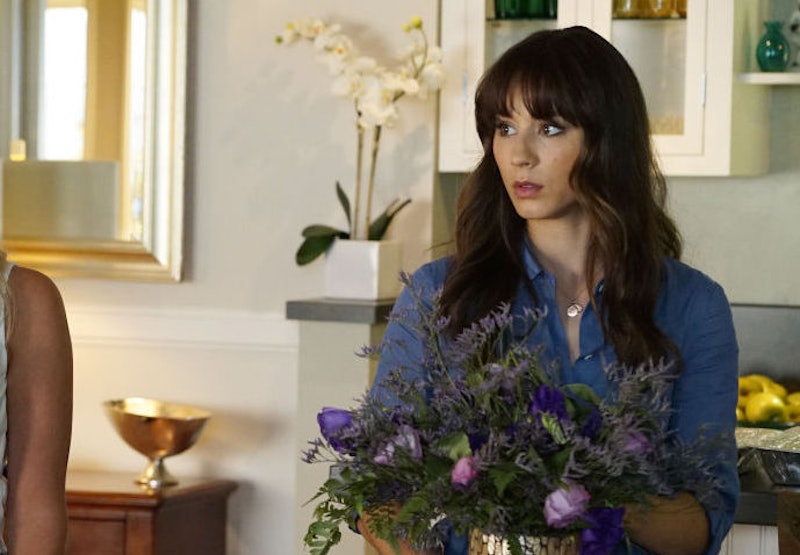 Considering the sheer amount of insane plot twists that the Season 7A finale of Pretty Little Liars offered, it's difficult to pinpoint one moment big enough to change the course of the Freeform series forever. Though the 7A finale offered jaw-dropping moments like Noel's severed head rolling down the stairs and Mary's reveal that Spencer is her biological daughter, it also put two beloved characters in mortal danger. Spencer was shot, while her ex-boyfriend Toby — with whom she shared one "final goodbye" kiss before he left Rosewood with his fiancée Yvonne — was involved in a devastating car crash that looks as if it might have been fatal. These two incidents seemed to, eerily, occur pretty much at the same time, which is begging a lot of theories — including this one by Reddit user prettylittleangry, which suggests Toby may die, and — if he's an organ donor — his heart would go to Spencer to save her life. Could this be a tragic end to Spoby's love story that fans never saw coming?

So imagine: Toby is taken to the hospital, where he is dying/dies. It's noted that he's an organ donor. Spencer then arrives at the perfect moment and needs an organ transplant to live (let's just say it's a heart she needs). Spencer goes on to grow old in the house Toby built her with his heart beating inside her chest... Also, Wren is the open heart surgeon, for obvious reasons. But he's also A so he leaves a cryptic message in there when he closes her up.

It's a seriously bittersweet theory for fans of the former couple — but considering that there are no coincidences in Rosewood, it's one that would make a lot of sense. Consider how Spencer and Toby left things: The former couple exchanged a tearful goodbye in the episode "The Wrath Of Kahn," and then they said goodbye again with one final kiss in the finale. It doesn't seem like this OTP-level romance will be on again soon, especially given Spencer's new romance with Detective Furey, but maybe they can be bonded in a different way: like, for instance, through Spencer using Toby's organ to live a long, happy life.

Sadly, of course, if Toby were to donate his heart or another organ to Spencer, that would also mean that he died in the car crash, and therefore, wouldn't be involved in Season 7B. However, Toby perishing would also make a lot of sense, as sad as that twist would be: Right now, it seems that the show is on track to reunite former couples Haleb, Emison, and — if Ezra and Aria reunite even with Nicole's return — Ezria. Sure, there's no guarantee that all of these pairings will make it to the final 10 episodes, but I can't imagine the writers of Pretty Little Liars reuniting all of the couples from the early seasons of the show. After all, not every high school couple gets their happy ending, and PLL isn't exactly one for happily ever afters — though it is one for bittersweet, dramatic endings.

Only time will tell us whether Toby survived the car crash, and if Spencer will recover from her gunshot wound. I don't know about you, but I'll be biting my nails in anticipation until the show reveals all in April 2017.