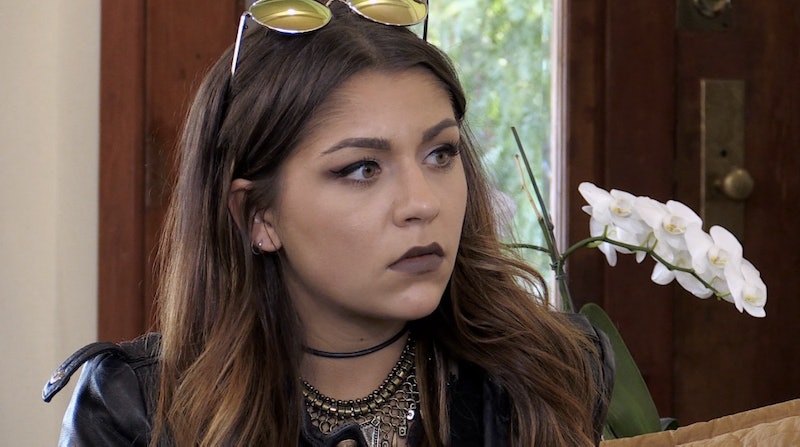 Tons of people have their photos stolen by the people we see on Catfish, but can you imagine how much it happens to celebrities? That's what the show is tackling this week... and on a much larger scale. On Wednesday's episode of Catfish , YouTuber Andrea Russett wants to know who's been using her photos to share hateful messages, especially since whoever the catfish is has taken it a step further to create their own version of her world with profiles of her friends and family. Sounds scary, right? Don't worry, it gets worse.

And although this is a subject that Nev and Max have faced before, this time, it's even more challenging with so many profiles in the mix. So their solution? Email everyone they've seen communicate with these profiles and wait for replies. But all that does is confirm that this web the catfish has weaved is super tangled. And then, they end up talking to Alex, who's spent all this time thinking he's close with the entire Russett family and that he's been dating Andrea, even though they've never met face to face. Yep, this is complicated, but at least it was another clue — even if it is a heartbreaking one.

As per the Catfish tradition, "Andrea" could never video chat, although they did talk on the phone. And at some point or another, Alex has been in contact with all of these connected profiles, thinking he's friends with all of them. And it was hard not to feel for him when he met the real Andrea and it confirmed for him that everything had been a lie. But fortunately, they do manage to get down to the bottom of it. "Andrea" and her family is actually a girl named Zoie. So what's her deal?! Off they go to Atlanta to find out!

Fortunately, once they met her, she started their conversation with an apology and admitted she was being selfish and used the profile to "find something she didn't have." Obviously, Andrea and Alex were pretty upset, but at least Zoie was super sorry. It's a little too late, but it's something. And once she told her story, it became clear that she's gone through a lot — an abusive relationship, a pregnancy, and a miscarriage? That would make anyone do something that's out of character.

Ultimately, Andrea and Alex were able to offer their forgiveness, and it seems like everyone's doing way better these days. Hopefully, Zoie's learned her lesson — and she's living a much happier life. After everything she's been through, she deserves it!