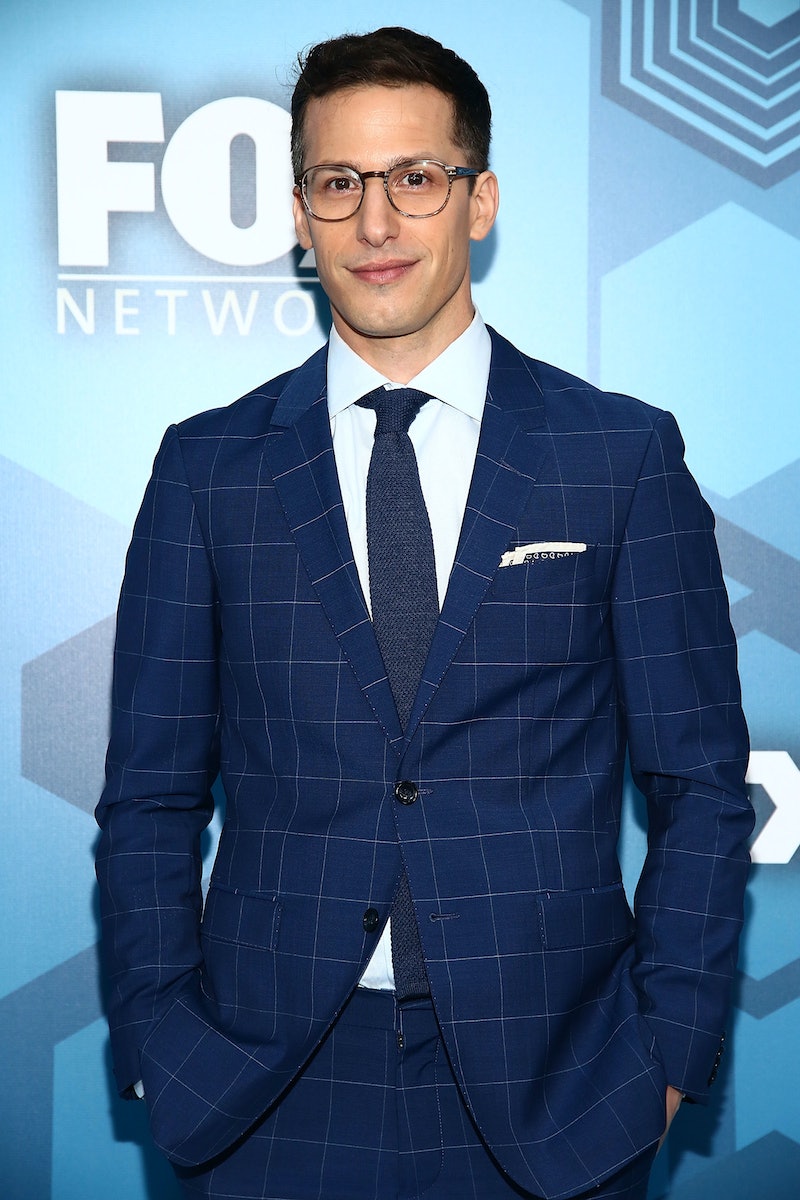 Andy Samberg's latest project revisits the age-old question: Where do babies come from? The adorably heartfelt animated film Storks starring Samberg, Kelsey Grammer, Jennifer Aniston, Ty Burrell, and Katie Crown depicts a universe where babies, by request, are signed, sealed, and delivered by storks. Because, is there another way? In the film, Samberg plays Junior, a stork this close to being promoted to boss, and just when he thinks he will stop at nothing to make that happen, a baby comes along and changes his plan in the most unexpected ways. Although Junior goes lengths to suppress his feels from baby cuteness, he unwillingly lets his paternal instincts get the best of him. Samberg, who's yet to become a dad, can kind of, sort of relate.

While promoting the film in Los Angeles, I asked Samberg, who's been married to musician Joanna Newsom for three years, if the experience made him think about fatherhood and how he'd be as a dad. His response was the most Andy-Samberg thing of all-time. "I would be a terrible dad," he says. Immediately, everyone sitting in the press conference gasped. "Well, no. Hear me out," he says, "It’d be so much more fun!" Wait, what? Am I missing something?

At that point, producer and father Nick Stoller (Forgetting Sarah Marshall, Neighbors) backed him up, saying: "The more irresponsible you are, the more fun it is." OK, someone gets him. "That’s my whole point! Blow the whole thing up," Samberg half-jokingly says. But like Junior, the thought of cute babies seems to melt his heart. "I’m sure if I ever have a kid, I’ll change my tune," says the 38-year-old. Cue the parenting advice from co-star and father of six, Kelsey Grammer. "You have to take turns being mean. Everybody gets to be fun, everybody gets to be mean," he says. "Gotta be a team. Not a team player, you won’t be a team." Noted.

Of course, since the film explores the storks myth, what would this press conference be without talking about where babies really come from? Probably an unproductive one. Thankfully, a fellow journalist asked Samberg how he learned about "the birds and the bees," and although storks were never involved in his sex education, that doesn't mean his experience learning about reproduction wasn't... colorful.

The Where Did I Come From book is how my parents sort of [told me]. They just sort of casually left it out on top of a stack of Playboys, things like that. I think at some point we had the awkward conversation about it. I grew up in Berkeley, so, it was pretty discussed. On the streets. Telegraph Avenue, just talked to people, like, ‘Where do babies come from?!’ And they’re like, ‘Oh! Come over here, little guy!’

It seems everyone had a say in Samberg's sex ed. And yes, the legendary book exists:

Beyond unorthodox methods of learning about babies and sex, Samberg explains what drew him to the project. "I always say, like, ‘You gotta find your flock,'" he jokes. "Find Your Flock," is the movie's tagline, by the way. "I just say that. I met with Nick and I was like, ‘I think that we are on the same page!,'" he says. But again, he let his soft side come out. When reflecting on the movie's themes of love and family, Samberg says, "It’s really sweet."

Let's hope Samberg inspires parents and parents-to-be to implement similar methods of sex education that he grew up with because let's not lie: They're kind of amazing. Storks hits theaters September 23.