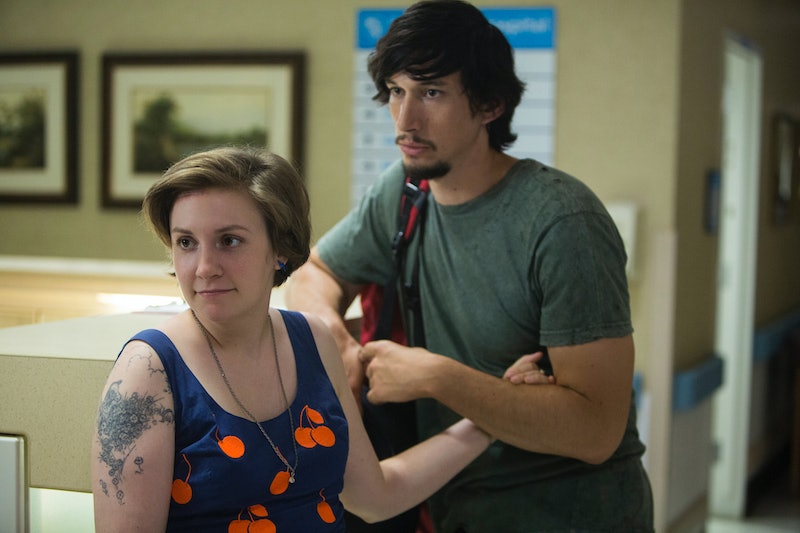 At the end of last Sunday's episode of Girls, Hannah grabs onto her boyfriend Adam in order to try to stop him from leaving her. Adam, the aimless hipster, has suddenly become a responsible guy this season; a serious and conscientious grownup overnight, all thanks to a job acting on Broadway. When Adam finally broke free of Hannah's white knuckles, I found myself whispering to my TV: Let him go, honey, he's already gone. And I should know. I watched my boyfriend Tom, as well as our relationship, similarly transform when he got a part in a play.

Although Tom wasn't as edgy or free-spirited as Adam, he was an outsider in our sports-oriented Bronx neighborhood. Not only did he not play sports — he didn't even like to watch them. Not fitting in was something Tom and I had in common. I was the only one my friends who ever talked about eventually moving to Manhattan, and like Hannah, I too knew I wanted to be professional writer.

I went to every show, and even brought guests so that Tom would know I was proud of him. Secretly, like someone doing jail time, I counted the days until his final performance. But even after the curtain went down for good, I found I now saw Tom very little. He had discovered that there was life outside our neighborhood, and he didn't want to come back — even for me.

Once we started dating, the fact that Tom had no need to hang with the guys was just fine with me. I loved that while other girls had to watch their boyfriends play football, I got to stroll around the neighborhood holding hands with mine. But while being a non-jock didn't really bother Tom, not having a hobby did.

One day, Tom suddenly joined a women's theater group in Manhattan. (I was confused as well.) The group usually put on shows with all-female casts, but that season, they were branching out and putting on West Side Story — so they needed male actors. A couple of guys Tom knew from school were going to try out, and he claimed that he'd simply gone along for moral support. But the fact that he could carry a tune and was extremely handsome scored him, along with his two buddies, a role as a Jet.

Tom was nonchalant at first, saying the whole thing was just way to pass time. "It's only a few times a week for a few weeks, then a couple of performances over a weekend or two,” he said. “No big deal."

But these people meant business. Tom was tied up with rehearsal four nights a week. The cast took Fridays off, then practiced all day Saturday and Sunday. Like Hannah, I tried to be supportive. I never complained about how little we saw each other, or that we stayed in on Saturday nights because he was tired and had to get up early the next day.

Tom took to acting like it had always been his passion. He went for dinner with cast-mates after rehearsal (so much for being too exhausted) and started partying with them on Friday nights. He loved finally having a crowd to be a part of, and acted as though he was doing me a favor by not asking me along since, as he put it, all the cast did was "talk about the show." My patience started to wear thin, but Tom would charm me by thanking me for being so understanding.

As I suspected, the female performers had found a new crop of guys to get crushes on, and two in particular were interested in Tom. One of them was even cast as his girlfriend. Tom denied that anything was going on, and I in turn pretended to believe him. I wanted to.

Tom was so entrenched in his new life that I was shocked when he actually gave me a free ticket to opening night. After the show, everybody from the cast went out. I took it as a good sign that I was invited, but when I was introduced to the guys in the cast they just put their eyes down and shuffled their feet in that, there's gonna be trouble kind of way.

I went to every show, and even brought guests so that Tom would know I was proud of him. Secretly, like someone doing jail time, I counted the days until the final performance. But even after the curtain went down for good, I found I now saw Tom very little. He had discovered that there was life outside our neighborhood, and he didn't want to come back — even for me.

I lost him to the bright lights, the talk of agents and auditions, but most of all, to New York City. Even though I dreamed of a bigger life than the one I had (and was a jealous that Tom had beaten me to it), I chose not to follow him. Instead, I followed his lead and hurried along my plan to start a new life alone, where I too would belong.

More like this
Owen Warner's Net Worth Might Surprise 'I'm A Celeb' Fans
By Sam Ramsden
You’ll Most Definitely Recognise Kyle Pryor’s Soap Star Girlfriend
By Sophie McEvoy
Is Blake Lively Or Penn Badgley The Richest 'Gossip Girl' Star From The OG Series?
By Hugh McIntyre
'Gilmore Girls’ Lauren Graham Just Revived Our Hopes For A New Reunion
By El Hunt
Get Even More From Bustle — Sign Up For The Newsletter