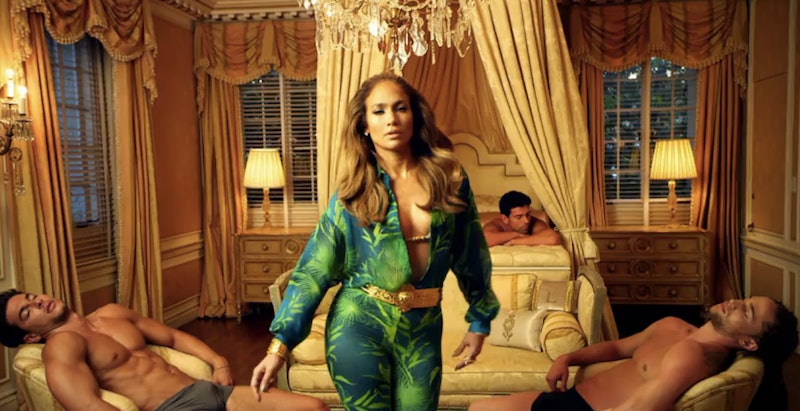 Seriously, is today 2001 or something? First the Backstreet Boys announce a summer tour and now Jennifer Lopez drops a new single and music video ... in which she dons a jumpsuit that’s a callback to her infamous 2000 Grammy’s Versace number. The message of J. Lo’s new video for “I Luh Ya PaPi” is both a departure and almost exactly the same as her “Jenny From the Block”/TRL era of music videos — the look is identical, but this time around she’s reversing gender roles and placing a plethora of scantily clad men (try counting the amount of banana hammocks in this video, it’s impossible) around her, on yachts, washing cars, and lounging around mansions.

As the preamble to the video will tell you, it’s a tongue-in-cheek play on the overtly sexist and recycled motif of many, many male artist music videos. Naked women, champagne, entourage, money, etc.

And though Lopez and her dancers/BFFs do call out the ridiculous ideas the sad, sad white director man offers them in the beginning, noting, “Why do men always objectify the women in every single video?” there’s still something about the clip that’s not wholly impactful.

Overall, the video reads as passive. The lyrics for “I Luh Ya PaPi” also aren’t making any sort of bold statement. It’s sort of like a lazier version of Bey’s “Partition,” except in J. Lo’s version, it’s only about a man receiving pleasure from a very eager, and perhaps submissive woman. And quite frankly, the video didn’t do enough to read as satirical. Sure we get a glimpse of a male model twerking, but we need the camera to spend a little more time on it in order to comment on how absurd it really looks. I can’t quite say if the juxtaposition of the video to the lyrics is supposed to add depth, or if it was just a missed mark.

There’s been plenty of debate going on in the post-Beyoncé secret album drop era to which we all live in about the kind of multi-facted feminism that can exist — a feminism that isn’t all or nothing, but one that exists in grey areas of sex, love, marriage, motherhood, and politics. However, my issue with “I Luh Ya PaPi” is the very fact that it’s neither here nor there on the feminist spectrum.

Its approach is more “cute” than “powerful,” and that’s just not enough. Still, it’s a step in the right direction. The more artists like Lopez make commentary about the status of women in the industry, the more the conversation will continue, and that is always a good thing.