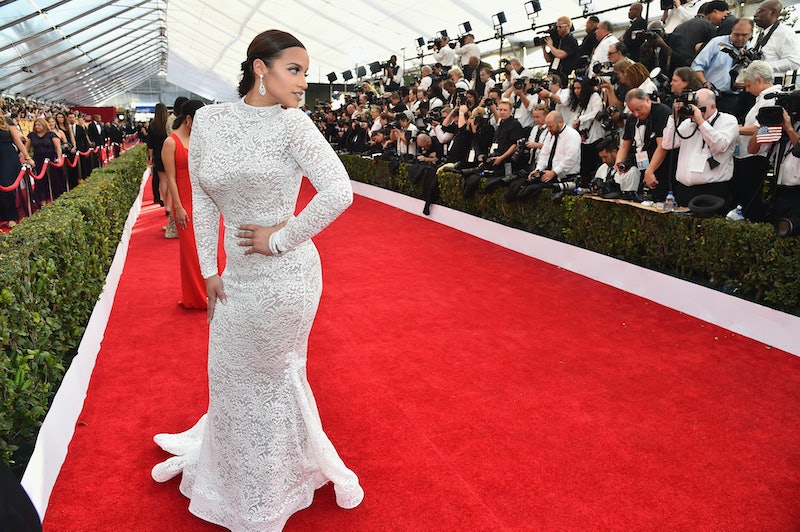 For Joy and Orange Is The New Black star Dascha Polanco, finding designers who love her work and respect her acting prowess isn't a problem. Polanco is, after all, a leading actor on an Emmy-winning, cult favorite Netflix series. But getting designers to dress her is a different story. I spoke to Polanco on the heels of her show-stopping VMAs red carpet appearance, where she wore a look by Yuna Yang — one of the few designers who has agreed to work with Polanco and her body type, the actress says over email.

"The experience has been struggle, honestly," Polanco says of finding designers during awards season. "It surprises me to hear high-end designers [say], 'But we don’t have samples in her size.' Really? I don’t understand if it’s referenced as a sample, wouldn’t it be a sample in every size?"

And it's not that the designers simply don't have Polanco on their maps. In fact, Polanco says most of them follow up excuses for not being able to dress her with a compliment.

"...for the most part they just don’t respond or try to make it work, but then state, 'Oh, but we love her on or Orange Is The New Black or Joy,'" Polanco says.

If you've ever watched Polanco walk a red carpet or give an interview, her confidence is one of the first things that grabs your attention. So how has the experience of being turned down by designers affected her perspective? Polanco says she's that while she's not immune to the difficulty of staying confident, she also knows how to let the struggle to make her better.

"It’s hard to stay confident," Polanco says "But, that just ignites me when I get to the carpet to show that there’s amazing talent out there [in terms of] new designers."

Despite the frustration that comes from dressing for awards season — something that Polanco describes as "a roller coaster ride" where "everything goes wrong," the actress has taken the lack of support from the majority of designers and turned it into something incredibly positive, creative, and collaborative.

"My team and I don’t focus on the designers who do not have my size, and to me that’s OK because it gives me the opportunity to work with talented new up-and-coming designers that are looking for the same opportunities I look for in Hollywood," Polanco says.

The 2016 VMAs were one of the times that Polanco was able to work with a unique designer to push the boundaries in terms of what's expected or typical for the red carpet. It also gave Polanco the opportunity to wear a trend that's often considered "off limits" for curvier body types. But Polanco doesn't really believe in fashion rules, as you can tell, and the choice paid off.

"The Korean designer, Yuna Yang, approached us and expressed an out-of-the-box look for me that she has developed. When we met with Yuna, I was excited to explore the idea of a train without wearing a ball gown and wearing one with my favorite comfy jeans," Polanco says. "Yuna’s signature is beaded jeans and it’s a trend as a curvy woman I had been afraid to try on."

In addition to Yuna Yang, Polanco says designers like Phillip Plein and Dolce & Gabbana have also been supportive and open to taking risks, but that she knows that any red carpet appearance she has is less about what she's wearing, and more about her as a person — an important reminder for any woman, regardless of whether or not we're heading to an award show anytime soon.

"...at the end I always learn that’s it not just what I am wearing or how I am glammed up it’s me as a person," Polanco says. "It’s all about how I carry myself that makes everything else shine."

More like this
I Tried Kendall Jenner's No-Pants Look As A Plus-Size Woman
By Sarah Chiwaya
'Love Island's Will Got A Farm Animal Manicure & It's *Adorable*
By Sam Ramsden
8 Bennifer Outfits That Stand The Test Of Time
By Avery Matera
Megan Fox & Machine Gun Kelly Are A Masterclass In Emo Couple Dressing
By Avery Matera and Allie Fasanella
Get Even More From Bustle — Sign Up For The Newsletter
From hair trends to relationship advice, our daily newsletter has everything you need to sound like a person who’s on TikTok, even if you aren’t.