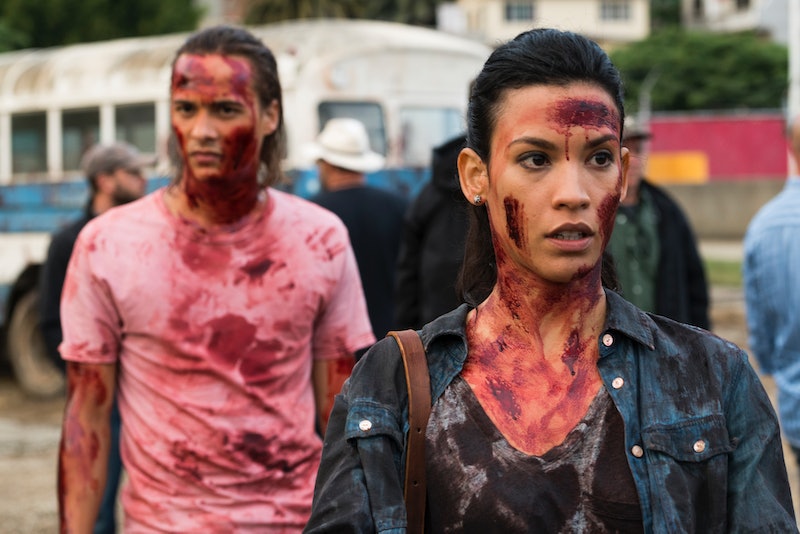 For a show with the word "Fear" right in the title, Fear The Walking Dead often seems more at peace with the apocalypse than some of our friends in Atlanta ever could. Nick got what some could consider a rude awakening when he witnessed a ritual unlike anything he'd seen before while staying with his new hosts in La Colonia. However, what initially looks like a sacrifice, turned out to be more of a way to coexist with zombies and protect themselves from infection. In an interview with Bustle, Danay Garcia explained that La Colonia shouldn't be feared on Fear The Walking Dead .

"I don't see it as dark at all," the actress, who plays Luciana on the AMC series, says. "I see it as an act of love and kindness." As we learned in an earlier episode, when members of La Colonia become infected, they give themselves to the "wall" of walking dead that stands between their community and the outside world.

"I have a child myself," says Garcia, "and if by any chance anything happened that I could get infected with any kind of virus, forget about the walking dead, anything that could be contagious and could put my son or anybody that I love in danger — I would like to be removed. And if by being removed I protect them, that's the ultimate love."

Of course, goodbyes are hard, and this is a particularly scary and sudden way to say goodbye to someone. However, is it any better than shooting them in the head? This way, the infected are able to protect their people from beyond the grave — quite literally. When Luciana first sees Nick walking with the dead, she sees that he is taking what La Colonia is practicing to a different level. That insight gets him an invitation to the safe haven. "It's always important to have fresh minds that see the situation with a fresh mindset," says Garcia. "Because that's really how you survive."

La Colonia's relationship with the dead also has a lot to do with the setting. Garcia did a lot of research into this area to prepare for her role on Fear The Walking Dead. "I went deep and deep into the Mexican culture and their relationship with the dead," she explains, "and in Mexican culture they celebrate the Day of the Dead. They go to the cemetery and they party. They drink and the celebrate the dead." The more she researched, the more it became clear that this area and this culture was fascinating to look through the lens of the zombie apocalypse.

"Going deeper and deeper," she says, "there are three stages of death. There is the day you die. The day you are buried, and the day you're forgotten." Of course, with people rising from the dead, those last two stages become muddled. Still, as fans of The Walking Dead have known for years, it's the humans in the apocalypse that you really need to look out for. La Colonia seems to understand that better than anybody. "The living protect the dead and the dead protect the humans," Garcia says. Why haven't more communities figured this out yet?