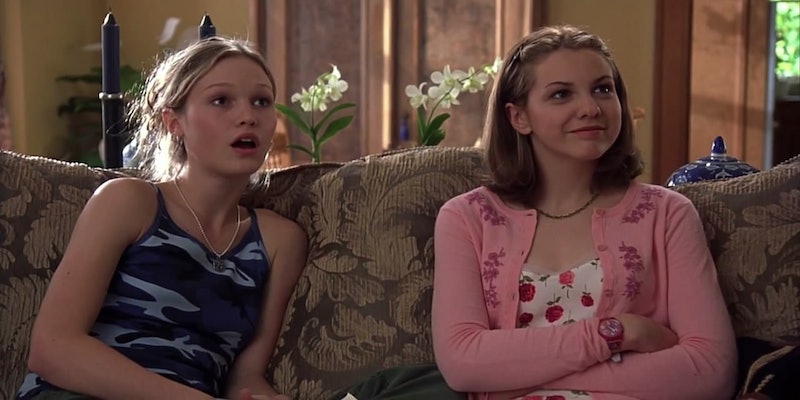 We have a lot of stereotypes we associate with the '90s, but none are so universal as '90s high school personality stereotypes. You can thank the huge popularity of teen films in the '90s for that. From horror like The Faculty to the romances like Ten Things I Hate About You and party films like Can't Hardly Wait and American Pie, the '90s (especially the late '90s) weren't lacking for teen sex, outsider goths, and mean jocks. Every generation of teen films has their own special stereotypes. You don't need to look much further than Molly Ringwald in the '80s, who was often the girl next door surrounded by a cast of specially nuanced personality stereotypes.

Of course, stereotypes are just that. They're not exactly reflective of how people really are. In reality, we're all dimensional characters with different personality elements all rolled into one. But to tell a story quickly, especially in the setting of a teen film, it's not always possible to explore what makes people people. So we get characters who express one characteristic only, and wind up with a sometimes hilarious mix of stereotypes to choose from. Here are 11 of the most recognizable high school personality stereotypes from the '90s.

1. The Ditzy Diva With A Heart Of Gold And A Brain That Doesn't Quit

If the '90s taught us anything, it's that the ditziest diva can actually be hiding a whip smart intellect and a heart of gold. From Cher Horowitz, this paradigm was carried through to the early '00s with everyone's favorite clever, pink clad heronie, Elle Woods. The pop culture-obsessed, fashion-crazy girl hiding a natural aptitude for learning and kindness was a steadfast in the '90s.

This character has almost always existed, but in the '90s was a true favorite. The dark horse, always kind of alternative and goth, had a soft side. Like the ditz, the misunderstood outsider reminded us that you can't always judge a book by its cover. Think Clea DuVall in The Faculty.

3. The Jock Who Makes Bets

In the '90s, if there was a jock, he MUST make a ridiculous bet. It was mandatory. Think Andrew Keegan in 10 Things or Freddie Prinze Jr. and Paul Walker in She's All That. The jock and the bet were a package deal.

4. The Nerdy Girl Who's Actually Really Pretty (If You Take Her Glasses Off)

Speaking of she's all that, the Cinderella story was big in the '90s. The geeky girl who would take her glasses off to reveal a real beauty, like in She's All That, gave all nerd girls the toxic idea that beauty was more important than any other valuable skills or personality traits. She had us all hoping one day our own Cinderella would be revealed, and I hope to never see this stereotype emerge as a favorite again!

5. The Dorky-But-Secretly-Hot Guy With All The Meta Cultural References

Did anyone else not secretly think Jamie Kennedy was hot in Scream? He was played as the culture junkie, but also was kind of cute, no?

6. The Sexually Awakened Teenage Girl Who Talks Like Samantha Jones

This is Natasha Lyonne's zone of terror. In American Pie, when everyone else was just trying to "lose it", she already had a mouth like Samantha Jones and was the encyclopedia for sex. In the Sex and the City generation, this was a definite high school stereotype: that there was one girl who was so knowledgeable about sex, but way to cool to care about being labelled as anything because of it.

7. The Annoying Jock Who Makes A Lot Of Sexist Jokes

As well as the betting jocks, there was also the nasty jock, who was kind of the butt of jokes as well. Like Matthew Lillard in She's All That, or Stifler in American Pie. These guys were assholes, sure, but things also tended not to go their way all the time...

8. The Friendzoned Guy Who Gets His In The End

The worst thing the '90s gave us was the idea of the friendzone. Ross Geller, thanks for nothing. In the '90s, "nice" guys with close female friends got the idea if they just hung around, and didn't take no for an answer, maybe slut-shamed their crush a little bit, and just kept generally being there, they'd get what they wanted. Think Joseph Gordon-Levitt in 10 Things.

10. The Popular, Do-Gooder, Girl Next Door Type Who Learned Lessons

Hello Jennifer Love Hewitt in Can't Hardly Wait! The '90s were full of very pretty, smart, girl next door types who realized through grand events that their lives weren't tied to appearing perfect. They almost always ended up with nerdy but super nice guys who really appreciated them. Maybe this is just a matter of art imitating life?

Oh, the virgin. There's a whole movie about these guys! The '90s was a time when losing virginity in high school was a paramount concern, even an obsession, and i'm glad this is a stereotype that has kindly died in movies.

More like this
How To Make A Dirty Shirley Cocktail
By Emma Garza
Everything To Know About 'My Big Fat Greek Wedding 3'
By Grace Wehniainen
Alicia Silverstone Has Recreated An Iconic 'Clueless' Scene
By Frances Stewart
Emma Thompson, Lashana Lynch, & Stephen Graham Lead Netflix’s 'Matilda'
By Sophie McEvoy
Get Even More From Bustle — Sign Up For The Newsletter