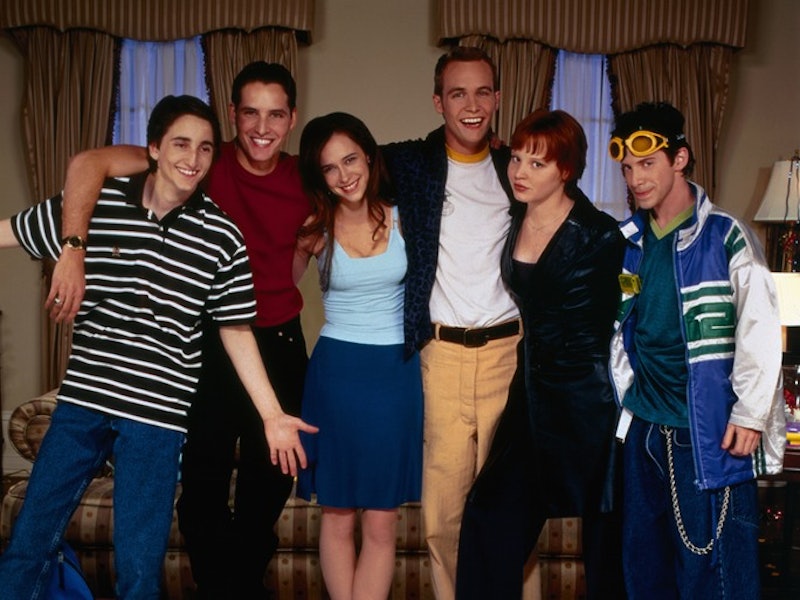 There are few things that spur more nostalgia than discussions surrounding the decade known as the 1990s. Along with tube tops, boy bands, butterfly clips, and dial-up modems, the '90s bestowed us with a smorgasbord of glorious teen cinema. One of the most beloved teen movies of the decade was Can't Hardly Wait, which included Seth Green, Lauren Ambrose, and '90s movie royalty, Jennifer Love Hewitt. If you find yourself wistfully re-watching the hit — and mourning the fact that there was never a sequel — you're not alone. Hewitt, herself, would love to see a Can't Hardly Wait reunion happen. On Sunday, Aug. 16, the actress took to Twitter to pay tribute to her time working on the film, and suggested that a second installment is well overdue. "Can't Hardly Wait reunion movie anyone?" she tweeted. "Let's get them to make it!"

Along with its stellar ensemble cast (which included Jason Segel for a bit, ICYMI), I Can't Hardly Wait was chock full of '90s teen movie tropes, which helped make that decade of cinema so addictive. There was the shy guy pining after the popular girl, the magic of slo-mo entrances, and an entire college fund's worth of red solo cups.

In celebration of Hewitt's GENIUS suggestion (I'm not being facetious, here), and the glory that is '90s teen movie tropes, lets take a look at 11 things every '90s teen movie had — from villainous jocks, to impassioned speeches.

1. The Jocks & Cheerleaders Were Always The Villains...ALWAYS

At least a handful of members from the "popular clique" were equivalent to Darth Vader.

2. Makeovers Were The Answer To Everything

Apparently ditching your glasses and scrunchies were the key to romantic success in the '90s.

I am not in any way, shape, or form complaining about this one.

4. Random Serenades Were A Must

Who has time to study when you need to show the object of your affection how you feel by belting out "Can't Take My Eyes Off Of You" during lacrosse practice?

5. Every Student Was A Professional Dancer

No actual high school dance in the history of everything ever contained the type of coordination displayed in '90s teen movies.

Aforementioned romance was normally precipitated by Shy Guy pining after Popular Girl for years. Once Popular Girl would catch wind of Shy Guy's affections, she would initially have a look that read: "We have had a total of two conversations," before deciding "Ah, F it," and sharing an epic closeup smooch with Shy Guy. As one who likes guys who can talk nerdy to me, I don't mind this trope — regardless of how ridiculous it could get.

7. Someone's Parents Were Always Out Of Town

Sometimes the entire movie would take place at an epic rager — complete with a lifetime supply of red solo cups.

8. Everyone Was On A Mission To Lose Their Virginity

Case in point: The entire plot to American Pie.

9. Everyone Made A Bet At Some Point

Whether it was who could transform the reclusive art student into prom queen, or who would bid adieu to their V-card first, gambling was a prominent theme.

I don't care how catty you are, tossing away a perfectly good drink is beyond wasteful. Enjoy being parched for the rest of the evening! SMH.

11. Impassioned Speeches Were A Must

Often times, these monologues would double as completion of a class project — talk about a twofer!