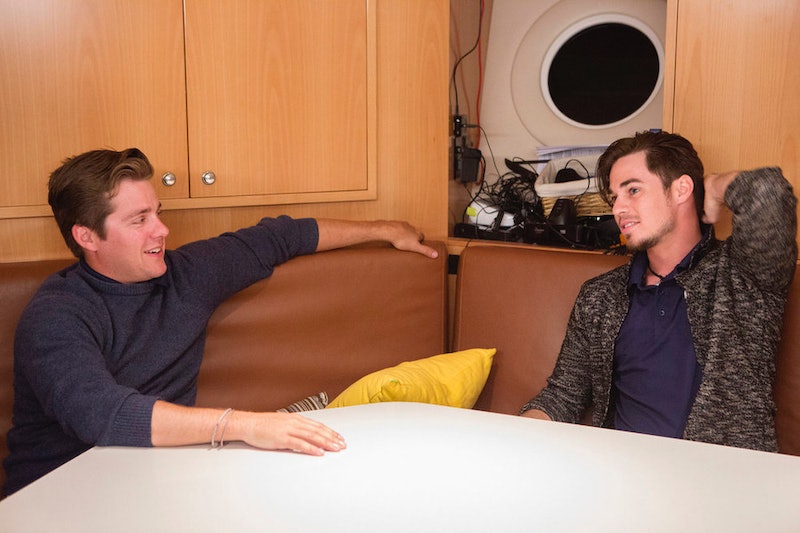 Now in its fourth season, Below Deck's crew has finally found a good working rhythm, but there's one big absence — why didn't Eddie Lucas return for Below Deck Season 4? For the first three seasons of the show, as a deckhand and then as the bosun, he was the bright spot of optimism and professionalism even when the rest of the crew was going wild. But Season 3 wasn't a great time for Eddie, and if you've watched it, then you likely understand that he may not want to return to TV. (Bravo did not comment on Eddie not appearing in Season 4.) His always-professional demeanor slipped, he had a rocky relationship with Rocky Dakota (sorry about the pun), and his relationship with his girlfriend was clearly in crisis. Together, that doesn't add up to the most successful year.

After Season 3 ended, Eddie retreated from social media, deleting both his Twitter and Instagram accounts, so it's not clear exactly what he's doing right now instead of promoting Below Deck Season 4. However, based on his previous gig, I'd assume that Eddie is probably working on either a different yacht or on a tugboat, the way he did while he was off from filming Below Deck . Even though he didn't have a great season on the show, outside of that, his career was going well, and I hope he's continuing to progress.

Even though Eddie isn't on Below Deck this season, the rest of the crew has nothing but nice things to say about him. Bravo caught up with some of the Below Deck cast a few months after the season ended and asked who'd they been talking to. Ben, Connie, and Rocky all name-checked Eddie, but the most interesting perspective came from someone else.

Captain Lee also spoke to Bravo about Eddie in a separate interview and shared his thoughts on what happened in Season 3. It makes sense that he'd have a lot to say, as Eddie's relationship with Captain Lee was always pretty deep. The two naturally got along, given that they were both types who liked to get their work done rather than get jealous of the guest's luxurious lifestyles. That sailor mentality means that even though Captain Lee was disappointed with what happened last season, they've maintained a strong relationship. "I still think Eddie is a great guy, and I think he’s got a great future. I just think he lost his way a little bit, as everybody does," Captain Lee told Bravo. "It’s not whether you get knocked down or not — because everybody’s gonna get knocked down — it's how you get back up."

We may not be able to watch Eddie get back up on Below Deck Season 4, but I hope that he's found just as much success off-screen.

More like this
Who Is 'Stranger Things 4' Fan-Favorite Joseph Quinn Dating IRL?
By Grace Wehniainen
A New Season Of The Midwich Cuckoos Could Be Coming “To A Town Near You”
By El Hunt
The ‘Love, Victor’ Showrunner Gave Fans Hope For A Possible Spinoff
By Brad Witter
Everything We Know About When To Expect The Rest Of The Upshaws Season 2
By Kadin Burnett
Get Even More From Bustle — Sign Up For The Newsletter