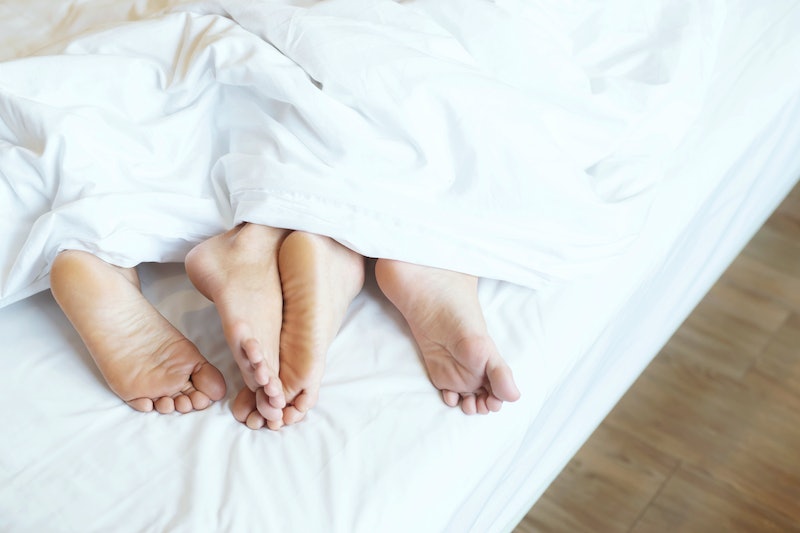 For several glorious decades, most sexually transmitted diseases could be cured with relative ease. After a trip to the doctor and a round of antibiotics, business could resume as usual, aside from a newfound tendency to break into braying, hysterical laughter and change the subject whenever chlamydia came up in conversation. Unfortunately, the end of an era may be upon us; according to the World Health Organization (WHO), three common STDs are becoming untreatable thanks to — you guessed it — a little thing called antibiotic resistance. You know, because sex wasn't awkward and messy enough on its own.

On Aug. 30, the WHO released new guidelines for the treatment of syphilis, gonorrhea, and chlamydia. Because all three STDs are caused by bacteria, they're typically cured with antibiotics, but recently, all three have reportedly begun to develop resistance to treatment. You may have already heard that gonorrhea is the worst culprit; earlier this summer, the Centers for Disease Control (CDC) announced that resistance to azithromycin, a common antibiotic, was emerging among gonorrhea strains in the United States. However, the WHO said in a press release that "antibiotic resistance in chlamydia and syphilis, though less common, also exists, making prevention and prompt treatment critical." According to NBC, antibiotic-resistant strains of syphilis and chlamydia aren't common in the U.S. yet, but they're becoming more frequent across the globe.

Last November, the CDC announced that STDs rates had risen in the U.S over the course of 2014; according to their report, around 20 million new infections occur every year. Half of these occur in people between 15 and 24 years old, and women are affected more often than men. Although gonorrhea has developed the strongest resistance to treatment, chlamydia was the most common STD, with 1,441,789 cases reported in 2014. However, syphilis saw the biggest increase — 15.1 percent between 2013 and 2014. The report also noted an increase in syphilis infections among young men, especially those who are gay or bisexual.

Needless to say, these infections can cause serious problems if they aren't treated. Here's what the WHO had to say in its announcement:

"When left undiagnosed and untreated, these STIs can result in serious complications and long-term health problems for women, such as pelvic inflammatory disease, ectopic pregnancy, and miscarriage, and untreated gonorrhoea and chlamydia can cause infertility in both men and women. Infection with chlamydia, gonorrhoea and syphilis can also increase a person’s risk of being infected with HIV two- to three-fold. An untreated STI in a pregnant woman increases the chances of stillbirth and newborn death.

It's alarming news, but don't freak out just yet. STDs are preventable, and becoming infected is hardly the end of the world. (You can find the CDC's guidelines to STD prevention here.) Furthermore, the WHO isn't prophesying doom; the news comes as part of revisions to its treatment guidelines — not every STD is curable, but there are still ways to treat an infection. Most importantly, if you're sexually active, communicate with your partner, get tested regularly, and make sure you're using protection correctly.