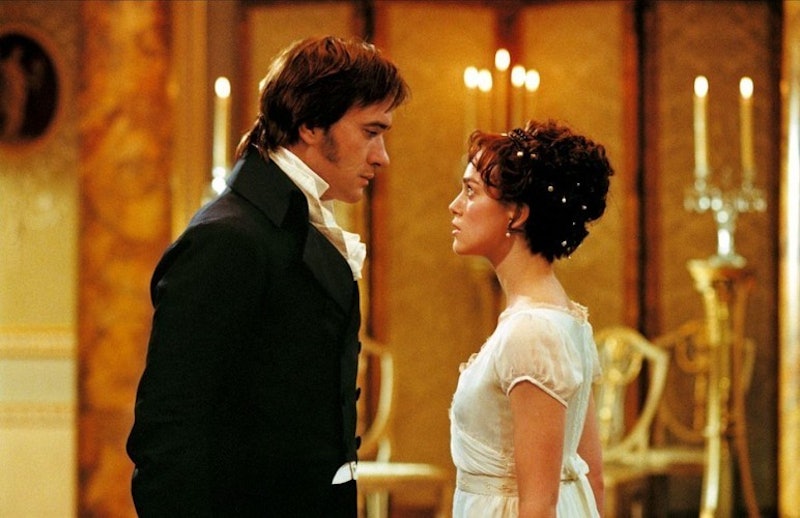 If you love Jane Austen, you’ve probably joked at some point that she ruined your love life.After all, if you’ve read Captain Wentworth’s letter to Anne in Persuasion or Mr. Darcy’s declaration of love to Lizzie in Pride and Prejudice, you probably have "you pierce my soul"-level standards. On the other hand, reading Jane Austen can actually have a supremely positive effect on your relationships. I’m not just talking about romance — I’m talking about relationships with your friends, your family members, even yourself.

Here's the thing: Jane Austen’s novels aren’t just about romantic love. Sure, they often end with a proposal or a marriage, but part of what makes her novels so compelling is that they explore the intricacies and importance of female relationships. All of those relationships. Austen was the queen of observing people and crafting realistic (and often hilarious) characters, and while it’s easy to swoon at characters like Mr. Darcy and laugh at the Mr. Collins types, there’s actually a lot to learn about relationships in general. As a self-proclaimed Janeite, I’ve certainly gleaned a lot from her novels — here’s how her writing has impacted my relationships:

In Pride and Prejudice , Elizabeth harshly judges her friend Charlotte Lucas's choice to marry Mr. Collins. After all, Elizabeth herself would never marry him. But she learns that just because something is wrong for her doesn't mean it's wrong for everyone. That's a lesson everyone needs to learn, and one I reference in my relationships with my friends.

The families in Austen's novels are often pretty quirky. From Mr. Woodhouse's imagined health issues to Mrs. Bennet's constant matchmaking, it's easy to laugh at these hilarious families. But they also make me appreciate my own family. I love how quirky we are, and I think it's part of what makes us amazing — just like the Bennets.

3. I Now Know That Character Is More Important Than Charm

There are a lot of really charming men in Austen's novels. Willoughby from Sense and Sensibility , Frank Churchill from Emma , and Wickham from Pride and Prejudice all seem like really cool guys at first. Even Isabella Thorpe seems like the perfect BFF. But one by one, they are discovered to have less than stellar character. A charming attitude and a great haircut can never outlast character – Austen knows.

4. I Watch Out For My Siblings — And Love Them For Who They Are

As the oldest child, I've always felt the need to look out for my younger siblings (whether they want me to or not — they've got no choice in this matter, as I'm sure fellow oldest children can attest). The sibling relationships in Jane Austen's novels have taught me that this is important, but so is getting to know your sibling for who they truly are, and appreciating them for it. From the Bennet sisters, to the Dashwood sisters, to Catherine and James Morland, the siblings in Austen's novels are forces to be reckoned with — especially once they really see one another for who they are and love them for it.

5. I Understand The Importance Of Second Chances

So many of Austen's plots revolve around a second chance. After all, we're only human, and whether we mess up in a friendship or relationship (or, as often is the case in Austen's novels, a proposal), we can certainly benefit from a second chance.

6. I'm Learning To Be Patient

OK, I'm not really that patient. This is not my strong suit. But if Anne Elliot in Persuasion can pine after Captain Wentworth for eight years, I can ~try~ to be patient with all my relationships.