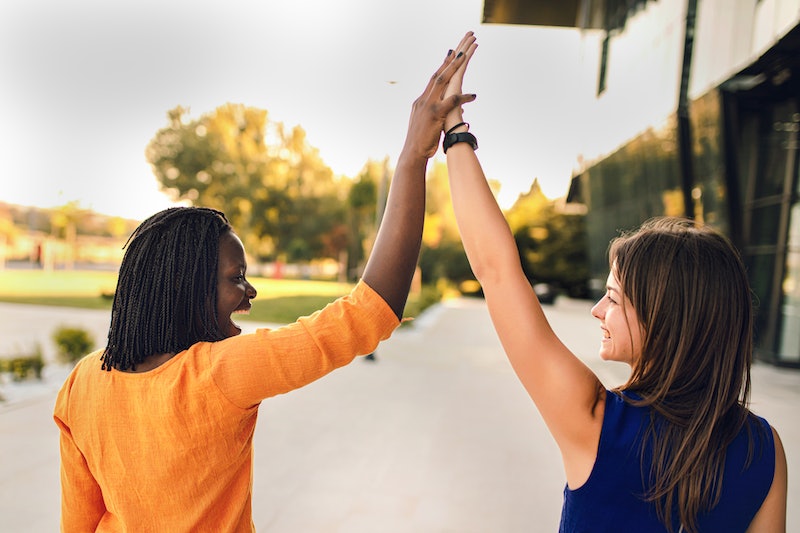 Cattiness, gossip, mean girl culture ... you can't blink these days without some reference to the way our culture teaches women to tear each other down. It's disheartening, to say the least — there are plenty of people in this world picking women apart without us turning on each other, too. Instead, shouldn't we actively being practicing things women can do to help other women? It's not as though we don't have examples to inspire and empower us: Malala Yousafzai, Gina Rodriguez, Sheryl Sandberg, Gloria Steinem, Emma Watson, Oprah Winfrey, Beyonce. Following in the stead of such fierce contemporaries (and the women who changed history before them), we can build a global community of empowered women.

Recently, I was pulled into drama involving a few of my friends over a Facebook post about — wait for it — selfies. Selfies. Let that sink in for a minute. Here was a group of five or six grownass women arguing with each other about selfies and what they say about the person taking them. Over the last few weeks, the issue has reared its ugly head more than once, and snarky comments have been lobbed with deft precision like lyrical grenades. Although I quickly extricated myself from the hostility, I haven't yet been able to shake the feeling that we live in a world that wants to see women fail. And since our greatest strength is each other, pitting us against one another has seemingly become part of some tactical strategy. We're pushed to judge one another based on patriarchal standards (i.e. selfies are crutches of women who are insecure or superficial) when, really, we should be standing in solidarity.

There are myriad ways women can help each other to this end, but here are five we could all stand to weave into our lives a bit more.

1. Cut Each Other Some Slack

Right? As women, we will be judged. Often, and unfairly. We will be scrutinized for decisions we make, even over something as inherently personal as our own bodies. Don't be part of the madding crowd; if we see another woman make a decision we may not agree with, but we have no great moral or ethical objection to, we can cut her some slack. Give her a pass. We don't need to tell her we think she's making a big mistake — there will undoubtedly be many others who do so.

We live in the digital age, which often means the collective narrative we see is one of perfection. It can be very isolating when your own life is less than stellar. We, as women, can be more inclusive by being honest with each other. Sharing the gritty truth of our lives with each other is beautiful, even when the stories we're telling are decidedly un-pretty.

This cannot be stressed enough. Celebrate each other. We are women, hear us roar, in numbers too big to ignore. Teach your daughters about women who are athletes and scientists and engineers. Follow the careers of women directors and producers in Hollywood, and feel good about spending $10 on a movie ticket that will help fight the depressing gender bias in Hollywood. Devour books by women writers, buy paintings from women artists ... show up for each other. Cheer for each other. CELEBRATE EACH OTHER. When we are in each other's corners, we can't lose.

Barbara Bush once said, "Some people give time, some money, some their skills and connections, some literally give their life's blood. But the point is everyone has something to give." As women, there are no bounds to what we are capable of. We all have individual strengths which we can, and should, share with each other. While it's certainly okay to be competitive when it is called for, we need to remember that one woman's success does not equate another woman's failure. There's enough room for all of us to win. Instead of actively trying not to betray our "edge" to the competition, we can help each other reach the next rung of the ladder.

Yes, women have so much power. But the reality is we do still live in a patriarchal society and, often, the people pitting us against one another are men. Part of solving the problem, therefore, is addressing its root. If we speak up when we hear a man make a derogatory comment about another woman and use our voices to educate men about things like feminism and gender bias, we create a ripple that spreads beyond the women in our own inner circles to women far beyond as well.