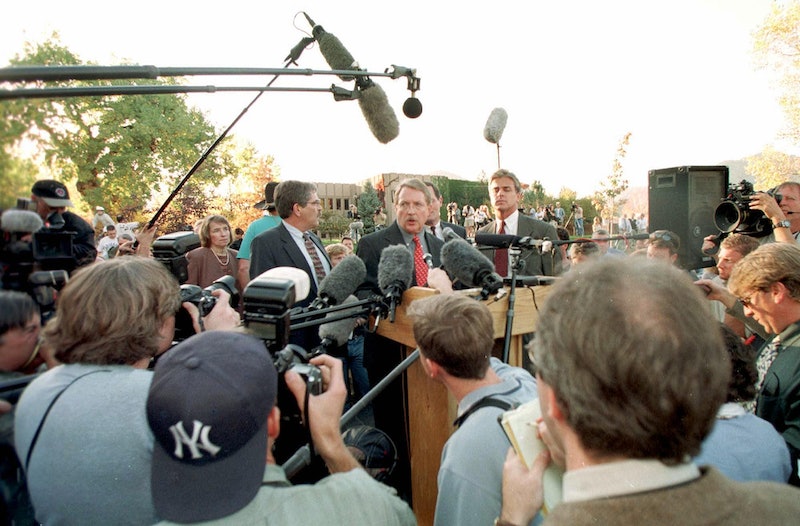 The Killing of JonBenet: The Truth Uncovered aired Labor Day on A&E, and it's bringing a fresh wave of attention to the 20-year-old unsolved murder. One of the central players in the case was the police chief in Boulder, Colorado during the early years of the case. He was a frequent source of criticism at the time — but where is Tom Koby now?

Koby was chief of the Boulder Police Department when Ramsey was found dead in 1996, and remained in that position until being replaced at the end of 1998. He was a symbol of the official investigation into Ramsey's death, and drew significant criticism of his handling of the case on a number of fronts. Some perceived him as having been tight-lipped about the investigation, for example, having given the media only scant details about its progress while simultaneously insisting that "our guy [Ramsey's murderer] won't walk." At the same time, the investigation yielded few leads, and it was later revealed that Boulder police didn't share DNA test results with the District Attorney's office immediately, further hindering any progress on the case.

Ultimately, the police officers' union cast a no-confidence vote against Koby, and Koby announced in 1997 that he'd leave the department by the end of the next year. He was replaced as police chief in June 1998 by Mark Beckner.

So, what's Koby up to now? He's kept a relatively low-profile since leaving the BPD, but according to a 2001 report in Rocky Mountain News, he soon turned his sight towards charitable ventures. In 1999, Koby became director of the philanthropic wing of Tango, a Boulder-based venture capital firm started by the founder of Boston Market. He described the project as a faith-based initiative that doled out money to community resources, such as homeless centers, without minimal strings attached. In one instance, Koby helped obtain funding for a task force aimed at improving the lives of Latino residents in Boulder.

Koby has been pretty quiet since then, and there's no word on what he's doing now. But according to Beckner, he allegedly has a much better time working in philanthropy than as the chief of police during the Ramsey case.

"I think he's living a much more stress-free life," Beckner told Rocky Mountain News at the time. "He's happier than he's been in the past couple of years."

Needless to say, working on such a high-profile murder case definitely took its toll on those involved in investigating the mystery that has yet to be solved.

More like this
What Is Happening With Sheku Bayoh’s Case?
By Sophie McEvoy
The Most Powerful Photos From The Weekend’s Abortion Rights Protests
By Melanie Mignucci
Police Shove 'Full House' Star Jodie Sweetin At An Abortion Rights Protest
By Radhika Menon
Where Is Oscar Torres In 'Only Murders In The Building' Season 2?
By El Hunt
Get Even More From Bustle — Sign Up For The Newsletter