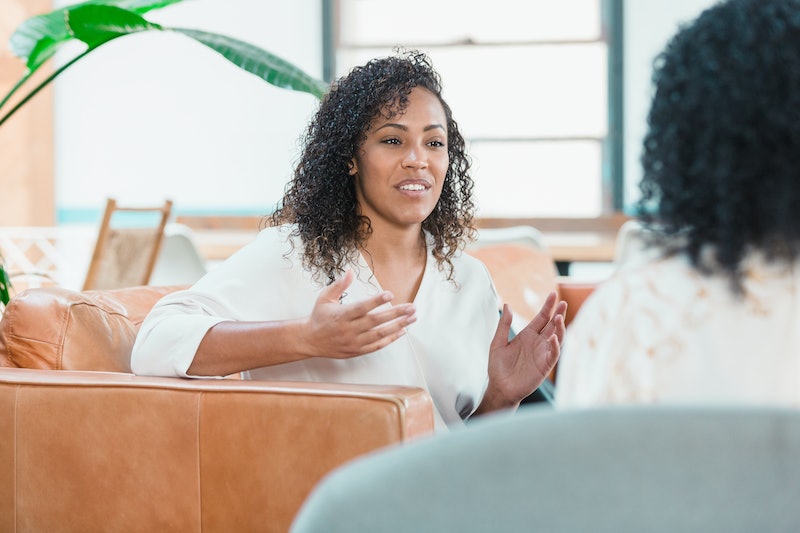 There are several different challenges when it comes to dating while mentally ill. The big one, though, is the disclosure problem: when do you disclose your mental illness to someone you're dating, particularly if you're just casual? Is there a set timeline? A social point after which it's a faux pas? An etiquette guide? (That'd be very useful, actually: The Official Guide To Manners In A Life Of Mental Disorder.)

It turns out that the expert answers tend to vary by particular case and by severity of disorder; there are general guidelines, but overall, the specific timing is up to you. And remember that it's normal to feel a bit of trepidation; the mental health discrimination organization Time To Change has found that a whopping 75 percent of people with mental disorders felt scared to tell new partners about it. The caution is understandable. Myths about mental disorders, romantic and otherwise, abound; people who introduce the fact of their diagnosis fear rejection by somebody cute, or being pegged as "crazy" and "undateable".

The right person, it should go without saying, will accept you and work with your diagnosis; the National Association for Mental Illness (NAMI) even points out that disclosure is a plus in relationships, helping "a supportive partner... feel closer to the person after they learn of their mental illness ... it can be an opportunity to grow together through the disclosure." If a person denigrates your condition or refuses to engage with or understand it, needless to say, they need to be kicked to the curb or re-educated, sharpish.

Here are some things to think about when it comes to when to disclose your mental illnesses to someone you're dating.

1. When It Influences Your Behavior

This is a piece of advice based around disorders that have distinct phases, rather than unilateral characteristics: depression that comes in waves, for instance, or anxiety that's triggered by particular stimuli. It's important to raise your mental illness, according to this way of thinking, when it starts to actively change your behavior within the relationship. For instance, Health Central gives a scenario in which a person with an anxiety disorder is invited on a date to a crowded space in which they would be at risk of panic attacks. That acts as a spur to disclosure; it requires negotiation and plan-changing with a date, and therefore your mental health needs to be on the table.

But this isn't as simple as it seems. People with long-standing disorders often note that many aspects of their behavior are affected by it, and that it forms part of who they are. "When it influences your behavior," in that case, is "always," and there isn't one particular "flaring" moment in which the symptoms become more or less noticeable.

This may seem like it contradicts what I just said, but the first point is about warning: many sufferers can begin to feel themselves entering a phase of disorder (a darkening of mood, for instance), and should warn any partners about what's about to happen as soon as they can. If you have the luxury, though, organizations like NAMI suggest that it's best to "talk about it during a calm time when you're not actively struggling with an episode of anxiety, depression, psychosis, or mania," as it will help you explain things clearly and respond to their concerns. Some people may worry that this makes their condition seem less believable to their date, but a person who doesn't believe you when you say you're diagnosed with a mental illness is not somebody you should be spending movie nights with.

3. When You Reach A "Serious" Stage

As far as advice on disclosure goes, this is one of the most common tips: that you definitely need to disclose if things are becoming "serious," though how that's defined is up to you (sleeping together, seeing each other multiple times a week, calling each other "partner" or "girlfriend," whatever). Psychologist Barbara Greenberg, for example, interviewed on the question by Mic, says disclosure should occur "whenever the relationship has matured to the point where it feels comfortable — usually, around the three-month mark."

This length of time does guarantee that you and your partner are well-acquainted, and there are benefits to long-term dating before you disclose; NAMI says that the value of waiting before telling them lies in the fact that "your partner probably already appreciates the personality qualities that have helped you live well despite a mental health condition. By sharing your health history," they add, "you share insight into not just your challenges but also your strengths."

"Serious," though, is relative. If you feel you can't enter into a sexual relationship with somebody, introduce them to your friends, or take them past any relationship "mark" that hits before three months without telling them about your disorder, that's a very valid feeling. You know your condition best.

4. When It Feels Safe

The notions of "comfortable" and "safe" are discussed a lot when it comes to mental illness disclosure in intimate relationships; that's what lies behind the three-month mark idea, but it could also be more subtle than a timeline allows. Safety, in this context, is usually the result of building trust, evaluating their reactions, and knowing with relative certainty that they won't throw a fit or decide that you're a flawed lunatic and run off into the sunset.

There is, as always, a caveat. For some people, their disorders are sufficiently intrusive that waiting until safety has been achieved is not feasible, or indeed particularly cool for their partner. "I would love to feel I could keep my mental illness under wraps until I was comfortable with someone, as if it were a hobby like collecting international Barbie dolls," writes Molly Pohlig, who suffers from various disorders including borderline personality disorder and depression. "But that seems both unfair and dangerous. Having a panic attack in front of someone unprepared is not great for building trust." In those cases, being upfront early isn't just polite, it's necessary.

Sometimes these things just come up naturally. If a date wants to know what's going on, if you're all right, and why you haven't answered their calls for three days, now is the time to give up the truth. Or maybe they just reveal their own issues over tacos on a particularly revealing date, and give you the opening to reveal your own. Either way, if it comes up, it is extremely important not to lie.

Statistics are on your side when it comes to disclosure; the mental health organization Mind explains that, according to a large survey, two-thirds of people with mental health issues and partners described their partner's reactions to disclosure as "unfazed" and "really understanding" and that only five percent of all the surveyed subjects, with or without partners, had dates break up with them when disclosure happened.

If you're struggling, look at it from the perspective of the person you're dating. If they're going to really care about you and support you, they need to know the realities of your condition; this isn't something you can keep hidden as a charming quirk. And if you feel worried about their reaction because of signals they've given about lack of acceptance, that's a warning sign about the relationship in general. Nope nope nope.

More like this
The Best Time To Date After A Breakup, According To Experts
By Bustle Editors
Expert Tips For Being On Top When You're Plus-Size
By Lexi Inks
7 Women Share Their Best Orgasm Stories
By Lexi Inks
Virgo & Sagittarius Zodiac Compatibility, According To Astrologers
By Kristine Fellizar
Get Even More From Bustle — Sign Up For The Newsletter