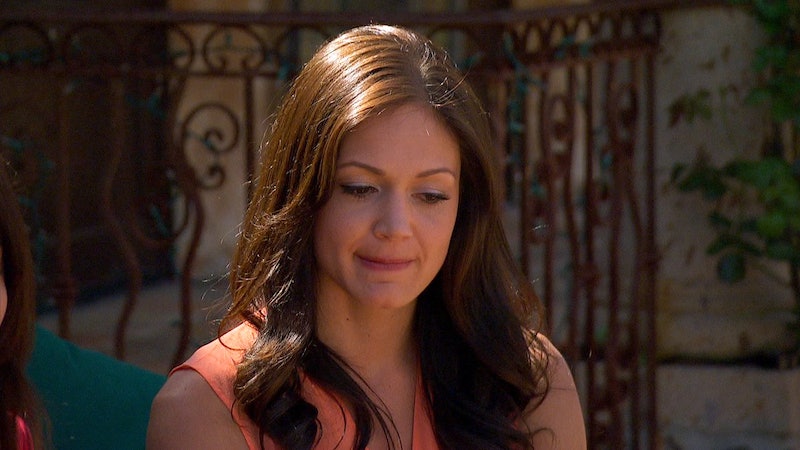 There's nothing more exciting to a Bachelorette fan than the hometown dates episode. They're just so painfully unnatural -- everyone's doing their best impression of their most comfortable selves, all while pretending not to notice that mom's a little slurry when she inevitably says, "we'd shlove to have you as partofthefamlly." It's awkward at its finest, and Bachelorette Desiree Hartsock's hometowns, in that regard, did not disappoint.

Even though her visits to Chris', Zak's, Brooks', and Drew's families went well, for the most part, there were still some of the classic OH GOD NO moments that always accompany a film crew's arrival in a way-too-clean living room in suburban America.

Here are the top 6 most awkward moments from last night's invasion of familial privacy.

First of all, that elementary school was like something out of a movie. But that glitzy, glamoury feeling didn't last long -- as soon as Des told the kids that Zak was her boyfriend, it was like, whoa, Sister Wives flashback. That simple declaration of boyfriendhood really drove home the point that so often gets lost on this show: Des lives like polygamist. Awks.

Zak's family couldn't find the words to express how much they love Des, so they took to song. Arranged in their family room like a pared down Von Trapp family, Zak and his brother and sister sang to Des: "You light the fire inside his eyes / You give him hope that love survives/ Oh, Desiree, now we can see / Your place among our family." This, after spending maybe an hour with her. There was hope that Des would react like the rest of us and hide her face in a pillow/glass of wine, but no. She loved it. And she cried. Double awkward.

Desiree sat down with Drew's dad Mal and the two had a heart-to-heart. Well, it was more like Mal was having a heart, and Des was just trying to follow the conversation. It was ostensibly sweet, but let's be real: it was a little much. Does no one on the show know how to pump the breaks? Seriously. Three seconds into meeting Des and Drew's family nearly kidnapped her, forced her into a wedding dress, and tricked her into signing something legally binding.

His family is nice, his brothers are good looking, he clearly comes from a decent amount of money; the guy's pretty perfect. But, awkward alert: he might not be that into Des. The poor girl spent her visit drooling almost over every corner of his life, and Brooks was all, yeah, sure, whatever, I guess I kinda like the girl. It was all Des could do from chaining herself to his mom and co-knitting a wedding dress out of Brooks' old flannels.

When Des was taken into Chris' dad's home office for a chiropractic back realignment, it was hard to tell if it was awkward, or awesome. Des, though, had no trouble assigning an adjective: put that girl one step out of her comfort zone and she's like a fish out of water. One woman's free back adjustment is another woman's nightmare.

It wasn't necessarily cringe-worthy that Des returned Zak's ring, it was the blatant editing that made the moment cringe-worthy. They had about a million camera angles on the ring return, and it was patently obvious that the producers had them do at least two takes. Poor Zak had to relive his rejection more than once, and everyone suffered the consequences.

Thanks for the uncomfortable laughs, Des. We're looking forward to more of the same next week.