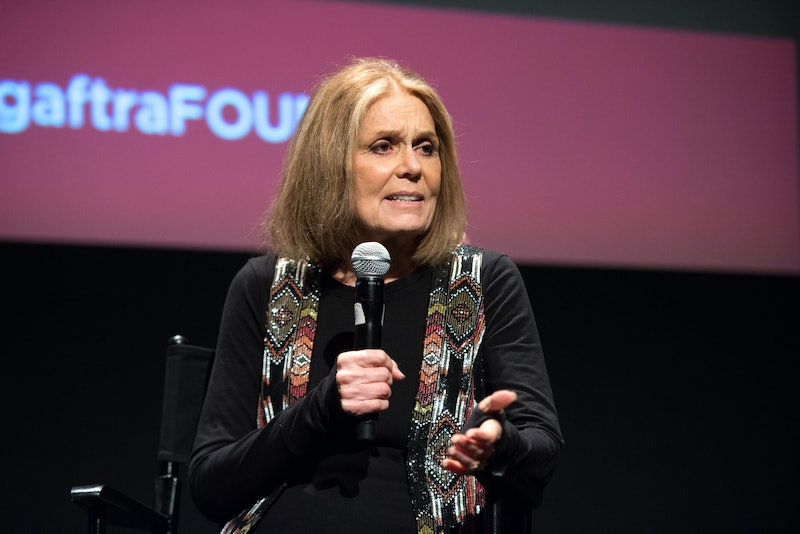 On Monday, conservative group Eagle Forum confirmed that its founder, Phyllis Schlafly, had died at her home near St. Louis in the presence of family. Schlafly, who was 92 years old, left behind a conservative — and controversial — legacy. Over the course of many decades, Schlafly staunchly opposed communism, abortion, and modern feminism. In doing so, she drew criticism from numerous feminists; among them was Gloria Steinem, who slammed Schlafly for her anti-abortion views and her ultimately successful campaign against the Equal Rights Amendment.

One particularly memorable exchange between Steinem and Schlafly took place in the 1970s, and manages to summarize many of the ways in which the two women didn't see eye to eye. According to The Washington Post, Schlafly once implied that all the women at a 1977 women's conference in Houston were gay. Steinem delivered a short but blunt retort: "If we're all lesbians, where are we getting all these unborn babies to kill?" But that was only one small element of a back-and-forth that spanned decades.

A central part of Schlafly's legacy was her opposition to the Equal Rights Amendment. She denounced an amendment protecting women's rights as unnecessary, and argued that it posed a threat to American family life. Steinem was, of course, on the opposite side of the issue. Whereas Schlafly didn't originally pay that much attention to the ERA — she only launched her Stop ERA organization once the amendment had passed the House of Representatives — Steinem was heavily involved in campaigning for it. She even testified before the Senate Judiciary Committee in the ERA's favor in 1970, but it still wasn't enough to get sufficient support.

Steinem's criticisms of Schlafly and other conservative women didn't simply fade into distant memory. She saw in Michele Bachmann and Sarah Palin what she saw in Schlafly: inevitability. "You know what you're saying is important when the power structure brings in people who look like you and think like them," Steinem told Newsweek in 2011. This was an allusion not only to the rise of the Tea Party and women who espoused its far-right views, but also to Schlafly's firm stance against much of what modern feminists represented.

Throughout their careers, Steinem and Schlafly took opposing stances on a number of issues, from marriage equality and abortion to feminism as a movement. However, many of their differences stemmed from a particular discrepancy: their views on family. After all, this isn't about pitting women against one another, but rather exploring the broad spectrum of political views exemplified in part by Steinem — a liberal, passionate feminist — and Schlafly — a conservative pro-family advocate.

Steinem's thoughts on and responses to Schlafly's campaigns over the years reflected the latter's relentlessly anti-feminist views. It's worth noting, though, that feminists like Steinem have long fought for women like Schlafly to be able to fight for they believe in, and they will continue doing so, regardless of the current political environment.