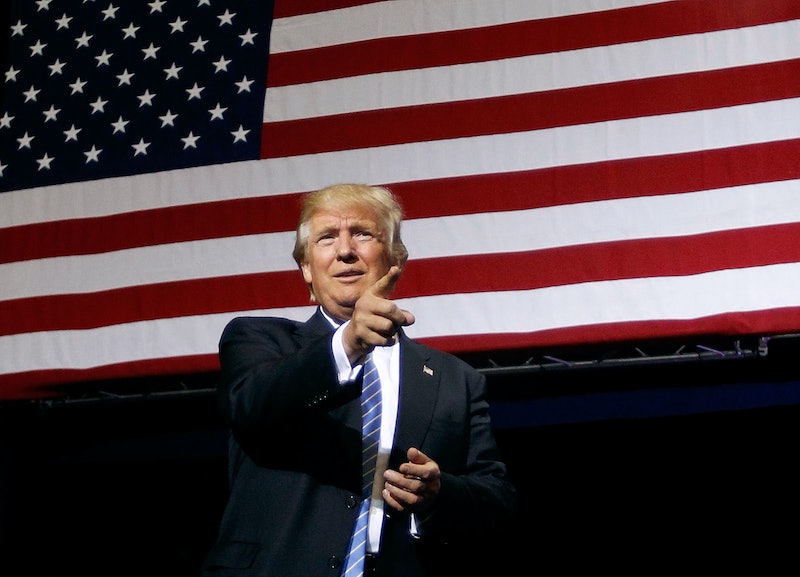 One of the more controversial figures of the 20th century was just honored by one of the most controversial of the 21st. Phyllis Schlafly died at the age of 92 on Sept. 5. She spent her final days of advocacy supporting none other than Donald Trump and his bid for the White House, even co-authoring the book The Conservative Case For Trump which came out Tuesday. So fittingly in a statement on Schlafly, Trump hearkened back to her first book, written during the 1964 presidential campaign.

It makes sense that Trump would honor Schlafly. She was one of the Trump campaign's earlier endorsers and one of the most prominent conservatives. In March she told a crowd in St. Louis that Trump was her candidate: "We've been following the losers for so long — now we've got a guy who's going to lead us to victory." But now it was Trump's turn to honor her. The comments were posted on his website:

Phyllis Schlafly is a conservative icon who led millions to action, reshaped the conservative movement, and fearlessly battled globalism and the 'kingmakers' on behalf of America's workers and families. I was honored to spend time with her during this campaign as she waged one more great battle for national sovereignty. I was able to speak with her by phone only a few weeks ago, and she sounded as resilient as ever. Our deepest prayers go out to her family and all her loved ones. She was a patriot, a champion for women, and a symbol of strength. She fought every day right to the end for America First. Her legacy will live on in the movement she led and the millions she inspired.

Much of what Trump said echoes his campaign slogans, but the use of "kingmakers" is a reference to her 1964 book A Choice Not an Echo. That was in many ways what really put Schlafly on the map. It was a pocket-size guide to why she supported Barry Goldwater, a conservative Arizona senator that opposed New Deal policies, for president. He lost the election so badly to Lyndon B. Johnson that many down-ticket Republicans lost, too. But Schlafly had a way with words in endorsing him: she sold 3 million copies.

In many ways, in her book Schlafly sounded like Trump does now when he suggests the election, and particularly the primary process, is unfair. She contended that "a few secret kingmakers based in New York selected every Republican presidential nominee from 1936 through 1960, and successfully forced their choice on a free country where there are more than 34 million Republican voters." From there she jumped into an anti-communist crusade and why past Republican candidates had failed. She then wholeheartedly endorsed Goldwater, noting that his support was "in response to a genuine grassroots movement."

Some of the things she said about Goldwater make you think of Trump, too:

He is the one Republican who will not pull his punches to please the kingmakers. He can be counted on to face the issues squarely. He will make the kind of forthright hard-hitting campaign that American voters admire. This is why he is the man the left-leaning liberals most fear. He is the only Republican who will truly offer the voters "a choice, not an echo."

Schlafly continued to work on conservative issues until the end, and somewhat poetically passed away on the eve of her next book, another election year endorsement of a candidate with arguably a "forthright hard-hitting campaign." The Conservative Case For Trump may be a fitting final hurrah for her final act of political advocacy.