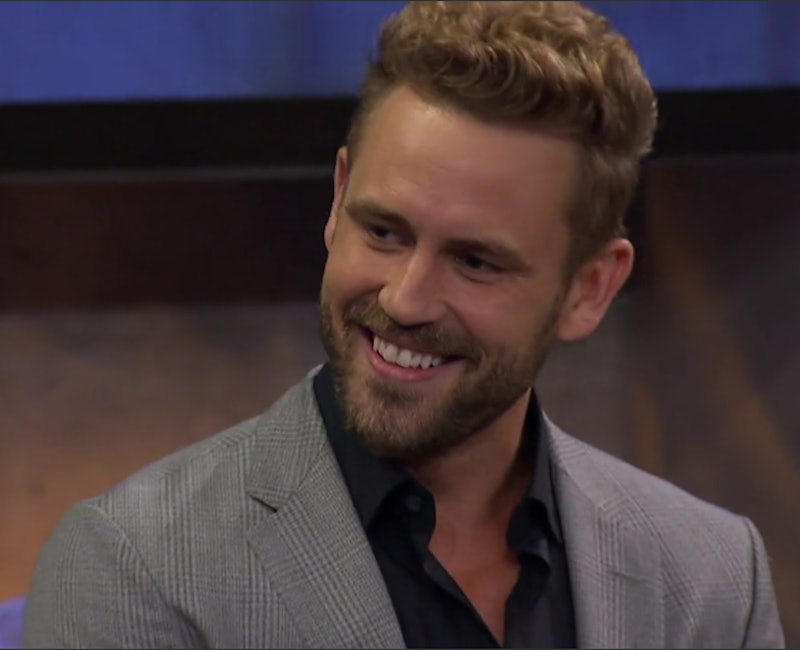 There are many reasons to love Nick Viall as the next Bachelor. His his funny narration, visible transformation, and charm all make him the perfect candidate. Nick is what the series needs at this point, a Bachelor who hopefully won't just deliver general Bachelor "lines," but will also comment on the process itself. Nick was announced as the next leading man on After Paradise last week. But, the odd thing is, he was announced before the season finale of Bachelor in Paradise. This was a major spoiler because in Paradise, Nick is currently dating the lovely Jen Saviano. So, why did ABC announce Nick as the Bachelor before BiP ended?

There are two main reasons for announcing Nick early. The first is that the shocking news being delivered unexpectedly created buzz in the Bachelor world. Both #thebachelor and #nickviall were trending post-announcement. The social media buzz and shock are utilized by the show. It is essentially easy publicity for the next season. The second reason for the early announcement is casting. The show's initial lead was looking like Luke Pell. Nick will be a very different Bachelor, and he needs a cast of ladies interested in him. Mike Fleiss, the show creator, tweeted this out in response to questions from fans.

There is a certain time rush when it comes to the Bachelor world. Ben Higgins began filming late September and airing in January. Nick is probably set for a similar timeline. There was a quick switch from Bachelor Luke to Nick. The change in the lead a few weeks before filming puts pressure to get the casting and publicity process started. The show only works if there are a gaggle of ladies interested in Nick night one. This can only happen if the right people are cast. In realty TV, casting is everything.

Despite these logical reasons for announcing Nick early, there is an awkwardness to it all. On Bachelor in Paradise fans are watching Nick and Jen fall for each other. There is definite humor in the will-they won't-they set up of the show, because, as we all know, Nick doesn't end up engaged to Jen as the show is teasing. When Nick was announced as the next Bachelor, he was met with a lot of support from past Bachelor contestants. That is, except for Jen, who humorously tweeted this:

At the end of the day, Nick is the next Bachelor. As silly as it is to now watch Nick and Jen in Paradise, the focus will soon shift to the upcoming Bachelor season. And, my fingers crossed that this Bachelor world veteran finally finds love. If he does, his marriage will definitely be televised. And the birth of his children. And his grandchildren. I mean, everything else has been — including his impending split from Jen on Tuesday night.