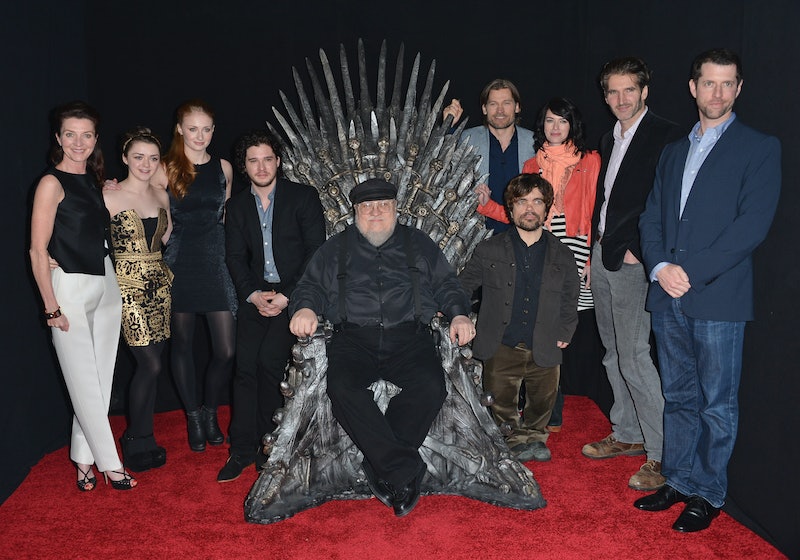 If you were concerned that the A Song of Ice and Fire books might never catch up to the series based on them, keep this in mind for comfort: The author of the books is scared they will, and soon. In a recent (and very generously long!) interview with Vanity Fair, George R. R. Martin spoke about the Game of Thrones series and his books, and moreover, how he's feeling the pressure to pump those books out because the show (which is rumored to last seven seasons) is quickly catching up to the ones already published. He is, however, come hell or high water (and winter and storm and ice and daggers and stuff) going to tell these stories and finish them.

Martin has actually met with the show's creators, D. B. Weiss and David Benioff to discuss how rapidly they're catching up with the show. "It's alarming," he said, in response to their speed. So naturally, the show's pace and popularity (APRIL 6! SEASON FOUR PREMIERE!) has his pressure to write rapidly (as opposed to his otherwise glacially slow pace). It gives him deadlines, and he dislikes deadlines a lot.

Well, it certainly increased the pressure. But there was a certain amount of pressure anyway. The minute you have a series [of books] and a book comes out, people immediately begin asking, “Where’s the next book?” And the more successful the series is, the more people ask that question, and the more pressure you begin to feel. The fact that the show is catching up to me has really doubled-down on that and made me feel the pressure a lot more. The truth is, some writers thrive on that. I don’t really. I don’t like deadlines. I’ve spent most of my career trying to avoid deadlines.

Fans of the show act as human deadlines (look no further than my APRIL 6! SEASON PREMIERE! enthusiasm), and, as his books are so long and take Martin ages to write, that's a real concern. Not to mention, the show needs to know where it's heading so that they can make the right moves. Martin said that they do know where it's heading, but worst case scenario, there are a variety of moves HBO could make to ensure that fans have something to feast on in the absence of a new book. He mentioned how Breaking Bad was split into two seasons (a viable option!), and how he's also thought of various options in the worst case scenario:

[...]There are various things. Spartacus went back and told a prequel season. That’s also an option. We have prequel. We have the Dunk and Egg novellas, which take place a hundred years before. And I’ve just published The Princess and the Queen, which takes place two hundred years before. So there’s lots of Westeros material out there, if we want to keep doing Westeros projects, but not necessarily that.

Still, he knows he's gotta rev up his writing speed. He said, "But, you know, I realize — I don't want too sound too glib about this. This is a serious concern." YES. YES IT IS.

There are real concerns beyond finishing the storyline; the actors are aging. Bran isn't supposed to grow into some Jon Snow-esque heartthrob. Martin expressed particular concern about Maisie Williams, the actress who plays Arya. He said, "Maisie [Williams] was the same age as Arya when it started, but now Maisie is a young woman and Arya is still eleven. Time is passing very slowly in the books and very fast in real life." Well, yes, because that's how time works.

Still, he's got a plan. Ready for it? Brace yo-selves.

The season that’s about to debut covers the second half of the third book. The third book was so long that it had to be split into two. But there are two more books beyond that, A Feast for Crows and A Dance with Dragons. A Dance with Dragons is itself a book that’s as big as A Storm of Swords. So there’s potentially three more seasons there, between Feast and Dance, if they split into two the way they did. Now, Feast and Dance take place simultaneously. So you can’t do Feast and then Dance the way I did. You can combine them and do it chronologically. And it’s my hope that they’ll do it that way and then, long before they catch up with me, I’ll have published The Winds of Winter, which’ll give me another couple years. It might be tight on the last book, A Dream of Spring, as they juggernaut forward.

"Tight" is an understatement for getting that last book out. But for now, let's just concern ourselves with April 6, and ordering our dragon eggs leggings in time for the premiere (which, by the way, you can purchase right over here).