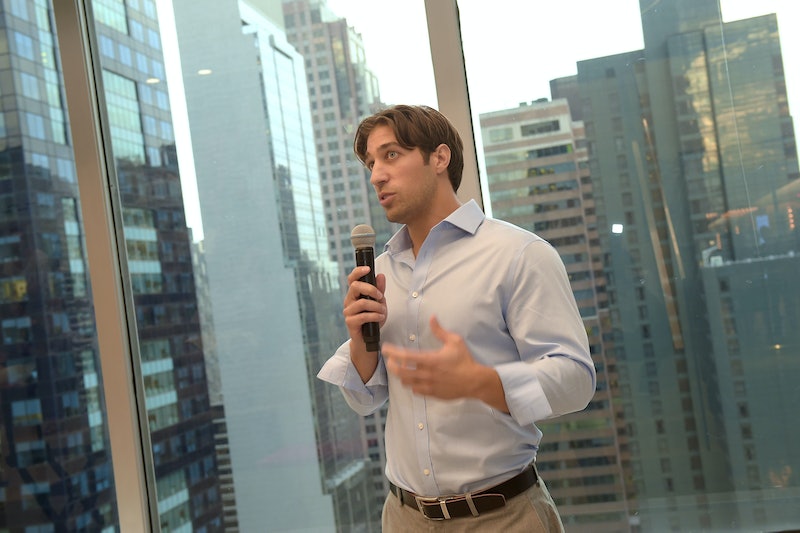 Unlocking The Truth host Ryan Ferguson is on a mission to explore criminal cases where convicts claim they're innocent. The MTV docuseries' list of subjects includes Byron Case, who's in jail for the murder of his friend Anastasia WitbolsFeugen in 1997, according to The Kansas City Star. According to his appeal court documents, Case and WitbolsFeugen had been out that evening with WitbolsFeugen's former partner Justin Bruton and Case's then-girlfriend Kelly Moffett. WitbolsFeugen got out of the car the four were riding in after an argument with Bruton and that was the last time she was seen before her death, according to Case and Moffett's initial interviews, per the court documents. The same documents reported that WitbolsFeugen was later found in a cemetery with a single, fatal gunshot wound to the face and that Bruton killed himself a day later. In 2002, Case was convicted of her death and ordered to serve two life sentences, according to The Kansas City Star. But, after his continued appeals and the spotlight from this MTV series, is Byron Case still in prison?

Yes, Case is still serving out his two life sentences without parole in a Missouri correctional facility, according to their website. This is where Unlocking The Truth comes in. Ferguson and his MTV team aren't the first parties to be interested in exploring Case's claims of innocence. FreeByronCase.com is a site created and maintained to gather support for Case's call for freedom.

Per Byron Case's appeal documents, Kelly Moffett came forward three years after WitbolsFeugen's death with a different story of events, this time claiming "that she had seen Case shoot and kill Anastasia at Lincoln Cemetery." According to a clip from Unlocking the Truth, police asked Moffett to then get a confession from Case, but he refused to engage on the topic of the murder. The clip reports that the court later considered his silence a "tacit admission" of guilt, and he was convicted of the crime.

In his 2012 book of essays, My Heart Is An Idiot , writer Davy Rothbart chronicled how he'd written several letters to Case and his mother, Evelyn Case, invited Rothbart to come with her to visit her son in prison. Rothbart wrote about meeting Case in part of the essay book.

"Thanks for coming so far to see me," Byron said, shaking my hand vigorously. He swept an arm through the air. "Hey, come on in, grab a seat. It's not much, but we call it home."

Rothbart wrote that he was "surprised by Byron's relaxed charisma, sweetness, curiosity, and nerdy wit." According to the author, Case shared verbal snapshots of his daily life, like the hours spent assisting his cellmate with crossword puzzles. "We're gonna keep working until Bryon is home," Rothbart quoted his mother as saying.

Will MTV's show push this cause forward? The Byron Case episode of Unlocking The Truth airs this Wednesday at 11 p.m. ET.