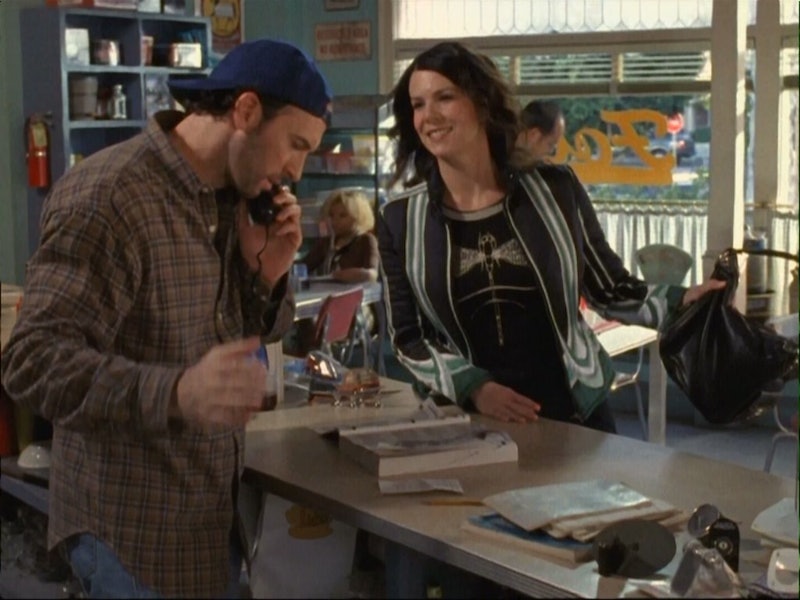 It just keeps getting better. As we await the Gilmore Girls revival, more and more information regarding our beloved characters continues to be revealed. The latest has to do with Luke, Lorelai, and one pretty serious looking phone call. In an image posted exclusively from TVLine, Lorelai and Luke receive some big news while sitting in a crowded Black-White-Read Bookstore/Theatre for a screening of some movie (hopefully Casablanca right?). In the image you can clearly see that Lorelai has either just received an important message or is on the phone with someone. And it's serious. Or surprising? Maybe both. Either way, Luke appears to be just as affected. Question is, what's the news? The photo doesn't even reveal who she's taking to, so it could be anything.

Out of all the Gilmore girls, Lorelai's trajectory in the revival remains the most unclear, which make the contents of this phone call that much more vague. We know that Lorelai and Luke are together at the beginning of the revival (though not married). but we don't know much about what's transpired in their relationship over the years. Like, did they have children? Did they name them March and May? Or at the very least did they adopt a second Paul Anka? A Paul Anka II? These things I cannot say, but let's not rule out the idea that this phone call has something to do with them and their life together, as Luke so clearly is pointing at himself in the released photo.

It looks as if he's saying "Who me?" to Lorelai. I can't think of anything that would be more surprising to them than maybe news of a pregnancy? Yeah I said it. I don't see why pregnancy couldn't be part of this duo's character arc. Lorelai will be in her late 40s, and, though a pregnancy at this time is more rare, it could happen. Hence, the surprised look on both of their faces?

Given the severity of worry on Lorelai's face though, I'm pretty convinced that the person on the other end of this phone call is either Rory or Emily — the two people in Lorelai's life (other than Luke) that could elicit such a reaction from her. Since we know that Rory and Emily aren't in the most stable of places when the arrival begins, this call could be troubling news.

Let's also not rule out the possibility that this phone call has something to do with the death of Lorelai's father, and Rory's grandfather, Richard. As we already know, the patriarch of the Gilmore family will be noticeably absent from the revival since the actor behind him (Edward Herrmann) passed away in 2014. How Gilmore Girls addresses Richard and Edward's passing has been open to debate, but there's no doubt that it will be a major influence on all of the Gilmores. And, sure, finding out that your father died while you're sitting in a crowded Black-White-Read Bookstore/Theatre for a screening of some movie (hopefully Casablanca right?) would be terrible, there's no good place to receive that news. At least here, Lorelai would be next to someone she loves, doing a thing she loves.

Until the series returns on November 25, all we can do is continue what we've been doing — wait.