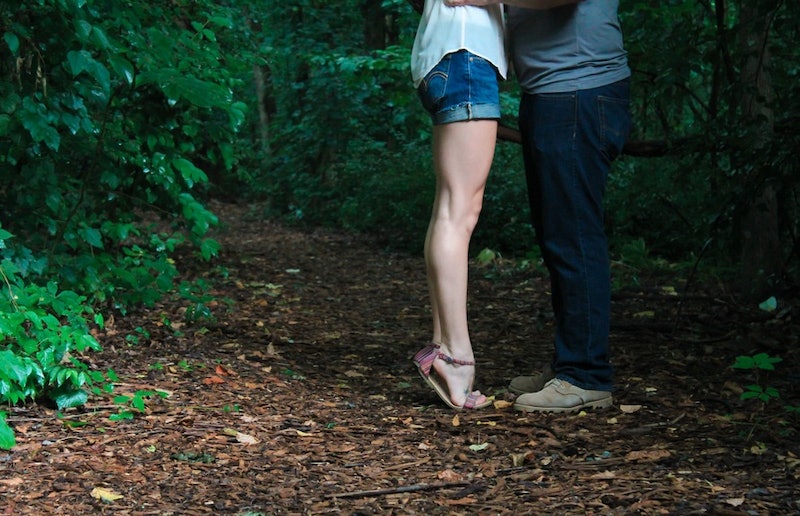 For some of us (read: me) awkwardness is life. So when I spoke to relationships experts about how awkwardness can bring couples closer, I was all, "Yaaas!" I've always said that if I could channel my awkwardness into something positive, I'd be a superhero. Like, totally unstoppable. You can be unstoppable, too though — at least, in a relationship sense.

If you're not a person who spends their life ears-deep in an ocean of awkward, some of these tips might make you uncomfortable. OK, they'll probably make anyone uncomfortable. But this is the good kind of uncomfortable. It's the kind that ultimately lets you know each other on a deeper level and that brings you closer together.

When you first start dating, it's nice to meet the best parts of each other, but that's not reality. Eventually, you'll need to ugly cry, get annoyed by each other, and maybe even argue, otherwise it's not real. Rather than fight to avoid the awkwardness, you can learn to see it as an opportunity. You can actually seek out awkward and uncomfortable moments to build a deeper level of intimacy. I always told my wife that if she could love me in the ER after I tripped on my dog and injured my vagina, then she could love my any time. And I was right. Here are some tips on how to embrace the awkwardness so you can take your love to that next level.

1. Miss A Flight Together

Have you ever traveled with someone you love? Good lord, this is the real test of love. Experts agree. "Miss a flight. It's always a bummer but it helps you learn about your partner's ability to handle conflict. Do you play the blame game or find a solution? If you're able to successfully come to a cool-headed solution together, you'll gain confidence that you will be a good team when bigger issues arise down the line," says professional matchmaker Allison Gerrtis in an interview. This theory also works with getting lost on road trips. Don't ask me how I know. I just do.

2. Spend Alone Time With Their Parents

Social anxiety alert. The idea of spending time alone with my partner's parents makes me so nervous. What if I say something wrong? But it can be a good way to get closer with your partner. "Take your partner’s mother or father to lunch, by yourself. Just the thought of it will probably invoke a reaction that ranges from general discomfort to a cold sweat," says relationship advice writer April Masini of Ask April. "Chances are, if you keep it light and warm, things will go very well, and you’ll have your own experience with your partner’s parent, which will make you and your partner closer." Just maybe don't bring up your sex life.

No relationship is perfect. When problems arise, a lot of people don't mention them, because they are awkward, or hard to talk about. They're worried about hurting their partner or making their partner mad. The bad news is, if you don't talk about these things, they'll turn into resentments that ultimately have a negative impact on the relationship. So if those problems are going to end up bad at some point anyway, it's better to talk about them when your relationship is still worth saving then to fight about them when things start to go wrong. Healthy relationships are built on healthy communication.

My partner is always asking, "Whatcha thinking about?" whenever I get that spaced out look. Normally I just say "my to-do list" or "something I wanted to write." Then one day I decided to tell her the truth: that I was having a fake conversation in my head between our dogs where they resolved their issues and decided they were going to be best friends. I included some of the best, most heart-felt dialogue. I thought for sure that it was going to be super awkward, but she just said, "I love you, you giant weirdo," which is so cute and sweet. Bottom line: be with someone you can be yourself with, then be yourself. It will make you closer.

Awkward sex is a great way to grow closer. You laugh when the condom flies across the room. You attempt to scissor (even though, in my experience, that's really not a thing lesbians do) just for fun. You make weird sounds, try weird positions, and say weird things. Sometimes the things you try during awkward sex work, sometimes they don't. Ultimately, you end up closer, and less afraid to try new things. It's an awkward win win.

6. Stare Into Each Other's Eyes

Do you like to be stared at? Or does it make you fidgety and uncomfortable? Well it might just be the awkward thing to do to create closeness and intimacy, says Dr. Michele Kerulis, professor of counseling at Northwestern. Kerulis recommends you “gaze into each other’s eyes for 90 seconds. This sounds easy but it can be quite challenging. See if you can do this without giggling or breaking eye contact. Now this isn’t a staring contest – it’s an exercise to focus on your partner and give 100 percent of your attention. Gazing is looking with affection into the other’s eyes and really being present." I'd probably last five seconds! Awkward!

7. Introduce Them To Your Weird Uncle

Or maybe your whole family is full of weirdos (lucky!). If your partner knows every corner of your life, including the weird parts of your family, it will strengthen your bond, according to Johnson. "We all have that one crazy relative that makes family get togethers dreadful. If your significant other can sit through Thanksgiving dinner while your Grandpa determinedly lists the reasons Trump should be the next President, they are a keeper," says Johnson. Warning, your partner could run away screaming, but if that happens, they weren't for you anyway.

8. Don't Hold In Your Farts

My grandmother told me once that after decades of being married to my grandfather, and having 12 of his children, she still had not farted in front of him, because it wasn't good manners. Wow. There's a time and a place for gas, sure, but sometimes, especially when you live together, you have to let it out. Breaking that fart barrier is a sure sign that you're comfortable together and secure in your relationship. "If the smell doesn't knock 'em out, then it looks like you've reached a new level of comfort," says Johnson.

9. Go On An Adventure

When you step outside of your comfort zone and do things your partner likes (and they do the same in return for you) it can take you to a whole new level of awkward bliss. For example, me, the queen of clumsy, putting down my nail polish and my phone to hike in the wilderness, was a hot mess of awkward and hard and fun. We supported each other and were patient with each other, and we were closer at the end of it. And after a long shower, we bonded again over talks and memories of the experience. The key is going into it with a positive mindset.

Working out in front of people is awkward to begin with. When it's your partner, especially in the beginning of a new relationship, it can feel so uncomfortable. There's sweating. There's grunting. There's bouncing. Sometimes there's worry if you're using the equipment right. It's tough. But if you and your partner can make it through that first awkward workout together, you will have reached a new level of love and acceptance.

I hope you'll learn to embrace the awkward as something good, because it has the power to take your relationship to the next level.