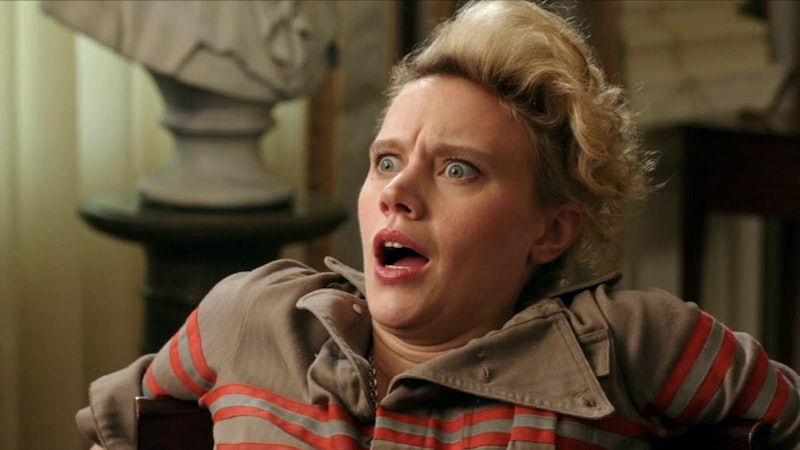 Summer is typically the season for big budget blockbusters, but for some reason, this year's crop was in many ways underwhelming. New action tentpoles like Suicide Squad and The Legend of Tarzan, along with returning franchise entries like Jason Bourne and Independence Day: Resurgence, were all blasted by critics, but one exception of the season was the Ghostbusters reboot. Ghostbusters ended up being perhaps the most fun and entertaining time one could have at the movies this summer, and fans are desperate to watch it again ASAP. So when will Ghostbusters be on Netflix?

Unfortunately, Netflix isn't in the habit of announcing their new arrivals very far in advance. Also, Ghostbusters is still playing in theaters. Now in its eighth week of release, the film isn't ready to give up its screens just yet. It came in at number 21 at the box office over Labor Day weekend, according to Boxofficemojo.com, adding another million dollars to its total haul. The film does, however, has its release date set for home video purchases on sites like Amazon and iTunes. Amazon states that the film will be made available on October 11, while iTunes estimates it hitting shelves two weeks earlier on September 27. That's all well and good if you want to buy or rent the movie, but how about if you're still holding out for Netflix?

In that case, you'll likely be waiting a while. Netflix generally doesn't get new releases until about a year after they're released in theaters, except in rare cases, so that would make next summer the earliest point that Ghostbusters could hit the streaming service. However, there is evidence that Ghostbusters will take even longer than that. The movies that Netflix scoops up the rights to very quickly generally belong to studios with whom the company has major distribution deals. For instance, their massive deal with Disney is the reason why Zootopia is hitting Netflix this month after just arriving on video in June. Ghostbusters, by contrast, is produced by Sony Pictures.

Now you may look at Netflix's current library and see Sony new release Hotel Transylvania 2 and be filled with hope for Ghostbusters. And while it's true that Netflix does have a deal with Sony animation , the first window streaming rights to Sony's live action releases belong to cable network Starz, according to Georg Szalai of The Hollywood Reporter.

Even though it looks like Ghostbusters probably won't be on Netflix for a long time, if ever, you still have some options to see it. You can wait until the fall for its home release and buy it. You can wait until next year and watch it on Starz if you're a subscriber. Or, since it's still in some theaters, you can go to the cinema and watch it right now! That sounds good, actually. You should do that.

More like this
Sadly, You Can’t Stream 'Doctor Strange In The Multiverse Of Madness'... Yet
By Morgan Leigh Davies
9 Honestly Unbelievable Revelations From The WAGatha Christie Trial
By Frances Stewart
10 Eurovision Moments That Celebrate The Weird & Wonderful Camp Extravaganza
By Sam Ramsden
What Does Doctor Strange’s Third Eye Mean?
By Arya Roshanian
Get Even More From Bustle — Sign Up For The Newsletter