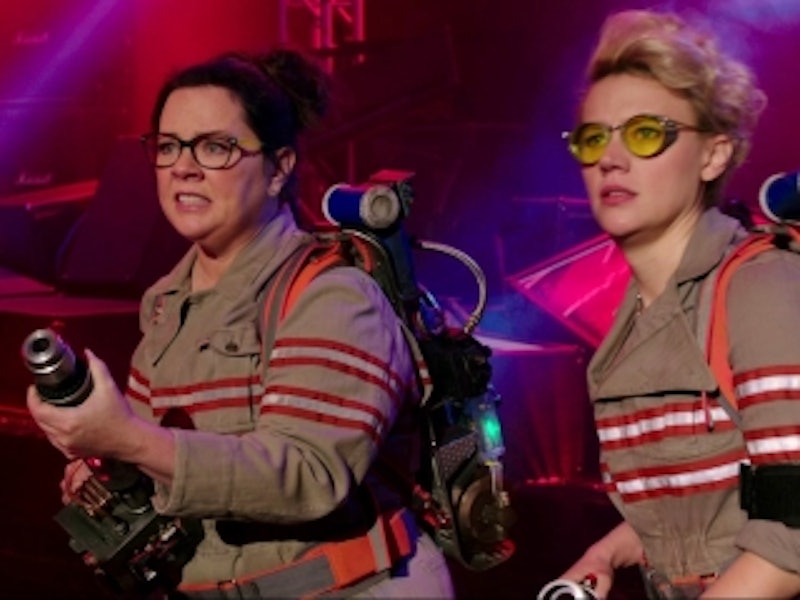 It's hard to think of a movie that drew more hate before anyone had even seen it than the new Ghostbusters. The film was heavily criticized for a number of reasons, but at the forefront of the hatred was an ugly backlash against the decision to cast four women as the Ghostbusters. A lot of guys, especially online, seemed unable to accept that the supernatural comedy franchise would now be led by women instead of men, and there were cries that this decision would somehow retroactively ruin their collective childhoods. Well, I'm a man who has seen the movie, and I'm happy to report that Ghostbusters didn't ruin my childhood. Not even a little bit.

I grew up watching the original Ghostbusters constantly, and it's easily my favorite movie franchise. So if anyone's childhood were at risk of being ruined by a new Ghostbusters movie, it would have been mine. Thankfully though, that didn't happen — instead, I discovered that the new movie is (gasp!) simply a totally fun way to spend a couple hours at the summer multiplex. It's a solid modern action-comedy blockbuster that feels in many ways like a Marvel movie. And who doesn't love Marvel movies, especially ones featuring kickass women? So take a look at all the many reasons why the new Ghostbusters actually didn't end up ruining my childhood.

Might as well get this out of the way. In no way does the new Ghostbusters erase the original from my memory, or from existence. I can still watch it whenever I want, and I can still have the nostalgia of my childhood wash over me when I do.

3. The Original Cast Supports It

It would be one thing if the people involved in the original all opposed this movie, but that's not the case. The bulk of the living cast cameos in the film, and Ivan Reitman and Dan Aykroyd are listed as executive producers. So if it's good enough for them, then it's good enough for me. Plus, the movie is dedicated to the late, great Harold Ramis, which shows that the film has a lot of respect for the original.

4. The New Cast Is Fantastic

The movie stars a murderers' row of comedic talent that might just be the best collection of comic minds in one film since the last Ghostbusters movie. Kristen Wiig, Melissa McCarthy, Leslie Jones, and Kate McKinnon are all at the top of their game here, and, despite what some of the movie's sexist haters might have expected, the fact that they're women didn't factor into how I perceived them as comedic leads or as action heroes. Everything about having them star in the film felt completely normal and natural to me. For once and for all: gender doesn't matter at all when it comes to leading a summer blockbuster.

5. My Childhood Has Survived Worse

I grew up on '80s movies. Along with Ghostbusters, another franchise that I watched non-stop as a youth was National Lampoon's Vacation. That series was also rebooted recently with Chris Hemsworth playing "against type," and guess what? It was terrible. The new Ghostbusters is way better.

If the new Ghostbusters came out when I was a kid, I would have dug it. I didn't love Ghostbusters as a child for the humor — that I came to appreciate as I got older — but for the ghosts. The new movie has awesome ghosts, like the murderous heiress, the dragon ghost, and the pilgrim. I would have owned all of their action figures.

7. It's Made The Original Relevant Again

Before the reboot came along, nobody was talking about Ghostbusters, which came out 32 years ago. Now everybody's talking about it, which means, well, I get to talk about it, something I'm all for. Also, there's the added bonus that the new movie results in Dan Aykroyd acting in movies again, which for me, is icing on the cake.

8. Its Callbacks Make Me Happy

The new movie makes a lot of references to the original film, and all of them give me a warm, fuzzy feeling. If a movie can make me feel like a kid again, even if it's by blatantly referencing something from my childhood, then I'm happy.

9. Ghostbusters Has Long Been Bigger Than Just The Original Movie

The Real Ghostbusters was an animated series that ran from 1986 until 1991, and it was awesome. I loved that show, and all of the Ghostbusters toys I owned in the '80s and '90s (and I owned a lot) came from it — not from the movies. In fact, the show actually shares very little in common with the films. The characters, even though they share the same names, look nothing like their film counterparts, and the style is far more kid-friendly. Ghostbusters has always had franchise potential (there was a second animated series in 1997 called Extreme Ghostbusters that I was unaware of until recently), and seeing it expand again is keeping with the Ghostbusters tradition I grew up with.

The humor of the new movie is very different from the original, and the truth is that nobody makes comedies like they did in the '80s anymore. But the new Ghostbusters still made me laugh, which is more than I can say about a lot of modern comedies.

11. I Understand Hollywood Is Just A Business

I understand the emotional attachment people feel toward films — I'm often guilty of it myself. But even if you feel like you own a personal stake in a certain film, you don't. There are no sacred cows. Money is what drives anything, which is why many of my favorite childhood films, like Gremlins, The Dark Crystal, Big Trouble in Little China, and the Indiana Jones series, all have sequels or reboots in the works. I hope these new films will be good, but I know there's a chance they won't be. But once in awhile, if you're lucky, you'll be surprised by something like Ghostbusters and find yourself truly enjoying a reboot of something you loved as a kid.

My childhood remains unchanged after viewing the new Ghostbusters, and I also got to enjoy a fun summer movie. Sorry, haters, but I call that a win-win.