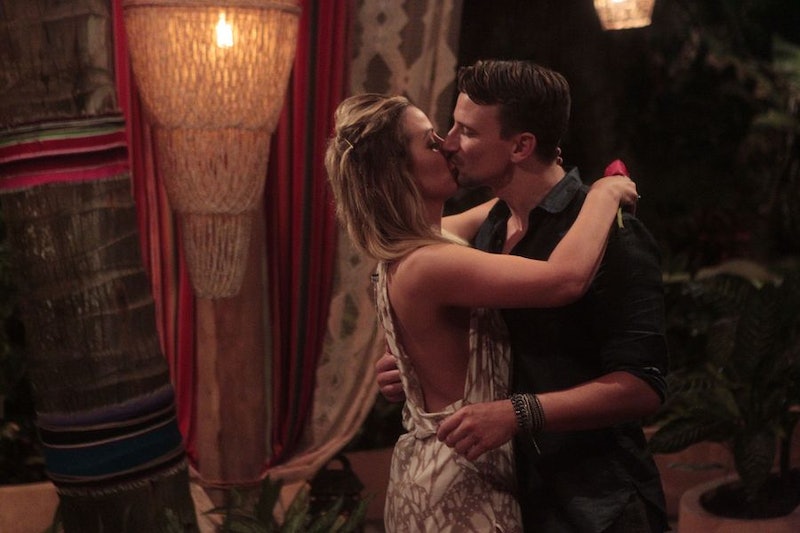 Bachelor In Paradise is like Thunderdome — all of these people walk in, but at the end, only a few walk out (together, hopefully). Everyone from creator Mike Fleiss to Chris Harrison has been bragging that more than one couple ends up engaged at the end of the show. But how many of those couples are still couples? Amanda Stanton and Josh Murray have been photographed everywhere together post-show, and Lace Morris and Grant Kemp hopefully are, since they got matching tattoos and it would be embarrassing if they weren’t. But what about the third couple? Are Carly and Evan still engaged after Bachelor In Paradise ?

If you want to talk about a strange courtship, a video of Evan and Carly’s road to love would be next to its dictionary definition. Evan liked Carly from the beginning, but Carly literally threw up when she had to kiss him for more than 90 seconds on a date. Literally puked. Evan wasn’t dissuaded from trying to win her heart, though. He was persistent, and he slowly won her over. The pair was in love enough at the end of Bachelor In Paradise to want to keep things going once they got back to the real world.

Carly and Evan haven’t been photographed post-show like the other couples have, but I think they’re together and engaged. In an interview with Glamour, Carly said that she was “super in love” with Evan and that she actually had Kirk, who dumped her on Bachelor In Paradise 2, to thank for it all:

Evan and I are completely on the same page feelings-wise, and Kirk and I never were. I think that’s why this is actually going to work. Evan was going for me since day one, and it took me a long time to catch up. I think when I finally did, magic happened. I don’t know, last year I feel like it just wasn’t right. I think what’s so cool…I have to keep thanking Kirk because if he hadn’t [broken up with me], I wouldn’t be here, I wouldn’t have met Evan, and I wouldn’t be in love. It’s crazy. I had no idea this would happen to me at all. At all.

Carly also talks about how excited she was to meet Evan’s three children and to be a stepmom, as well as the fact that she and Evan have talked about having their own kids. Evan seems like a levelheaded, responsible guy, which leads me to believe that Evan and Carly are still engaged. They’re definitely together, but Evan doesn’t seem the type to introduce his children to a woman he’s not very, very serious about. Evan has denied involvement with Carly, but that could just have been his attempt to keep things mum so at least one of the couples wasn't spoiled by the end of the show.

The bottom line? Carly has probably met Evan’s kids, they live “seven minutes away from each other” (Carly’s words) in Nashville, and they’ve talked about making their own babies. Yeah, I’m going to venture to say that Carly and Evan are still engaged and planning a very long happily ever after post-Paradise.