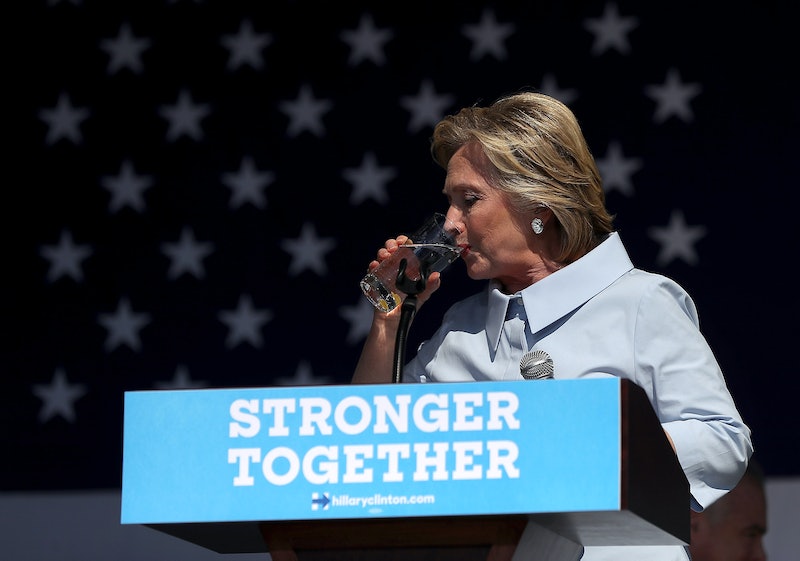 There's a theory in certain conservative conspiracy circles that Hillary Clinton is not as healthy as she seems. When Clinton appears tired, or stutters, or uses a banister to climb stairs, some health truthers are quick to declare that her actions are evidence of some concealed illness. It shouldn't be terribly surprising, then, that when Clinton had a brief coughing spell during a campaign stop in Cleveland, Ohio, health truthers swarmed Twitter, and #HackingHillary was trending in minutes.

I've read up on these claims that Clinton is secretly ill before, and I was not convinced of their validity — to put it mildly. Neither, apparently, are some other right-wing circles, who are instead convinced that Clinton's brief coughing jag must have been faked, a dodge to avoid answering questions.

Of course, Clinton has been accused of faking health issues before this coughing bout. When Clinton suffered a concussion shortly after the attack on the U.S. consulate in Benghazi, Libya in 2012, which resulted in the death of four Americans, she delayed testifying before Congress about it. In December 2012, the New York Post accused Clinton of unfairly avoiding facing Congress in an editorial titled "Hillary Clinton's Head Fake," stating:

Since then, the injury has been fodder for accusations — both claims that Clinton fakes health injuries to evade tough situations, as well as allegations she is secretly unwell, to the point she's unfit to be president. Is Clinton "faking sick?" Is Clinton "faking health?" Her critics cannot seem to make up their minds. They also don't seem to care that her physician, Dr. Lisa Bardack, has stated in writing that Clinton is "healthy" but suffers from fairly minor conditions, "hypothyroidism and seasonal pollen allergies."

Depending on whose tweets you read, Clinton is either "faking the cough" to avoid answering questions...

...Or else she's "pretending to be healthy" to cover up some ominous illness:

To some Clinton critics, she's somehow both "sick" and "faking sick":

Theories abound. But why? When other politicians cough, especially in inopportune moments, people may notice, but the coughs don't inspire such dramatic and outlandish conspiracies. It makes sense that someone who gives several speeches to large crowds every day would experience occasional hoarseness and coughing as a result. President Obama made headlines for coughing and requesting a glass of water during a discussion of the water crisis in Flint, Michigan. Even Trump supporter Ben Carson famously battled a cough during one of the Republican presidential debates last March.

If the best evidence either health truthers or feigned illness truthers can marshal is the fact that Clinton sometimes coughs, consider me unconvinced.

More like this
Michigan’s Governor Is “Going To Fight Like Hell” To Protect Abortion Access
By Andrea Zelinski
How To Fight For Reproductive Rights, Based On How Much Time You Have
By Courtney Young
LGBT+ Men Fleeing Afghanistan Were Denied Asylum By The Home Office, New Findings Show
By Sam Ramsden
Here's Your Daily Horoscope For May 18, 2022
By Mecca Woods
Get Even More From Bustle — Sign Up For The Newsletter