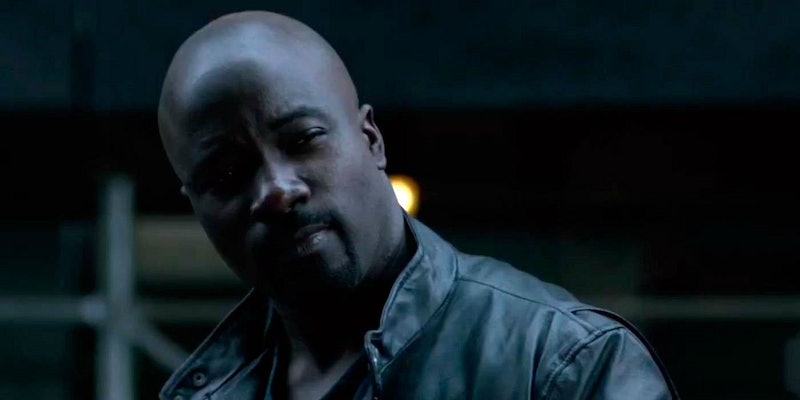 "Twenty-four days." That's what Cheo Hodari Coker's latest behind the scenes photo from Luke Cage says. Well that, and "You ain't ready." If you don't know, Coker's the executive producer and show runner behind Luke Cage , meaning that he's the authority here. So, when he says we're not ready, we should consider the possibility — and probably thank him for posting the photo on his Twitter. Not only does it send chills of excitement down my spine just to see Mike Colter on set, this particular behind the scenes image happens to be full of clues. Which is just how I like my behind the scenes images.

The newest addition to the Marvel/Netflix canon already made his debut back in Jessica Jones Season 1, but we barely scratched the surface with his character. This time, the solo series will explore everything that makes Luke Cage, Luke Cake. That means an exploration of Luke Cage in his home city, Harlem. We don't know much about plot details, other than what's been revealed in the trailers. (Which, let's be honest, are mostly composed of Luke Cage tearing down and any all bad guys in his path.) It helps that, thanks to some scientific experiment gone awry, he's bullet-proof and insanely strong. Like, can break doors off of buildings without breaking a sweat strong. Check out the image below.

See. Clues. Full of 'em. Clearly, Luke's on some residential street in Harlem, but, if you take a closer look in the background, it doesn't appear that he's just hanging out for fun. In the back, you'll notice some presumably broken and shattered windows, covered up with brown paper and duct tape. Perhaps this is an allusion to how rundown the city has become. Or, better yet, perhaps this image was snapped right after Colter filmed an action scene with Luke breaking those windows and taking names. Again, judging by the teaser trailers and what we know of Luke's strength, the latter seems more likely.

But why, then, is he standing in front of a barber shop? Well, this little barber shop plays a more integral role in Luke's backstory than you'd think. You might have missed it in the trailers, but Luke Cage isn't the bartender we came to know and love on Jessica Jones. He works at Pop's barber shop. It's not been confirmed whether or not "Pop" is just a parental figure or Luke Cage's actual father, but either way, he — and his shop — appear important to Luke.

Since parental figures often have short lifespans in comic book history, I think we can assume that something terrible happens to Pop early on. In fact, we see an image of the shop being sieged with bullets in the trailer released by Netflix in August. I'm going to go out on a limb here and say that Pops probably doesn't make it, and the "justice" Luke Cage seeks has a lot to do with that. Hell hath no fury like a Luke Cage scorned. I don't know, maybe Coker's right. I'm not ready for this.

Kidding. Of course I am. Twenty four days, he said?

More like this
20 Photos From The 'Stranger Things' Season 4 Premiere To Make You Feel Old
By Alyssa Lapid
The 'Hocus Pocus' Sequel Finally Has A Release Date & It Makes Total Sense
By Shannon Barbour and Radhika Menon
What Does Doctor Strange’s Third Eye Mean?
By Arya Roshanian
Elizabeth Olsen's Chris Evans Friendship Update Was Accidentally Hilarious
By Grace Wehniainen
Get Even More From Bustle — Sign Up For The Newsletter