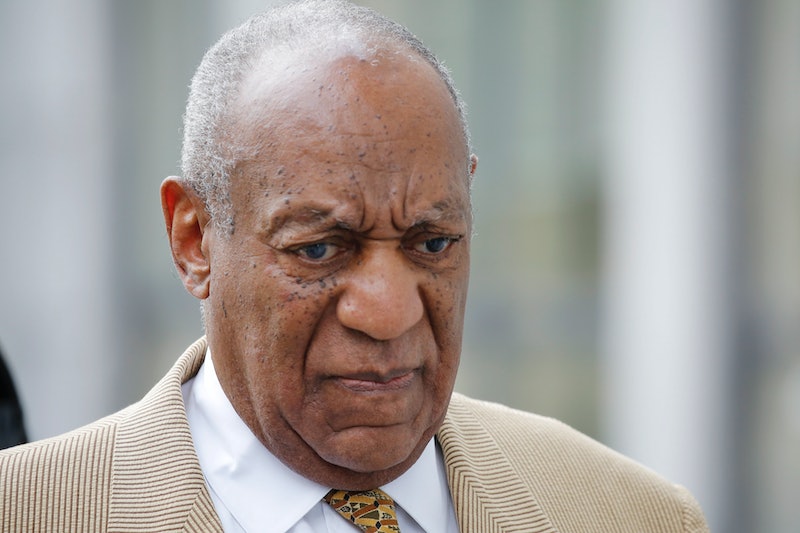 Bill Cosby appeared in court for the first time on Sept. 6 in advance of his upcoming criminal sexual assault trial in Pennsylvania. The first photo of Cosby from his pretrial hearing shows the somber start of this controversial case, as the once-beloved, now-reviled comedian and alleged serial rapist entered the courtroom.

By any measure, the upcoming Cosby trial will be one of the biggest, most-followed legal battles in recent memory, owing to the towering public stature of the defendant, the heinousness of the crime with which he's been charged — he's only being tried for one of the dozens of allegations against him, this one from former Temple University employee Andrea Constand — and the shock sent through the national consciousness as the accusations gained more public viability over the past couple of years.

Cosby was required to appear at the pretrial hearing, which means the American public got its first glimpse of the 79-year-old in the midst of the criminal proceedings. Cosby has pleaded not guilty, and his defense team is expected to ask Judge Steven O'Neill to throw out key pieces of evidence, including a 2005 deposition and a phone call recorded by Constand's mother Gianna. Here's how Cosby looked as he entered the courtroom, facing criminal charges that could ultimately land him in prison:

In his 2005 deposition, Cosby admitted that he'd provided drugs (specifically Quaaludes) to women whom he wanted to have sex with. However, Cosby did not admit to drugging any women against their will. As CNN detailed when the news first broke, his attorney objected to that question, and instructed Cosby not to answer.

The stakes are high in this pretrial hearing, both for Constand, Cosby, and the more than 60 other women who've made sexual assault and rape allegations against him. However accomplished and successful his attorneys might be, as Jessica Testa and Tasneem Nashrulla detailed for BuzzFeed, the pretrial hearing could pave the way for some of Cosby's other accusers to testify. Many of whom have stories that track tightly with Constand's, establishing what could easily be viewed as a pattern of behavior. Amid all that, it'd seem truly tough for Cosby to escape the trial without some form of legal repercussion.

For the time being, you'll simply have to wait and see how the pretrial hearing plays out. And if you've followed the Cosby allegations closely, and plan to do the same with his criminal trial, you should definitely pay attention. Some cases are won and lost on the strength of what evidence is allowed and what's forbidden, after all. And with the freedom of a man of Cosby's wealth and stature on the line, you can be sure his defense lawyers are going to do anything they can to try to shield him from a conviction.