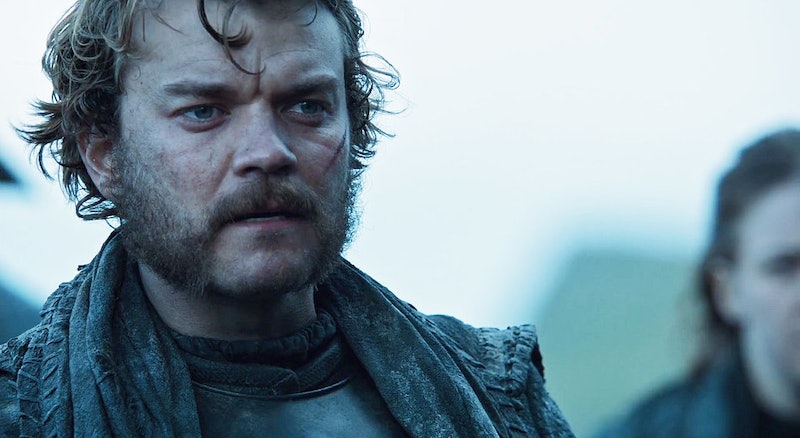 Now that all the major bad guys are done for on Game of Thrones (Ramsay Bolton, the High Sparrow, the Masters, etc) — and all that's left is the grey-area kind of villains (Cersei, Melisandre, and so on) it seems like Westeros will need a new villain to shake things up and be the character we can all really hate. In a new theory brought up by YouTuber and Game of Thrones expert Alt Shift X, signs point to Euron Greyjoy as the newest Big Bad. Of course, the real ultimate evil on the show are the White Walkers, but that's not going to stop the silly humans from assuming their battles for the crown are more important and causing major mayhem. Game of Thrones always thrives when there's a super evil character who does really dark, twisted things, and I don't think Season 7 will be any different, if Euron truly becomes a major villain.

For those of you who need a refresher, because let's face it, there are a lot of dudes with difficult names to remember in GoT, Euron is the pirate uncle of Theon and Yara. He killed their father on one fine Iron Islands day, when Balon was enjoying some time on a rope bridge. In Season 6, Euron convinced everybody at the kingsmoot that he was their guy and ready to be king of the Iron Islands. He also came up with some crazy plan to ally with Daenerys via marriage (dream on, dude). All of these things (and more) make it seem like Euron is about to show GoT fans that Ramsay's got nothing on him, and here are all the ways he's being set up to be the show's biggest villain.

The theory by Alt Shift X theorizes that Euron has and will continue to use the assistance of Jaqen H’ghar and the Faceless Men as a means of making it to the top. The theory states that Euron hired the servants of the Many Faced God to kill Balon and will continue to make some sort of "great sacrifice" that jeopardizes the whole world to bring about the "Death" thing the Faceless Men are so into. Cool, Euron.

2. He Loves To Abuse

In a Song of Ice and Fire chapter called "The Forsaken" released by George R.R. Martin via Vulture, fans learned that Euron is a cold, hard psychopath. He keeps his brother, Aeron Greyjoy, in a jail and tortures him often. He also pleasantly reminds Aeron of past abuse saying, " I could hear you praying from outside the door. I always wondered: Were you praying that I would choose you or that I would pass you by?" Basically, he's just like Ramsay.

We know from the television series that Euron killed his brother, Balon — but that's not the only family member he's murdered. In the released chapter, Greyjoy brags about murdering several of his siblings.

4. He's Got Some Dark Magic Plans

In "Forsaken," Aeron has a drug-addled vision (because you know, his brother, Euron is drugging him) in which "the Great Shepherd and the Black Goat, three-headed Trios and the Pale Child Bakkalon, the Lord of Light and the butterfly god of Naath. And there, swollen and green, half­-devoured by crabs, the Drowned God festered with the rest, seawater still dripping from his hair." Aeron also says that his brother has been using the blood of priests, sorcerers, and pregnant woman as a sacrifice to the gods so he can win a battle at sea. Dark magic, ahoy.

5. He Has Valyrian Steel Armor

According to Euron's bragging in "The Forsaken," he lifted Valyrian steel from an abandoned estate, and actually ends up wearing it. The "whorls and glyphs and arcane symbols folded into the steel" are what scare me the most because who knows what he could do with those if he's dabbling in dark magic.

6. He Cut Out The Tongues Of All His Crew Members

In the Song of Ice and Fire series, it is revealed that Euron found himself a dragon's horn during his Valyria scavenging. This horn, decked out in Valyrian Steel and some creepy glyphs, can hypothetically be used to take control of any dragons that hear its sound. Oh, and when Euron's pal, Cragorn blows the horn at the kingsmoot to get everyone to chill out, he dies immediately and his lungs are charred. What a great tool for such an insane person to have.

8. His Ship Is Black To Hide Blood Stains

The books describe his pirate ship, the Silence, as being black with a dark red hull and red deck to better hide the blood. What is with this guy?

9. He Threw A Dragon's Egg In The Ocean

In A Feast for Crows, Euron brags to his brother Victarion that he had a dragon egg but, "threw it in the sea during one of my dark moods.” While he might just be lying and still have possession of the egg (which is actually even scarier), someone who takes dragon eggs that lightly really has no common sense. A guy with his lack of self control doesn't deserve a dragon egg.

10. He Does Not Treat Women With Respect

In A Feast for Crews, we learn that Euron most likely raped his brother, Victarion's salt wife. He said to Victarion (but was likely lying), "She came to me wet and willing... it seems that Victarion is big everywhere but where it matters." His misogynistic and messed up views will likely come out if he faces all of GoT's badass ladies in Season 7.

11. The Red Priests See Bad Things For Him

Melisandre arguably hasn't really used her reading-the-flame powers well — she was totally wrong about Stannis, for example. But in A Dance with Dragons, one Red Priest has a vision that screams of death and destruction by way of Euron. The priest Moqorro, who is one of Daenerys' advisors for a minute in the series, tells Tyrion he has only seen shadows people searching for Dany. "Only their shadows. One most of all. A tall and twisted thing with one black eye and ten long arms, sailing on a sea of blood." In the series, Euron has one black eye and one blue. Sounds familiar, right?

Euron definitely has what it takes to be a Big Bad. He's got the sociopath vibes, the magical tools, and the passion to definitely cause an uproar in The Seven Kingdoms. I don't look forward to what this creature does, but I'm still excited to see it go down. Bring it on, Season 7.