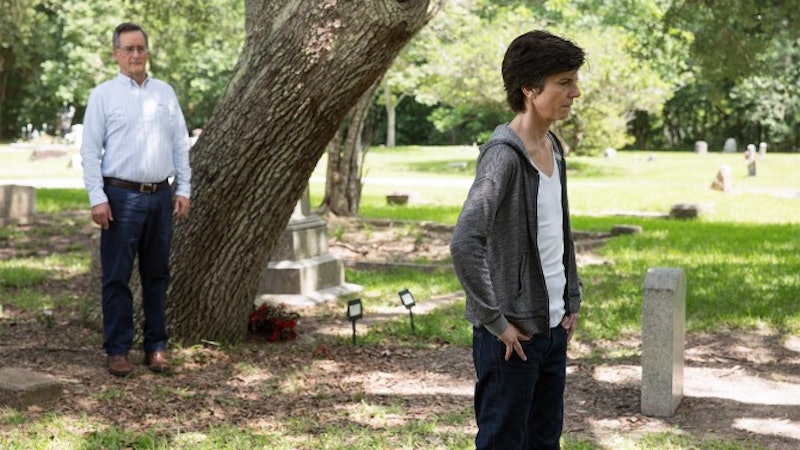 Back in 2012, stand-up comedian Tig Notaro performed a set at Largo in Los Angeles that soon became legendary. "Hello, I have cancer," Notaro began, to nervous laughter from her audience. At what was probably the darkest moment of her life, the comic invited the world into her pain; it was likely also the sharpest, as it related to her cancer diagnosis and the recent death of her mother. More than raw, cathartic, and ultimately healing, Notaro's set was funny . Hilarious, even. Along with Juno screenwriter Diablo Cody, Notaro has developed her story into One Mississippi , a comedy series premiering Sept. 9 on Amazon. And if spinning laughter out of the loss of a parent seems unusual, that's because few small-screen comedies have dared to try it.

Don't get me wrong, One Mississippi's brand of comedy is dark. The pilot begins with Tig — her character is a radio host rather than a comic — telling a story on-air about her childhood obsession with stuffed animals and her mother saving those furry friends from her stepfather's de-cluttering spree. Later, Tig boards a plane to New Orleans alone to sit at that dying mother's bedside — but not before the side effects from her chemotherapy treatments force Tig to visit every restroom between security and the gate. ("The runs?" her brother asks. "Sure, if you want to...dress it up.")

The bits are few. One Mississippi finds laughter in the ridiculousness of death and loss. Death is a part of American culture, in that it happens on TV and in the movies and is otherwise spoken of in hushed tones. When you attend a wake, you know from learned behavior what you should say and how you should look when you say it. Tig challenges the polite responses to her mother's death; not in an aggressive way but in a baffled one. "Big day tomorrow," her girlfriend, Brooke (Casey Wilson), says the night before the funeral. "Tomorrow's actually a very small day, because my mother's not in it," Tig replies. "Every day from now on will be smaller. The town's smaller. I'm smaller." Later, in her eulogy, Tig tells her fellow mourners that she'd tried and tried to picture the moment of burying her mother, but that all her conjectures were wrong.

When I think of TV portraying an adult character losing a parent, I can come up with a pretty decent list of dramas. Six Feet Under practically wrote the book on the subject; the whole series is catalyzed by the death of the Fisher patriarch, and grief is a major theme throughout. But the topic is rare in comedy. It's strange if you think about it; this is a fact of life that almost every adult endures at some point, including TV writers. Yet it remains under explored.

Death came to Modern Family in Season 4 when Phil's mother passed away. The show dealt with the funeral with its typical shenanigans-followed-by-heartfelt-revelations formula, though there were moments of genuine emotion. Another example took place out of necessity. After star John Ritter passed away, the family sitcom 8 Simple Rules paid tribute through an episode that included the off-screen death of his character, a father of three. The show was gone a season and a half later.

One Mississippi is in uncharted comedic territory; death isn't a "very special episode," it's a lingering reality. This series is a continuation of its star's efforts to make sense of the loss of her own mother. Perhaps parents don't regularly die in TV comedy because writers find it difficult to integrate something so profound and loaded into an existing world with its own sense of humor. But One Mississippi comes from a person who is living in that grief, creatively and personally. And it's filling a space in TV comedy that speaks to so many adults who've buried a parent and found their cultural roadmap lacking.

More like this
'The Ex-Wife’s First Look Pics Are Giving 'Gone Girl' Vibes
By Bustle UK
Here's What Jeffrey Dahmer's Dad Has Said About His Other Son, David
By Grace Wehniainen
Where Is Lionel Dahmer Today? Jeffrey Dahmer’s Father Reflected On The Serial Killer’s Death In 2020
By Brad Witter
24 Years Ago, 'Friends' Dropped Its Most Underrated Ross & Rachel Episode
By Grace Wehniainen
Get Even More From Bustle — Sign Up For The Newsletter