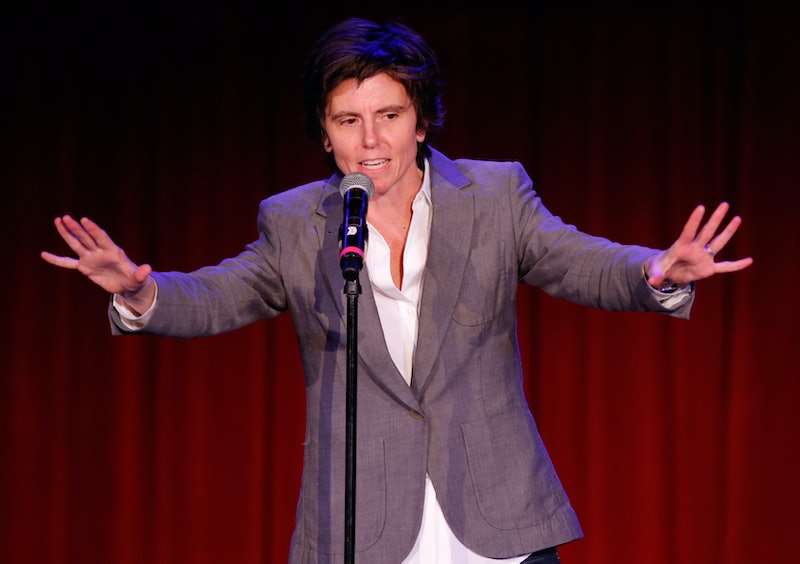 Tig Notaro is the kind of comedian who barely needs bits to be funny and magnificently insightful, let alone the usual trappings of a big-time stand-up show. And that's why I've been counting the hours to the premiere of her Showtime documentary Knock, Knock It's Tig Notaro . In the movie, Notaro embarks on a kind of guerilla comedy tour with camera in tow. She performs in regular people's backyards, basements, living rooms, and, in at least one instance, the kind of van that looks and (probably) smells like it's been an unwilling party to some questionable activity.

There's no fussiness about Notaro as a performer. She's perfectly at home (or good at faking it, at least) in circumstances where seemingly no one could pull the laugh. No one else, that is. With delivery so deadpan you half expect her to roll-call Ferris Bueller, Notaro rocks it at the mic, the late-night couch, and, as we'll see on Friday, anywhere where comedy fans can find a space to sit and listen. The comedian is also a born storyteller, with material that appears to meander but comes solidly full circle when you least expect it. Before you tune in to her big-time premium cable special, read up on these eight reasons why you'd be ridiculous not to adore Tig Notaro.

1. She'll teach you the most diabolical way to get back at your flaky friends.

"What's your ETA?" So simple. So elegant. And they so deserve it.

2. Her story about '80s b-list pop star Taylor Dayne is one everyone should hear before they die.

I think about this bit at least once a day. I wish I were kidding.

3. A regular set at Largo in Los Angeles in 2012 became legendary when Notaro worked through her breast cancer diagnosis on stage.

You've never heard anything like it. Thankfully, every bit of fear, bravery, and shock that she and her audience experienced that night was recorded to go down in stand-up (nay, human) history.

4. And she continues to mine her identity as a survivor for the noble sake of comedy.

Tig also speaks openly about the recent death of her mother; this is life, y'all. This is the realness. And it's got to be empowering for others battling the disease or coping with grief.

5. Sometimes she makes Amy Schumer do it too.

Notaro is a writer and occasional guest actor on Inside Amy Schumer, where the comedy runs strong, deep, and fierce.

6. She brought body policing and misgendering people to their knees when she performed topless for an audience in New York.

As she told the story about a TSA agent not believing that a post-mastectomy Notaro was in the right pat-down line at the airport, she made an impromptu statement by removing her shirt to finish her set. So hardcore.

8. But she's never too busy to be an enthusiastic contestant on The Late Late Show's "Musical Chers."

Everyone who has been in the presence of Cher is on just a little higher of a plane than the rest of us.

Notaro's Showtime documentary will be followed quickly by her first HBO stand-up special. Is it too early to call 2015 The Year of Tig?

More like this
Idris Elba "Breaks Out" Of London In 'Luther' Film First Look
By Sam Ramsden
Here’s Everything Coming To & Leaving Netflix In December
By Jake Viswanath
Idris Elba & Tom Hollander Lead This Year’s Must-Watch Christmas Flick
By Maxine Harrison
The 'Love, Lizzo' Harry Styles Scene Is Just 1 Moment That Made Fans Feel Seen
By Brad Witter
Get Even More From Bustle — Sign Up For The Newsletter