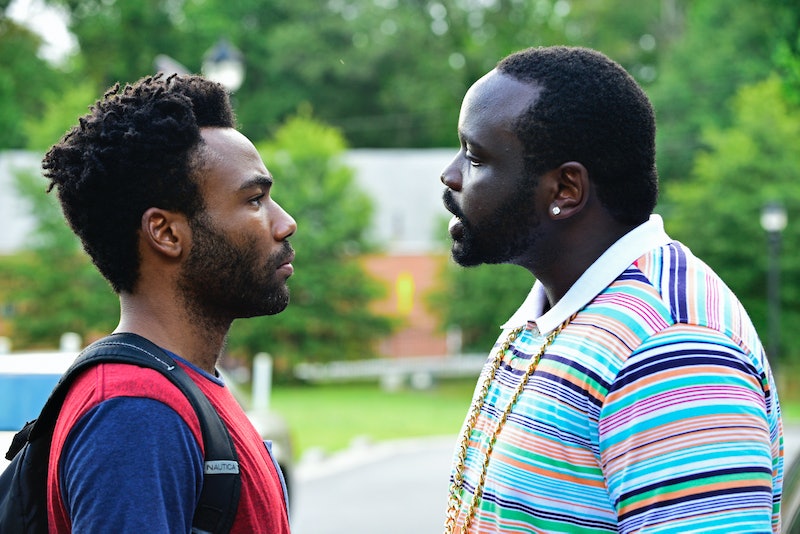 A writer, comedian, actor, and rapper under the name Childish Gambino, Donald Glover can now add Executive Producer to his list of credits. The Hollywood Reporter reported in 2013 that the former Community ensemble member and 30 Rock writer had inked a development deal with FX for "a music-themed comedy." It's three years later, and FX aired the first two episodes of Atlanta in a one-hour premiere on Tuesday night. First impressions? That was time well spent. Atlanta isn't populated by the thinly-drawn characters you might find in other pilots, which are doing their best to keep their options open. Glover's character Earn, his aspiring rapper cousin Alfred "Paper Boi" Miles, his sort-of ex Van, and the rest of the individuals Earn encounters during a day in his hometown feel like they exist outside of this space, like they keep arguing with each other after the credits roll. The show also asserts itself in these early episodes as a source of social commentary. Earn and Alfred are arrested in the Atlanta premiere, and the show uses that opportunity to address what it sees as the shortcomings of the criminal justice system.

The audience doesn't see exactly what goes down to get Earn and Alfred into a dirty, depressing waiting room, cracking jokes while the bored office staff books them. But the lead up is there. Earn, Alfred, and Alfred's shadow Darius sit in Alfred's car listening to "Paper Boi" being played on the radio for the first time. Alfred calls out to a girl walking by; uninterested, she blows him off. A few seconds later, the man she's with knocks the driver's side rear-view mirror off of Alfred's car. Outside of the car, a confrontation ends in a gun drawn, a shot fired, and the camera pulling back wide. But it must have been a warning shot, since Earn reminds Alfred at the station that there's "no victim" to whatever crime they're being charged with.

Alfred is bailed out quickly and asks a woman behind a glass partition if Earn will be too. Since he's "not in the system," Earn has to wait it out until bureaucracy does its thing. "I hate this place," Alfred announces. He can't even leave the precinct in peace. A starstruck officer runs up to him to ask for a selfie with an unamused Paper Boi. ("One more for the Insta-sluts.")

Earn is left to endure the wait alone. Alone but for uniforms and other perps, that is. After a while, a faceless woman hands him a plastic cup of yellow water and a sandwich of indeterminate age. When Earn begins to drift off, an officer smacks his chair with a nightstick and tells him he's not allowed to sleep, even though the process is what's keeping him in limbo between going home and occupying a cell for the night. At one point, officers and offenders alike bond over taunting an obviously mentally ill man as he drinks water from the toilet. Earn, who's new to this scene, suggests maybe this man should be somewhere else; everyone laughs. Proving Earn's point, the man tosses his cop of toilet water on an officer and gets a nightstick to the face.

With Earn as an observer, Atlanta cuts right to the mundane inefficiency of its version of small-town law and order. At best, it's getting food poisoning from a sandwich that's turned. At worst, it's an instance of police brutality carried out in front of witnesses who have no recourse to report it. There's little evil involved in this cycle, per Atlanta — more structurally mandated indifference.

The show's positions on racial, social, and civic issues are seamlessly embedded into story. (Transphobia, homophobia, economic disparity, and the n-word are also breached in the premiere.) These first two episodes — especially the police-to-civilian interactions — promise that Atlanta won't avoid making big statements.

More like this
What Does Michael Peterson’s Family Think Of 'The Staircase'?
By Arya Roshanian
Michael Peterson & Sophie Brunet’s Relationship Timeline
By Morgan Leigh Davies
All The Theories About Kathleen Peterson’s Death
By Morgan Leigh Davies
The 'It's A Sin' Creator Revealed A Massive Detail That Didn't Make The Final Cut
By El Hunt
Get Even More From Bustle — Sign Up For The Newsletter