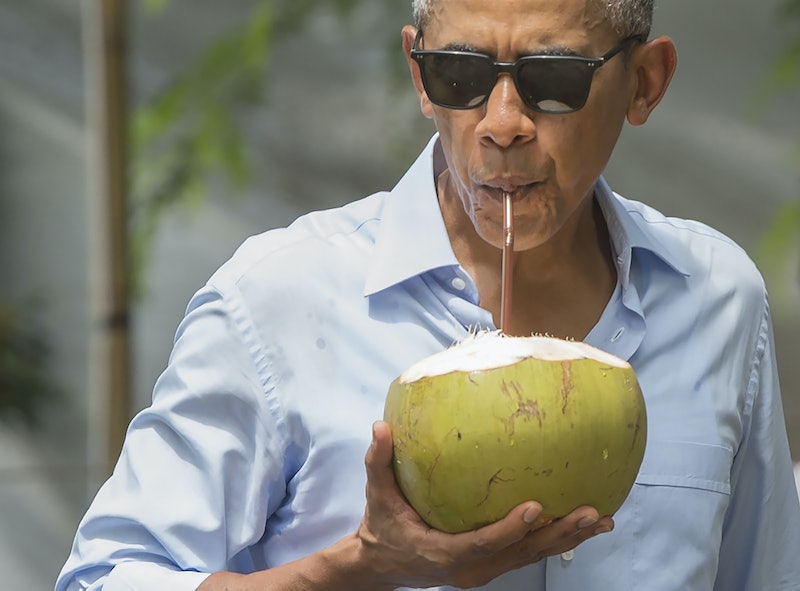 President Obama is currently in Laos, and he's the first U.S. president to ever travel to the southeast Asian nation. And even though not everything about the trip is happy or lighthearted ― specifically given the catastrophic American cluster bombing of the nation in the 1960s and 1970s ― there's no doubt that the trip is one of the last hurrahs of the Obama era, and he seemed to enjoy it. And if you're looking for a clear visual example of how much he enjoyed it, just look at this picture of Obama drinking from a coconut in Laos, just one of many times he's looked cool, smooth, and content while chowing down.

The Laos trip undeniably evokes some heavy and dire parts of the American legacy ― Obama took the occasion of his trip to announce a $90 million plan to help purge Laos of millions of unexploded bombs, a humanitarian gesture which, sadly enough, was not paired with an official apology for the bombings in the first place. But that doesn't mean Obama wasn't given a welcoming reception within Laos. And with that warm welcome came an eagerness to sample some of the country's fare. Whatever your politics, hopefully you can agree that coconuts are delicious and refreshing as they come.

It's not the only time he's looked smooth and satisfied while eating or drinking, either. He's always been one of our most effortlessly photogenic presidents. Just look at all these times he's looked a little too cool for school (and sometimes a little goofy) while partaking in the finest food and drink the world has to offer:

OK, so maybe he doesn't always look so elegant when someone snaps a photo of him mid-bite, but that's a standard nobody could live up to. It sort of seems like the sunglasses are a pivotal component to his looking crisp, suave, and chill while eating. Also, he looks all the better when he chows down in full presidential regalia:

Of course, nobody can look perfect every second of the day ― even the commander-in-chief is going to look a little awkward sometimes. But at least he's not in John Kasich territory, right?

His will surely be a food presidency to be remembered. Based on current reporting, it's hard to say exactly how our next president will navigate the tricky world of mid-bite photography ― outside of knowing that Democratic presidential nominee Hillary Clinton has a taste for Chipotle, and GOP presidential nominee seems to prefer a steady diet of McDonalds and knife-and-fork KFC (at least as his Twitter feed suggests).