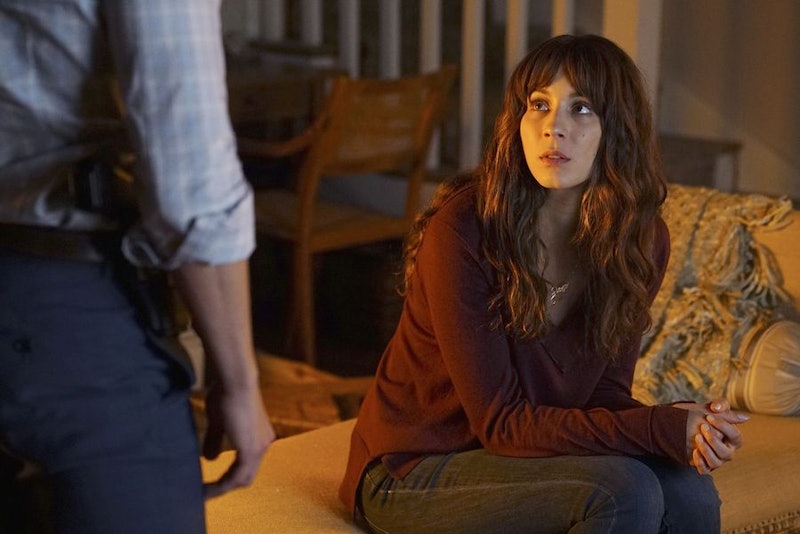 Pretty Little Liars may currently be on hiatus, but that hasn't stopped fans from speculating and theorizing over everything that went down during the Season 7A finale, which put multiple characters' lives in danger, including Spencer's. And while we'll unfortunately have to wait until Pretty Little Liars Season 7B premieres to get any concrete answers to everyone's fate, it doesn't hurt to go back and try to figure out as much information as possible about what happened that night — including who shot Spencer in the first place. Because even though the writers certainly tried to make it look like it was Jenna, she wasn't the only person lurking around upstairs.

When Jenna was holding the gun, she heard the Liars moving around and fired a shot while the girls were running down the stairs for cover. But then a second shot rang out right after Spencer screamed "No!" to the shooter. Was it Jenna trying once again to hit her target or did someone else have a gun up there — someone like A.D. perhaps? We know A.D. was there and saw him/her grab Jenna after Mary Drake knocked her out before she could finish Spencer off. So it's entirely possible that A.D. is the one really responsible for Spencer's severe injury, not Jenna. After all, we never actually saw her finger pull the trigger for a second time, though she did seem perfectly capable of committing the crime herself if the opportunity was given to her.

There's also the fact that when Jenna regained consciousness, she asked her captor if they had shot Spencer. Was she referring to the gunshot that initially wounded the Liar or was she merely asking if they had finished what she had started? It's difficult to say based on her wording, but if it's the former, then Jenna isn't the guilty party after all. My money is on A.D. being the true culprit, who probably always has a gun stowed away just in case.

Of course, we can't rule out the possibility that Mary could've fired that second shot and pretended to save Spencer from Jenna to cover her tracks. Granted, it seems unlikely, considering she may very well be Spencer's biological mother, but it's something we should at least consider since we have no idea what she was doing lurking around this abandoned school in the first place. I mean, how did she even know they'd be there if she wasn't in cahoots with Jenna, Noel, or A.D.?

There is also one more option to consider if you're feeling extra suspicious about everyone these days: the possibility that Spencer shot herself and then quickly hid the gun somewhere. I have no idea what her incentive would be for doing such a thing, but if you're still convinced that one of the Liars has something to do with A.D., this theory could help prove that very notion. If Spencer really is Charlotte's sister, then I guess anything is possible.

Either way, don't be too quick to jump to the conclusion that Jenna is the one completely responsible for what happened to Spencer. In true PLL fashion, there are a lot of options to consider and the truth is almost never straightforward.