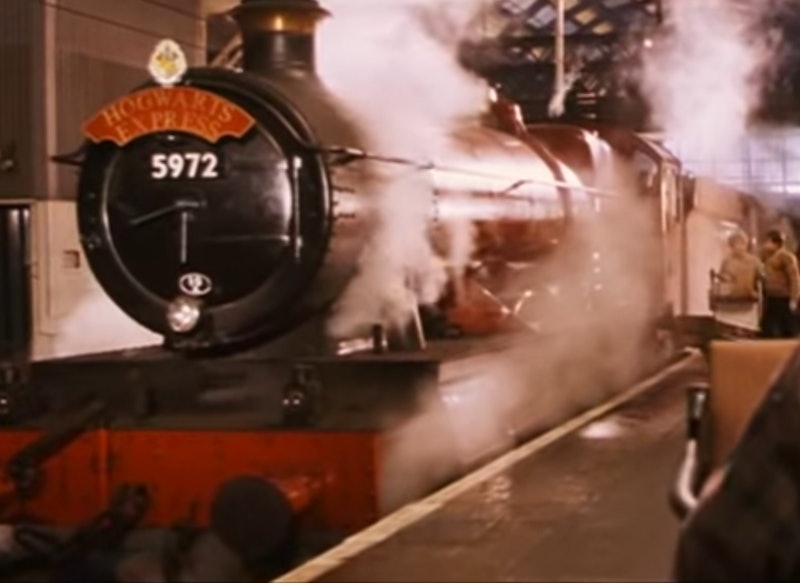 At the beginning of September, wizards and witches across the U.K. set off from King's Cross on that splendid train which would take them to school — but I bet none of them stopped to consider the history of the Hogwarts Express, and why it's actually rather controversial. In Hogwarts: An Incomplete and Unreliable Guide, one of three newly-released Harry Potter e-books that combine previously-published Pottermore articles with new writing from J.K. Rowling, readers were treated to a full history of the famous train. It may seem pretty magical to us Muggles, but it turns out that not everyone was totally happy with it from the start.

According to historical accounts, Hogwarts students used to be free to travel to Hogwarts however they liked — be it by broomstick, enchanted carts, or on the back of some mythical creature. This was all fine and dandy until the International Statute of Secrecy was imposed in 1692, rendering accidental sightings by Muggles not only bewildering, but also illegal. Suddenly, Hogwarts was faced with the challenge of discreetly transporting their hundreds of students to school without attracting the attention of the Muggle population — which is not an easy problem to solve.

At last, the Hogwarts Express was born. Readers have wondered in the past why the train only departs from London, meaning that Scottish students who already live close to the castle have to travel the length of the U.K. there and back — but this finally makes sense. Keeping all Hogwarts students safely in one place while they travel is really the only feasible solution, even it means a rather lengthy travel time for some.

But just because it was the best solution doesn't mean that everyone was happy about it. In fact, some pure-blood families were absolutely mortified at the idea of their children using Muggle transport. (I bet an ancient Malfoy line was right up there complaining about it!) However, their objections were silenced; to this day, the Hogwarts Express is the only permissible way for students to arrive at school — a rule that Harry and Ron very boldly broke when they arrived in a totally illegal flying car.

But wait, the most controversial part of this story is yet to come. J.K. Rowling didn't fully reveal the origins of the Hogwarts Express train, but she did hint that records show 167 Memory Charms were used during the operation — and that some Muggle railway workers were left "grappling with the uncomfortable feeling that they had mislaid something important." Oh that sneaky, sneaky Ministry of Magic...