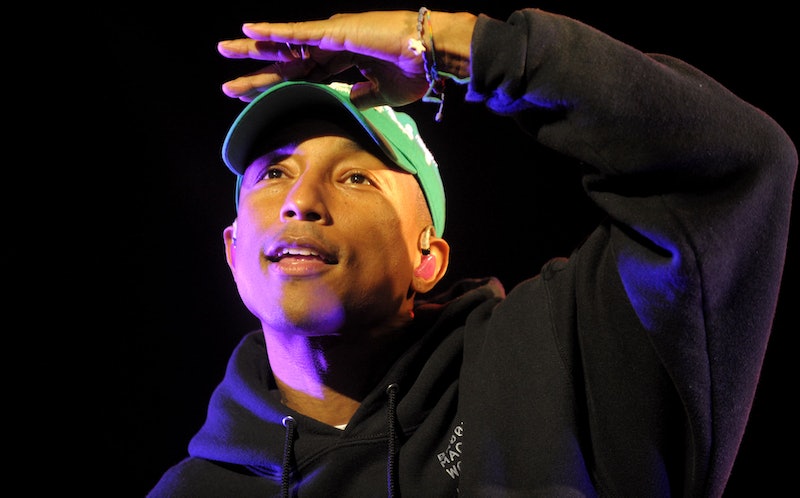 As Apple kicked off its Live Event on Wednesday, Sept. 7, singer Pharell Williams made a guest appearance in a "Carpool Karaoke" segment that started off the day with Apple Music. Williams joined Apple's CEO Tim Cook and the Late Late Show host James Corden as Cook pulled up to Wednesday's Apple Event. They shared words and jokes with Siri while singing "Sweet Home Alabama" before dropping Cook — an Alabama native — at the event at the Bill Graham Civic Auditorium in San Francisco.

The trio wore light up glasses as they sang and drove around downtown Los Angeles before dropping Cook at the event in San Francisco — that's quite a drive between the two cities. Apple's latest event announced some big news, including updates to the Apple Watch and the newest upcoming iPhone release. The latest iPhone introduced some updates to its battery life, Touch ID, and some big changes to the phone's cameras. And for all the Pokemon Go fans out there, Apple announced at its event that the game is now coming to Apple Watch.

We're excited about all the announcements that the company made on Wednesday, and were lucky enough to have gotten another special guest appearance when the event came to an end. Apple ended its big announcement event with a surprise performance from Sia, who released her latest single and music video for "The Greatest" with Apple Music earlier this week.

Apple's announcements on Wednesday included battery life that's longer than ever before, a dual-camera system that's almost just as good as a standard DSLR camera, and a water and dust resistant phone. During the event, Apple's senior vice president of Worldwide Marketing, Philip Schiller noted, "iPhone 7 and iPhone 7 Plus dramatically improve every aspect of the iPhone experience, reaching a new level of innovation and precision to make this the best iPhone we have ever made."

The new iPhone will be available for pre-order as soon as Sept. 9, with shipping starting on Sept. 16, which is the phone's official release date.

More like this
How To Use Festify, A Spotify Plug-In
By Emma Carey
Harry Styles Addresses The Theory That His New Song "Daylight" Is About Taylor Swift
By Jake Viswanath
Rihanna Is A Mom Now After Giving Birth To Her First Baby With A$AP Rocky
By Ananya Panchal and Jake Viswanath
Joe Alwyn Reacts To Taylor Swift Earning An NYU Doctorate In A Rare Interview
By Jake Viswanath and Nicole Pomarico
Get Even More From Bustle — Sign Up For The Newsletter