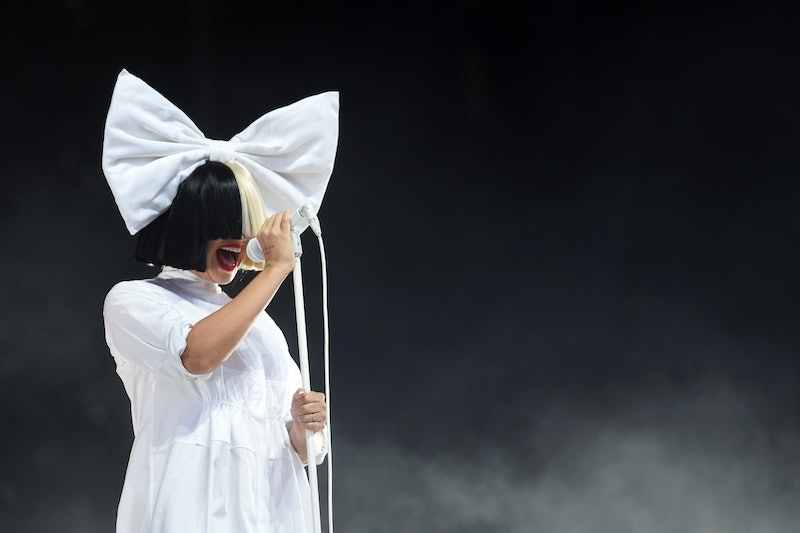 Just when we were getting over some of Apple's big surprises during their Live event on Wednesday, singer and songwriter Sia showed up and performed her new single "The Greatest," which features Kendrick Lamar. Sia closed out the event with this new single, and with her hit "Chandelier." Apple CEO Tim Cook introduced Sia to the stage at the end of their event, noting that "music is at the core of our DNA. It deeply inspires and moves us ... We are going to have an amazing artist join us." You can watch Sia at the Apple Live event.

Cook also noted that Sia's new song "The Greatest" and the accompanying music video premiered on Apple Music earlier this week. Wednesday's event would be her first time performing the song, which included a guest appearance from none other than dancer Maddie Ziegler, who often collaborates with Sia.

The video premiered online on Monday, Sept. 5 and opens with the hashtag #WeAreYourChildren. The video then turns to Ziegler as she wipes rainbow paint down her face and dances along with 49 dancers before they later collapse to the ground. VICE's i-D notes, "The dancers — 49 of them — let loose before collapsing on the ground to expose a wall pierced with bullet holes," suggesting it could be a tribute to the shooting at Pulse nightclub in Orlando in June.

You can watch Sia's performance at the below link. The performance starts at the end of the video, with the number marker showing about 23 minutes left.

Matt Moseley, one of the dancers who was featured in the video shared a photo to Instagram on Tuesday with a caption that read, "Humbled to be a part of this video ... 49 beautiful lives lost. This is for you. #WeAreYourChildren." While Sia has not publicly confirmed that the video is a tribute to the Orlando Pulse nightclub shooting, this would not be the first time that she has stood in solidarity with the LGBTQ+ community, according to i-D.

On June 12, 2016, 49 people lost their lives during a horrific shooting at Pulse, a gay nightclub in Orlando. Fifty-three others were injured and hospitalized at the time. The last patient from the shooting was released from the hospital on Tuesday, Sept. 6.