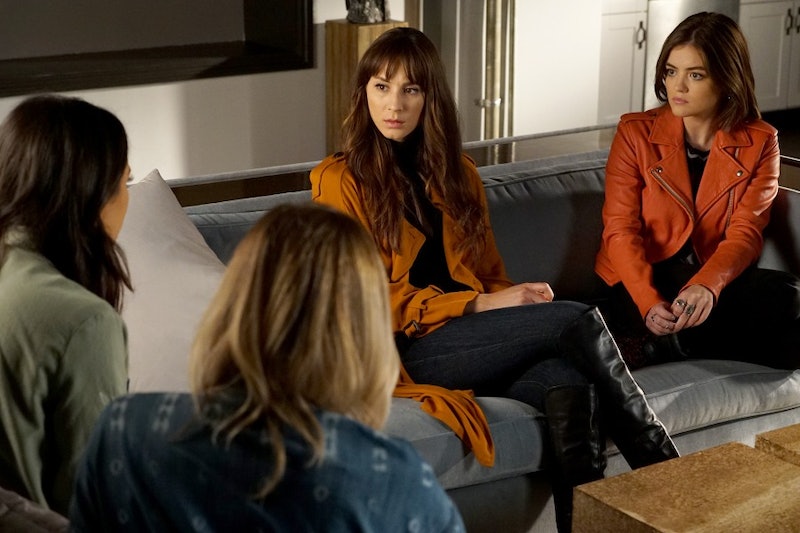 Warning: Here be spoilers for Season 7's first 10 episodes. Look. I get it: things look pretty damn fishy when it comes to one Spencer Hastings on Pretty Little Liars. Not only has she been acting strangely out of character this season (emotional outbursts, little in the way of logic), but, in the first half of the Season 7 cliffhanger, when Spencer got injured, Mary Drake claimed that Spencer is her daughter. Add to this the various incriminating aspects of Spencer's history — her stay at Radley, for example, where every PLL killer so far has stayed at some point — and there's one calculation viewers are being quick to make: Spencer = A.D. But Spencer Hastings is not A.D., and here's why I don't quite buy the theory.

First of all, we don't even know if what Mary Drake is saying is actually true. Spencer is unconscious, so we don't get a reaction from her. If Spencer is A.D., and her motivation to torture the Liars is based on her tangled family history and connections to the DiLaurentis clan, you'd feasibly expect the showrunner to use this scene to give us a glimpse of the true Spencer. The fact that she's passed out means that this moment is totally unreadable.

Second of all, let's be real. Spencer is emotionally committed to the Liars. After so many years, I refuse to believe that her return to Rosewood is just to torture her best friends — especially since she's not particularly close to her family (her mother being the key exception). This isn't to suggest that Spencer isn't key to the whole mystery. I believe that we have one last twist to go: Spencer Hastings has a twin, and it is this twin that is A.D. Let's examine the evidence. In a prettylittleliars.com interview, the actress who plays Spencer, Troian Bellisario, said:

[She] has a whole history that I think is going to be really fun for everyone to finally learn about. I think that it’s going to be very surprising to people.

One part of that history could be that she's related to Alison. But, if she's related to the DiLaurentis family, that brings up the obvious: twins run in families. (Though it's fraternal twins, not identical twins, that run in families, I'm sure Pretty Little Liars would go with the more dramatic option here.) So, if Spencer is Mary Drake's daughter, couldn't Spencer have her own twin, just as Mary Drake is Jessica DiLaurentis' twin? When Hanna gets tortured, she dreams Spencer comes to visit her and gives her advice. When she escapes, she tells Spencer about it, and Spencer acts as if Hanna has been dreaming.

But, in the Pretty Little Liars universe, dream appearances of the central Liars are never dreams. Historically, they've always been actual appearances; think, for example, of all the times Ali appeared in dreams when she was missing. If Spencer isn't aware of the appearance, could it be because it wasn't Spencer at all, but her twin? If this sounds far fetched, why doesn't Spencer have bangs in her dream appearance, anyway? Just an oversight by the costume department, or was this planned to alert the audience to the fact that it's Spencer-but-not-quite?

Ultimately, I can't believe the Spencer Hastings we've spent so many years watching defend her friends so loyally would be A.D. Not even if her mother was Mary Drake. But an evil twin Spencer, with Spencer's same intelligence and cunning, but without her moral compass? Why, that sort of Spencer would out-A even Mona. So I'm calling it: Spencer Hastings is not A.D., guys. But her twin could be.

More like this
Taylor Swift Is "Spiraling" After Releasing "This Love (Taylor's Version)"
By Jake Viswanath
What’s New On Netflix: A Victoria Justice Rom-Com & The Return Of David Letterman
By Arya Roshanian
Will Vampire In The Garden Get A Season 2? What To Know
By Kadin Burnett
'Bridgerton' Season 4 Will Likely Focus On This Brother's Divided Heart
By Grace Wehniainen and Alyssa Lapid
Get Even More From Bustle — Sign Up For The Newsletter