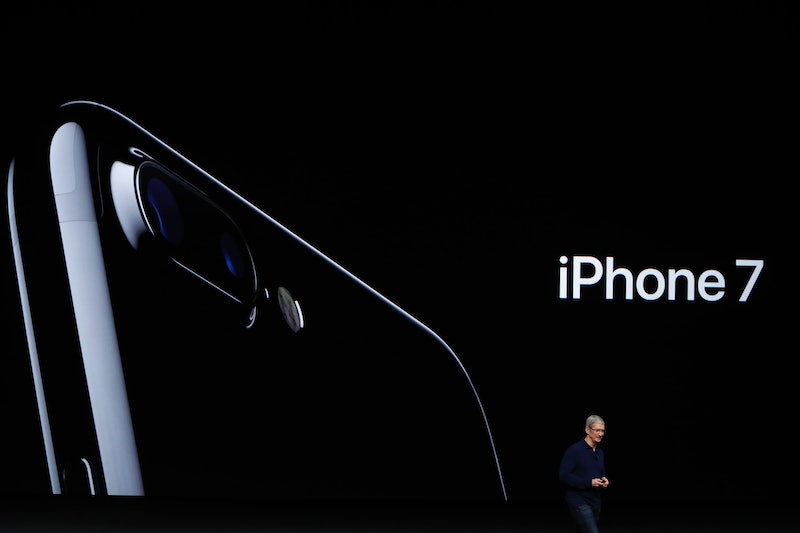 At the Apple Keynote event in San Francisco on Sept. 7, Apple confirmed most of the tech world's predictions when they announced that the iPhone 7 will not include a headphone jack. This will maintain the iPhone's sleek body that we're accustomed to. But exactly how thin is the iPhone 7? According to Apple's website, the iPhone 7 is .28 inches (7.1 millimeters) and the iPhone 7 Plus clocks in at a slightly larger .29 inches (7.3 millimeters). The new versions are no thinner than the iPhone 6 and 6 Plus, respectively. The height and width of the two new versions have also stayed the same, compared to the two previous models. What sets them apart is largely the technology inside, as well as an enhanced camera, water resistant ability, and of course, the missing headphone jack. They are also (very) slightly lighter — 4.87 ounces and 6.63 ounces for the 7 and 7 Plus compared to 5.40 ounces and 6.77 ounces for the 6 and 6 Plus.

Over the years, the length of iPhone models have become increasingly larger, while shrinking in depth. The screen length of the original iPhone in 2007 was 3.5 inches. The screen length of the phone stayed the same until the introduction of the iPhone 5 in 2012, which was 4 inches. The iPhone 5 was also thinner than the previous versions because of the glass and aluminum backing on it. The enhanced materials made the device 18 percent thinner, as well as 20 percent lighter, according to Fortune.

The new iPhones are slightly thinner compared to Androids. The Samsung Galaxy S7 Edge is .30 inches, the Galaxy Note 7 is .31 inches, the LG V20 is .30 inches, and the Nexus 6P is .29 inches. The Androids do feature bigger screens overall, measuring at 5.5 to 5.7 inches.

While it's a little disappointing that the loss of the headphone jack doesn't equate to a thinner phone, the versions that we already have are probably thin enough. It's likely a good thing that Tim Cook and friends decided to focus more on the mechanics inside of the phone itself rather than concern themselves with making the new phones slimmer. A longer battery life and enhanced camera capabilities are great additions to the new versions.

More like this
Using Your Pet’s Name As A Password? Here’s Why You Might Want To Change It
By Cristina Sanza
The 10 Best Waterproof Watches For Swimming
By Lauren Moison
The 8 Best Polaroid Cameras For Weddings
By Megan Gray
The NuFace Trinity Facial Toning Device Convinced Me To Quit Botox
By Danielle Sinay
Get Even More From Bustle — Sign Up For The Newsletter