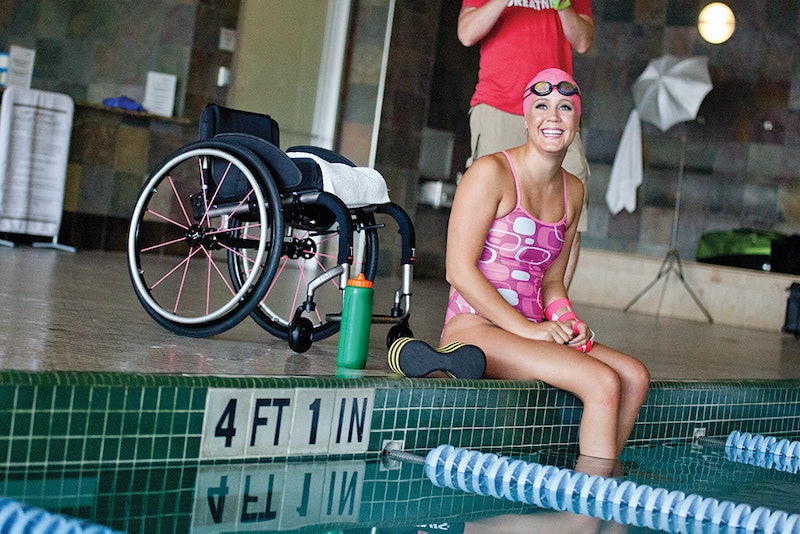 Imagine walking into the doctor’s office for a routine procedure — one you’ve received twice before without complication — expecting to walk out a couple hours later feeling better only to be transferred to a hospital, permanently paralyzed below the abdomen. That’s what happened to Paralympic swimmer Mallory Weggemann, who was just a freshman in college when she became paralyzed in January 2008 following a simple lumbar epidural injection to treat post-shingles back pain. What Weggemann did from that point forward, however is what defines her — she got back in the pool. "Once I finally took that leap of faith and got in the water, within four or five strokes, I fell in love with the water all over again," she tells Bustle.

On April 8, 2008, not quite 11 weeks after losing function in her lower body, Weggemann returned to the pool where she had competed in high school. "Initially going into that first day I was terrified. I didn’t even bring my suit with me to the pool because I wasn’t convinced that I was ready to get back in," Weggemann tells Bustle. "Although, my luck had it that one of my former high school teammates and friends growing up swam for the Minnesota Gophers at the time and had just finished practice herself, and she had an extra suit on her."

Weggemann couldn’t kick. She wasn’t sure how she would deal with diving off of a block. She didn’t know how she would turn around without the traditional wall-kick in her arsenal, but Weggemann didn’t back down. "The black line became my home again and everything felt natural, it felt like the one thing that hadn’t changed over those past two and a half months," she says. "Swimming saved me and from that day forward, I went back to the pool every day and never looked back."

Weggemann really didn’t look back — unless you count looking back at her competition after out-hustling para-swimmers and able-bodied Division 1 athletes alike, or looking back after shattering the long-standing world record in the para-swimming 400-meter freestyle by almost five seconds.

Now, Weggemann is heading to Rio to compete in her second Paralympics. She’s competed in Rio before, of course, back in 2009 for the International Paralympic Committee’s Swimming World Championships. That time, she made the trip home with five gold medals tucked into her luggage. A year later, it was eight more golds and a silver. She won another gold medal (and a bronze one) at the London Paralympics in 2012.

When Weggemann is home, she trains five days a week alternating between pool time with her swim coach and work with her personal trainers. When she’s not training, she has a particularly loyal friend — her yellow lab, Sam. "Sam has honestly been a big part of this journey," she says. "Following my arm injury, I have been very fearful of falling. I don’t sleep as well at night when I am battling the pain and he is constantly there. He is the absolute best companion and he is so loyal and loving."

The arm injury she mentions happened in 2014, when a shower bench at a hotel in NYC collapsed from under her. The doctors said the injury she sustained to her arm, like the paralysis in her lower body, was permanent, but that wouldn’t keep her out of the water either. Again, she spent time healing and training, and returned to the block in 2015 for the World Championships and the Parapan American Games where she earned her spot on this year’s Paralympic squad.

If you look up the word tenacity in the dictionary, you might find a picture of Weggemann smiling despite her personal adversity. Though, ask her about her support system and she’s as humble as ever. "It is such an honor to partner with Head & Shoulders for their Shoulders of Greatness campaign," Weggemann says. "The confidence that comes from having beautiful hair and the kind of support I have both in and out of the water allows me as an athlete to focus on competition and on my racing." And she shows the same appreciation when it comes to her hard-won Paralympic medals. "I travel with [my medals] and bring them out for all of my speeches as I truly believe they are meant to be shared," she says. "After all, it takes a community to win a medal; the medal deserves to be shared with a community.”

Where does Weggemann keep her medals when she’s not traveling? "My Paralympic medals are actually kept in a pair of socks." Weggemann’s first races in Rio are Sept. 8 when she competes for another gold in the 400-meter freestyle.