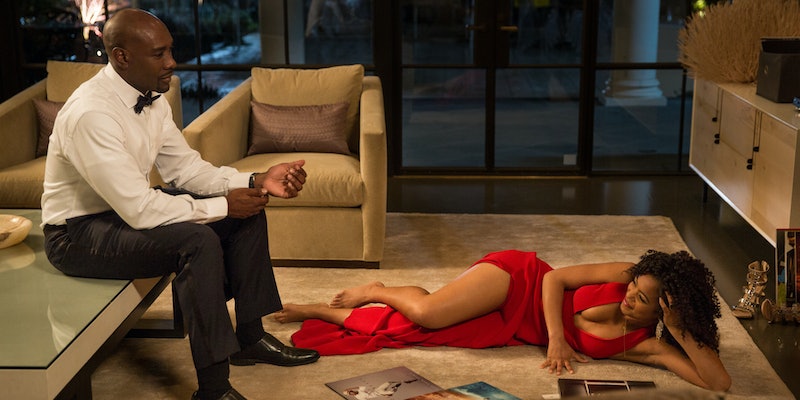 Fans of sexy thrillers are in for a treat when the new film When the Bough Breaks hits theaters on September 9. The movie stars Morris Chestnut and Regina Hall as a couple who are unable to have a baby, no matter what they try. When a young woman (Jaz Sinclair) enters their lives to act as a surrogate, they think their prayers have been answered. But as their new surrogate grows more attached to the expectant father, the situation gets scary fast — resulting in her kidnapping her own baby and trying to destroy the parents' lives. It's a plausible enough plot, but is When the Bough Breaks a true story?

Thankfully, the movie is not true. It's a work of fiction written by screenwriter Jack Olsen, who previously penned the indie thriller Sleepwalker. And while the film isn't inspired by any actual events as far as I can tell, there are certainly elements of it that will seem a bit familiar to fans of the genre. The idea of a psychotic woman being in love with another woman's husband and trying to steal him away has been used in countless erotic thrillers, and other details from the movie — like the surrogate kidnapping the baby and the plot to destroy the life of the object of one's affection — have also shown up in other films. So if you like When the Bough Breaks, then check out these other sensual thrillers.

This is patient zero for the crazed lover thriller, and the film most often imitated by others in the genre.

In this Lifetime movie, a surrogate mother goes insane and tries to get her baby back from the parents after giving birth.

Another Lifetime movie, only this time it's the surrogate who's the sane one and the parents who are psychos.

The jilted lover wreaks havoc on the life of the man who rejected her in this nailbiter, based on a book by the author of Jurassic Park.

When the Bough Breaks isn't a true story, but it certainly seems to have drawn some inspiration from several thrillers that came before it by combining several elements into one pulse-pounding story.

More like this
A 'Bridgerton' Star Just Dropped A Major Hint About Joining The Live-Action Barbie Cast
By Bustle UK
10 Must-Read New Books Out This Week
By K.W. Colyard
'Derry Girls’ Dylan Llewellyn Will Star In C4’s New Queer Comedy
By Rachel Mantock
'Heartstopper's Kit Connor Revealed His Hopes For Season 2
By Nola Ojomu and Sam Ramsden
Get Even More From Bustle — Sign Up For The Newsletter