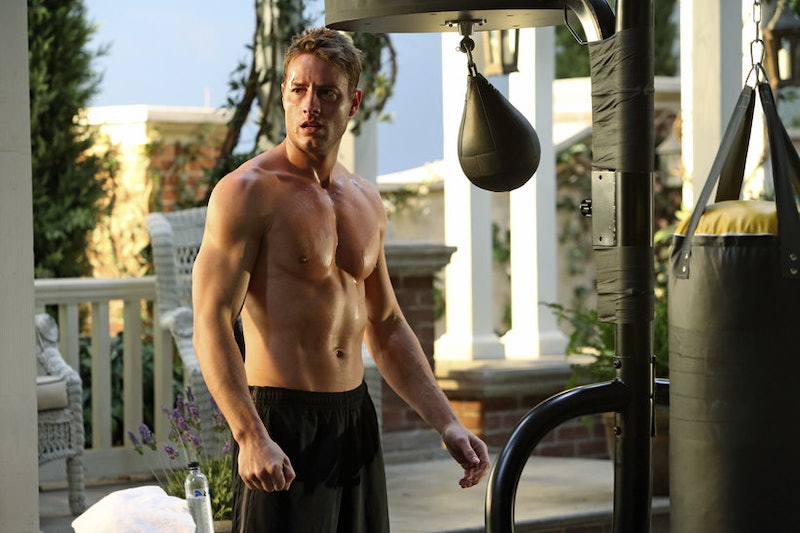 I'm not really sure how we haven't made this connection before, but ABC's Revenge is absolutely the East coast version of The O.C. (just with more adults). With that said, on last week's episode of Revenge , Victoria and Patrick bludgeoned her former rapist to death. He also happened to be Patrick's father, go figure, right? Anyway, Patrick felt guilty about bashing in his dad's skull — so he pulled a serious and classic Ryan Atwood on Sunday night.

Here's how the whole thing went down — which was very O.C. in the first place (more O.C. that Patrick shirtless with a speed bag in the above photo). Patrick found out that his father, Jimmy, was hanging around in the Hamptons being an electrician and a former rapist. When he burnt down his gallery, he needed someone to help rebuild — knowing Jimmy was an electrician, he hired him with the intent of electrocuting to death. But then got cold feet and didn't end up going through with it — it's cool, Patrick, we know you're not a coldblooded killer.

It turns out that Jimmy wasn't so ignorant to what was going down though, so he showed up at Grayson Manor, hit on Charlotte (kind of), and then called out Victoria and Patrick for trying to mess with him. Things got a little menacing and violent and Patrick ended up hitting him over the head with a blunt object. Self defense, right? The coroner ruled his death an accident — but obviously Patrick's nerves and conscience aren't quite so easily controlled as his dear mother's. Now I'll jog your memory.

So, The O.C. season three finale — Marissa dies when Volchuk runs her and Ryan off the road. And we were all really sad and it was dramatic and symbolic and everything a teen drama is supposed to be. Then came season four, which started with Ryan joining an underground fight club and getting his ass kicked because he was so overcome with guilt and grief and that was the only way he could feel something. Oh, and he'd run away.

On Sunday night, Patrick decided it would be a brilliant idea to run on over to Jimmy's favorite bar and crash his wake/memorial. Alright, he felt a little guilty — Jimmy was his dad, after all, and he was looking for some redeeming quality in his rapist father. Wrong. Patrick showed up at the wake to taunt Jimmy's friends during the memorial but calling his father out for the rapist he was. Why? So he could get his ass kicked. No, we're not even kidding. He needed some sort of punishment for his actions and Patrick chose to enter the ring (or the bar, rather) and get beaten to a pulp by a group of older guys. If that doesn't sound like a Ryan Atwood signature move, I don't know what does.

Of course Victoria was disturbed — she is his mother — so she sets Patrick up at the charity Art Walk to get his mind off of "the accident" and his foray into dive bar brawling. (Again, in true Atwood fashion, Patrick shows up with a black eye.) He ends up meeting one of his idols that wants to take him on as an apprentice in Florence immediately and Patrick bounces. And again, does it Atwood-style.

Instead of telling his mother in person, Patrick leaves her a long-winded voicemail. Patrick explains that he's so fiercely loyal to Victoria that he'd do anything — including kill people — for her, so he needs to leave. He also tells his mother that he just doesn't belong in the Hamptons and he couldn't tell her in person because "looking in her eyes" would make it hard for him to go. Patrick definitely watched way too much O.C. because being a martyr and peacing out without saying a proper goodbye because you don't belong and feel like your presence is bad for everyone is SO TYPICAL.

So Patrick's off to Florence to become a famous painter — but not before making us wonder what the East coast equivalent to Phantom Planet's "California" is, so we can start a petition to have it become Revenge's theme song.