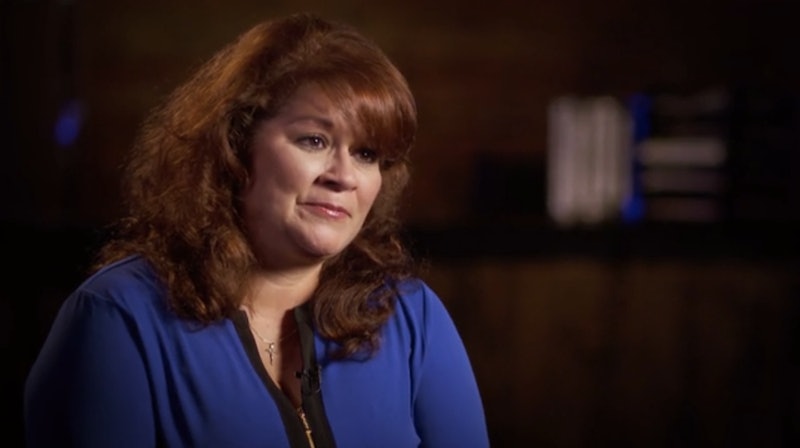 As we approach the 20th anniversary of JonBenét Ramsey's death in December, you may have heard that several new TV documentary specials will be re-examining one of the most famous unsolved murder cases in American history. The latest is Dateline NBC: Who Killed JonBen é t? airing Friday, Sept. 9 at 9 p.m. ET. The two-hour NBC special promises to offer up new revelations about the case, and that's partly due to an interview with Kimberly Archuleta. So who is she, and what does she have to do with JonBenét's case? Bustle has been unable to reach Archuleta at the time of publication, but will update with any future comment.

Well, it's kind of interesting that Archuleta's name hasn't been synonymous with the investigation in all these years, considering the fact that she was a part of it from the beginning. Archuleta was the 911 dispatcher who took Patsy Ramsey's call during the morning of Dec. 26, 1996, NBC News revealed in a press release announcing the Dateline special earlier this week. Dateline NBC: Who Killed JonBenét? will be the first time Archuleta has publicly spoken about what she heard during the call, a preview for the special says, which you can check out below.

You can hear a couple of minutes of that 911 phone call at the beginning of the clip. Just hearing Patsy Ramsey yell, "Oh my God!" should be enough to give you goosebumps, but you can listen to the full recording of the chilling 911 call on YouTube now.

Since this will be Archuleta's first time publicly speaking out about that 911 call, it should come as no surprise that she seems to have kept a low profile since that fateful day. Because it appears that she has lived her life outside of the spotlight, it's unclear what Archuleta has been up to since then. That means you'll just have to watch the Dateline special to find out what path her life has taken over the past 20 years. However, I can only imagine that receiving that 911 call changed her life forever.

Perhaps Archuleta's recounting of the 911 call will provide new insight into the JonBenét case since it has been a contested piece of evidence. According to an NBC News report, Patsy placed the call at 5:52 a.m. on Dec. 26, 1996 using a wall phone in her kitchen near where the ransom note had been found. This was about eight hours before JonBenét's body was discovered in the basement of the family home.

During the call, Patsy tells the dispatcher that her daughter has been kidnapped and that she found a ransom note. You can hear the worry and panic in her voice and heavy panting as the dispatcher attempts to gather information and calm her down. At the end of the call, it sounds like Patsy hangs up the phone, but some people believed the call wasn't really disconnected. One of those people is former Boulder Police Detective Steve Thomas, who claimed in his book JonBenét: Inside the Ramsey Murder Investigation that he believed you could hear Patsy and her husband John Bennett Ramsey talking to their son, Burke, at the end of the call, who they had told police had been asleep at the time, NBC News reported.

Police interrogated Patsy about the call, asking if she had said anything following her conversation with the dispatcher, to which she said she couldn't remember, according to a videotape of authorities questioning her recorded in June 1998, as reported by NBC News. The FBI and Secret Service both examined the 911 call and did not hear any conversation after Patsy hung up the phone. NBC News also had the tape tested by experts at two different labs, who did not hear any evidence of a conversation after the call ended either. The Ramseys have always maintained their innocence and in 2008, John, Patsy, and Burke were officially cleared of any involvement in JonBenét's murder due to DNA evidence and were issued a public apology by the Boulder County District Attorney.

It's possible that Archuleta's view on the 911 phone call could help us better understand that aspect of the case, but it should be a fascinating couple of hours of TV, nonetheless.