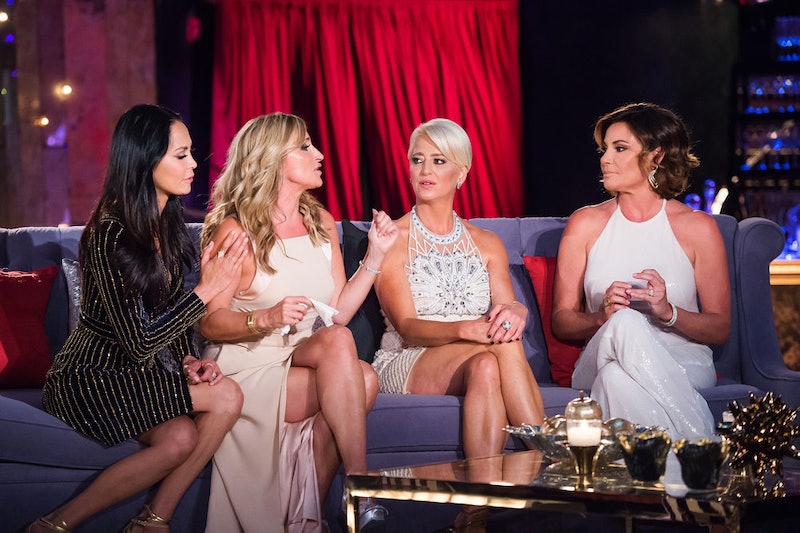 Another Real Housewives Of New York reunion, another hour of talking about Luann, her fiancé, Tom, and the relationship he may or may not have had with Sonja. At least this time it wasn’t all screaming at each other — in the second session of the reunion, Andy Cohen asked Sonja some questions about her relationship with Tom and the emotional hurt she felt when she found out that she was very suddenly losing not just a lover, but a friend. She is entitled to her feelings, you know? Unfortunately, during the RHONY reunion, Luann claimed that Sonja was allegedly lying about Tom and the extent of their relationship. During an episode this season, Sonja alleged that she and Tom has been "friends with benefits for 10 years." According to Luann, Tom allegedly slept with Sonja “one time." For his part, Tom told People magazine, "Sonja, I've known for years. The funny part is, although I've known her for years, we got together once, but she's on this kick that it was more than that."

A large part of Luann' claims about what Sonja allegedly remembered wrong hinged on Luann calling her out for drinking and forgetting things. Talk about a low blow, right? Sonja has struggled with her sobriety this season on Real Housewives Of New York, and as far as her epilogue in the final episode of Season 8 told us, Sonja was sober. Luann’s insinuation that whatever Sonja had to say about her relationship with Tom was a lie because she used to drink was so unfair, and it had to be really hurtful for their eight-year friendship. Bethenny and Ramona both said that they couldn’t believe that Luann would choose to believe a man she basically just met over a woman she’s been friends with — and even lived with for a time — for years. Luann even made that "crazy koo koo" swirling motion next to her head when Sonja was talking, as if Sonja was just babbling about nothing. Really, Luann?

It seems to me that Luann is just one of those people who, when they get into a relationship, all of their friendships fall by the wayside. Sonja was trying to talk to Luann and the group about how she felt with all of this Tom stuff, and Luann just shut her down because she couldn’t bear to hear anything about Tom’s past. I don’t know. But there’s one thing I do know — your friends are the ones who are there for you no matter what, so Luann better repair her friendships, or she could end up all alone.