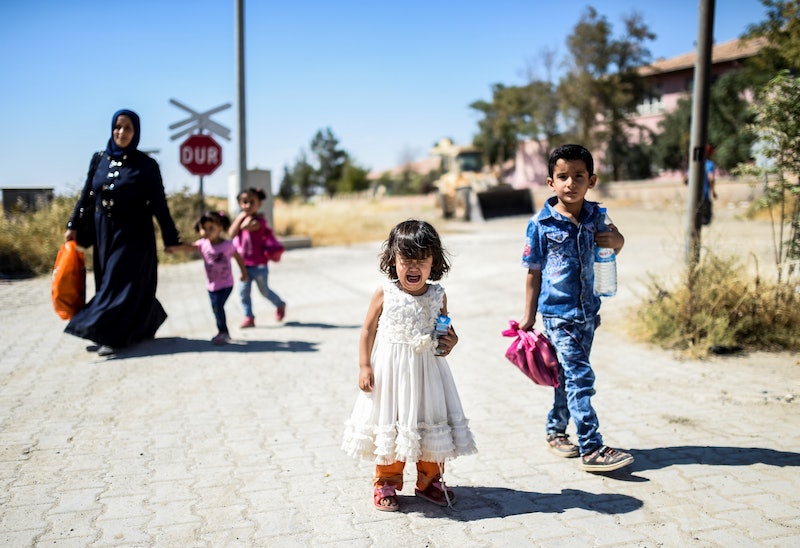 Sure, it's easy and valid to critique Gary Johnson's Thursday interview on MSNBC's Morning Joe , where when asked of the war-torn Syrian city, the presidential candidate alarmingly asked, "What is Aleppo?" However, to his credit, Johnson has already issued a statement, explaining his Aleppo error:

This morning, I began my day by setting aside any doubt that I'm human. Yes, I understand the dynamics of the Syrian conflict — I talk about them every day. But hit with "What about Aleppo?", I immediately was thinking about an acronym, not the Syrian conflict. I blanked. It happens, and it will happen again during the course of this campaign.

Hopefully, as the election continues, the discussion around the Syrian refugee crisis will involve more informed problem-solving, and less viral flubs. In the meantime, it's crucial that all of us, Johnson included, continue to educate ourselves on not only what the city of Aleppo is, but how exactly Syrian refugees are being affected by the crisis.

In response to Johnson's comments on Thursday morning, a number of news outlets and people have tweeted photos of Aleppo and those affected by the refugee crisis. The photos are both powerful and devastating. It's all too easy to compartmentalize the Syrian refugee crisis in our brains and therefore dehumanize those affected, which is why it's crucial to stay informed, support and donate to relief efforts, and listen to the stories of the people be affected. With this in mind, we've gathered some of the most recent photos shared that document what's happening abroad.

While documentation of the refugee crisis presents a difficult balancing act between exploiting photos of someone's pain and humanizing a global problem, sadly, for many of us it's all too easy to remain ignorant and passive towards global issues without visual reminders of what's going on.

The Aleppo devastation hasn't been talked about quite as much as, say, Donald Trump's wall or Hillary Clinton's emails. However, these photos remind us that even as we're caught up in a whirlwind election, there's a massive global crisis.

In lieu of the devastating stories of children affected by the crisis, NBC News published a series titled Aleppo: Children of War, that seeks to document the ongoing crisis through the stories of refugee children in Syria and surrounding countries.

PBS's Frontline also tweeted a powerful photo of a child affected by the Syrian civil war and also offers online the documentary, Children of Syria .

As an educational response to a more generalized ignorance surrounding the refugee crisis, The Atlantic also published a photo series that shows devastation of both the infrastructure of Aleppo, and the medical updates of civilians affected.

Colin Jones of The Daily Beast also shared a gripping and gruesome photo.

In light of the pervasiveness of the Syrian refugee crisis, perhaps Johnson's comments can be taken as a reminder for all of us to further educate ourselves.