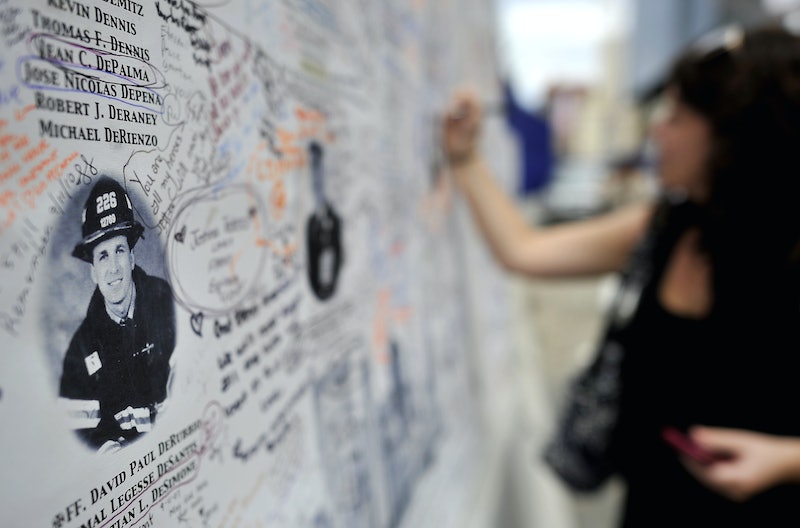 There's no doubt that September 11, 2001 was one of the most horrific days in U.S. history, but there is also no denying how much closer together it brought us as a country. These quotes about 9/11 capture America's unity following the attacks on the two World Trade Centers, and they remind us all that the United States is a country that won't ever succumb to terror.

It is often said that everybody knows where they were when the first plane struck the morning of September 11, but what's not brought up as frequently is that everybody knows where they were after both skyscrapers went down. Americans gathered in churches, community centers, and in neighbors' homes following the attacks, and this country became united in a way that it never before had been.

The relief efforts demonstrated just how much unity came to the forefront of Americans' agendas following the attacks at Ground Zero. No matter what your occupation was or where you were located in the country, millions of U.S. citizens chipped in where we thought we could help, be it through donations, powerful essays, search and rescue efforts, or prayer.

While it's difficult to look back on 9/11 without being overwhelmed with feelings of anger, despair, and pain, there is one positive thing that came out of it all: America became united in a way that was unbreakable.

2. "Ten years have passed since a perfect blue sky morning turned into the blackest of nights. Since then we’ve lived in sunshine and in shadow, and although we can never unsee what happened here, we can also see that children who lost their parents have grown into young adults, grandchildren have been born and good works and public service have taken root to honor those we loved and lost." — Michael Bloomberg

3. "Tonight, I ask for your prayers for all those who grieve, for the children whose worlds have been shattered, for all whose sense of safety and security has been threatened. And I pray they will be comforted by a power greater than any of us, spoken through the ages in Psalm 23: ‘Even though I walk through the valley of the shadow of death, I fear no evil, for You are with me.’" — President George W. Bush

4. "Remember the hours after September 11th when we came together as one to answer the attack against our homeland. We drew strength when our firefighters ran upstairs and risked their lives so that others might live; when rescuers rushed into smoke and fire at the Pentagon; when the men and women of Flight 93 sacrificed themselves to save our nation’s Capitol; when flags were hanging from front porches all across America, and strangers became friends. It was the worst day we have ever seen, but it brought out the best in all of us." — Senator John Kerry

5. "September 11 is one of our worst days but it brought out the best in us. It unified us as a country and showed our charitable instincts and reminded us of what we stood for and stand for." — Senator Lamar Alexander

6. "This mass terrorism is the new evil in our world today. It is perpetrated by fanatics who are utterly indifferent to the sanctity of human life, and we, the democracies of this world, are going to have to come together and fight it together." — British Prime Minister Tony Blair

7. "With almost no time to decide, [your loved ones] gave the entire country an incalculable gift. They saved the Capitol from attack. They saved God knows how many lives. They saved the terrorists from claiming the symbolic victory of smashing the center of American government. … They allowed us to survive as a country that could fight terror and still maintain liberty and still welcome people from all over the world from every religion and race and culture as long as they shared our values, because ­ordinary people given no time at all to decide did the right thing." — President Bill Clinton

8. "The city is going to survive, we are going to get through it, it’s going to be a very, very difficult time. I don’t think we yet know the pain that we’re going to feel when we find out who we lost, but the thing we have to focus on now is getting this city through this, and surviving and being stronger for it." — Rudolph Giuliani

More like this
5 Ways To Stand In Solidarity With Women In America From The UK
By Sophie McEvoy
How To Fight For Reproductive Rights, Based On How Much Time You Have
By Courtney Young
Windrush Victims Are Still Waiting For Compensation
By Sam Ramsden
How Getting An Abortion Has Changed From The ’60s Through Today
By Amanda Chatel
Get Even More From Bustle — Sign Up For The Newsletter