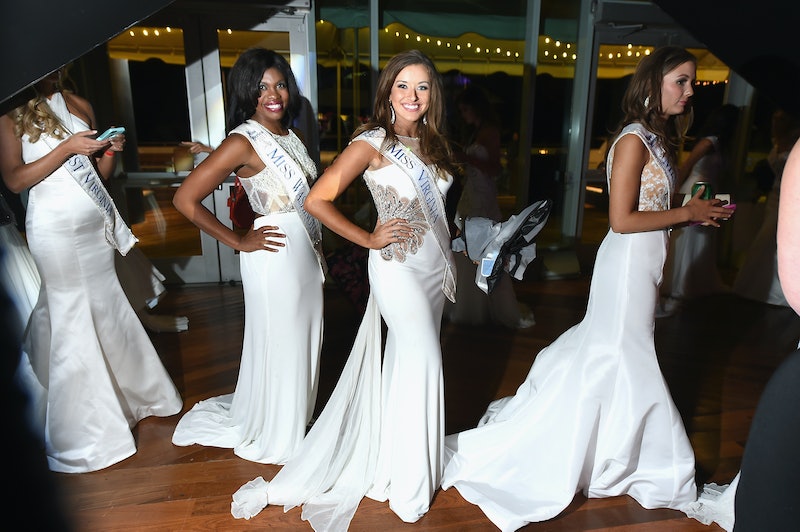 Get ready for a night full of gowns, talents, and sky-high heels, because the Miss America pageant is finally here! The popular competition is set to take place on Sunday, Sept. 11, and it's sure to be a show full of, well, pageantry — all culminating with the current Miss America, Betty Cantrell, passing her hard-won crown onto the new queen. You might be wondering, though: If America has only 50 states, then why are there 52 Miss America contestants competing for that crown this year?

It might seem counterintuitive at first, but if you look at the facts, it actually makes sense. You see, in addition to the expected 50 states, Miss District of Columbia and Miss Puerto Rico are also in the race for the coveted Miss America title. Interestingly enough, back in the Miss America 2015 competition, there were actually 53 competitors, with Miss Virgin Islands also vying for the crown. However, the Virgin Islands withdrew from the 2016 and 2017 competitions, so we're back down to 52 now.

Still, I'm sure 52 contestants will be more than enough to make for a nail-biting competition, so it's sure to be a great show, even if there's one less woman competing than there was a few years ago.

Meanwhile, Miss Puerto Rico, Carole Rigual, performed a dramatic monologue for the talent portion of the preliminaries, and while she didn't win that portion of the contest, she did manage to raise a lot of eyebrows. As reported by NJ.com, some believed that her monologue, "Crossroads," during which she wore a devilish red bodysuit and talked about being elected president, may have been referencing Donald Trump. Rigual hasn't confirmed whether or not that was her intention and Bustle's request for comment from the Miss America Organization on the monologue has not yet been answered. Regardless of what she may or may not have been trying to say, Miss Puerto Rico put on quite the show.

There may be 52 contestants competing in the Miss America pageant on Sunday, but clearly, some have already started to stand out.

More like this
17 BTS 'Love Island' Secrets Only Real Fans Will Know About
By Bustle UK
Howard Stern's Net Worth: Is He The Richest Man In Radio?
By Hugh McIntyre
Kris Jenner Drunkenly Toasts Khloé Kardashian’s 38th Birthday With This Speech
By Grace Wehniainen
Only 3 Of The One That Got Away Couples Seem To Still Be Together
By Brad Witter
Get Even More From Bustle — Sign Up For The Newsletter