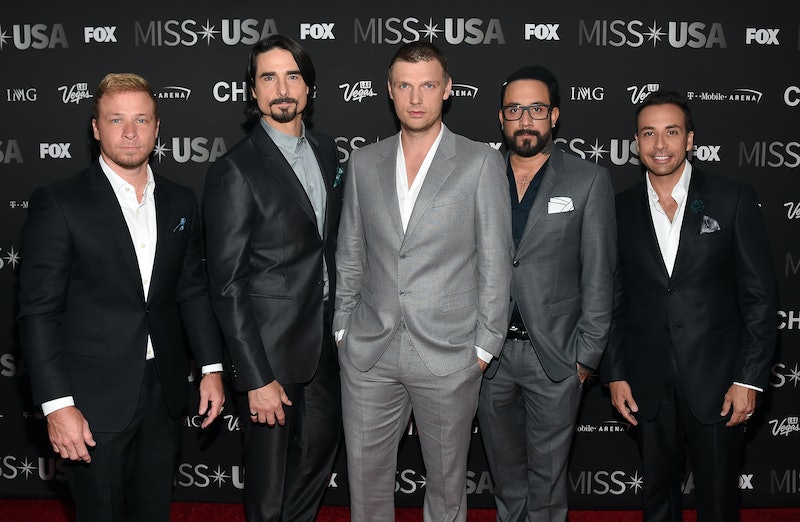 Remember when the Backstreet Boys dominated the charts and the headlines? Back in the halcyon days of 2003, Nick Carter and Paris Hilton were the prom king and queen of the pop culture circuit, and BSB were in the middle of slogging away at their fifth album Never Gone. But who could have called it? Just a few years later, they would begin to fade out of the public eye following their departure from their record label Jive Records and due to personal struggles experienced by members of the group. So what have the Backstreet Boys been up to since those glory days?

Obviously, those boys had too much talent and chutzpah to spend the following years sprawled on their sofa watching reruns of their MTV performances (which, TBH, I might have done had I been in one of the most successful boybands of the decade). Nope. These boys had all the talent, and they proceeded to completely dominate the diverse spheres of solo careerdom, fatherhood, modeling, entrepreneurship, acting, and ruling at being reality TV stars and all-round good guys. Heck, one of them even came close to winning Dancing With The Stars.

So let's review: what have our favorite boyband members been up to?

Vacations and gap years aren't really Nick Carter's cup of tea. The hardest working man in entertainment has worked nonstop in a whole host of careers. He broke into acting in 2004 in his role as the jockish bully Brody in the ABC Family Halloween special The Hollow, and, at Comic-Con 2015, he announced he would be filming and starring in a movie he had written: Dead 7 , a post-apocalyptic zombie movie. The movie sounds amazing; not only does it star his bandmates A.J. McLean and Howie Dorough, but it also stars boy band members from O-Town, 98 Degrees and *NSYNC.

Nick Carter has also been a huge name in the reality TV circuit, because the whole world is always and forever obsessed with him. Carter and his siblings appeared in the punnily titled House Of Carters in 2006, in 2014 Carter and his then-fiancee appeared in the reality show I Heart Nick Carter, and he came in second place in the 21st season of Dancing With The Stars.

And if that wasn't enough, Carter spent 2007 acting as the United Nations Special Ambassador for the Year of the Dolphin, in which he represented the United Nations Environment Programme, the Convention on Migratory Species, and the Whale and Dolphin Conservation Society. Also, oh yeah, no big deal, but he had a son with his wife Lauren Kitt.

Not one to rest on his laurels, Dorough recorded his own solo album Back To Me in 2011 and he got to tour with his pop-contemporary Britney Spears as a solo artist for her Femme Fatale tour in South America in the same year. Like Carter, he's also been on TV a fair bit. He's guest-starred on Sabrina The Teenage Witch, Roswell, and even got to be the voice of Santa Claus on Dora The Explorer. Besides all of that, Dorough's gone into business by founding a real estate development company, Sweet D. Inc. So, if you want a hotel built by a Backstreet Boy, this is an actual legitimate possibility.

Dorough, like Carter is a Backstreet Dad and has two sons.

There's a pattern here: McLean also pursued a solo career after the Backstreet Boys ended. However, there was one key difference: McLean used an alibi, Johnny No Name, presumably because the rock music he was offering was pretty different from the chart-friendly pop of the Backstreet Boys. He toured as Johnny No Name and has recorded his second solo album, Naked. It was meant to drop September 9, but, clearly channeling Frank Ocean, the album mysteriously is nowhere to be seen.

In terms of his personal life, McLean and his wife Rochelle Deanna Karidis have a baby daughter, Ava Jaymes McLean.

In 2012, goatee-haver Richardson started work on a — wait for it — solo album, but, since he re-joined the Backstreet Boys that year, so far this personal project has been placed on the backburner. Excitingly, Richardson enjoyed a successful career as a model and even worked for Versace and Vogue.

He's also an actor and has appeared in a vampire musical called The Bloody Indulgent and the movie Casserole Club. So, you know, all the talents. Most recently he appeared in 2016's If I Could Tell You, a short film about infertility. But clearly this isn't autobiographical: Richardson has two sons with his wife Kristin Kay Willits.

Richardson's cousin Littrell is a devout Christian, so it's no surprise that he would use his solo career to promote what he refers to as "pop positive" music. His first solo album Welcome Home (2006) would go on to reach number three on the Christian charts and sold over 100,000 copies. This led to him winning the 2006 GMA Dove Award for Inspirational Recorded Song of the Year for "In Christ Alone" (an award he shared with his co-songwriters Don Koch and Shawn Craig). He went on to win three more Doves for collaborative projects.

Littrell is married to model and actor Leighanne Wallace and they have a fourteen-year-old son, Baylee Thomas Wylee Littrell.

You guys, we all knew that this group was talented — but I'm not sure we realized how diversely talented they were. If you were concerned that these Backstreet Men would ever be forgotten about, you can rest easy. With this work ethic, sheer moxie, and entertainment connections, it looks like we'll be listening to Backstreet Boys solo albums for the foreseeable future.