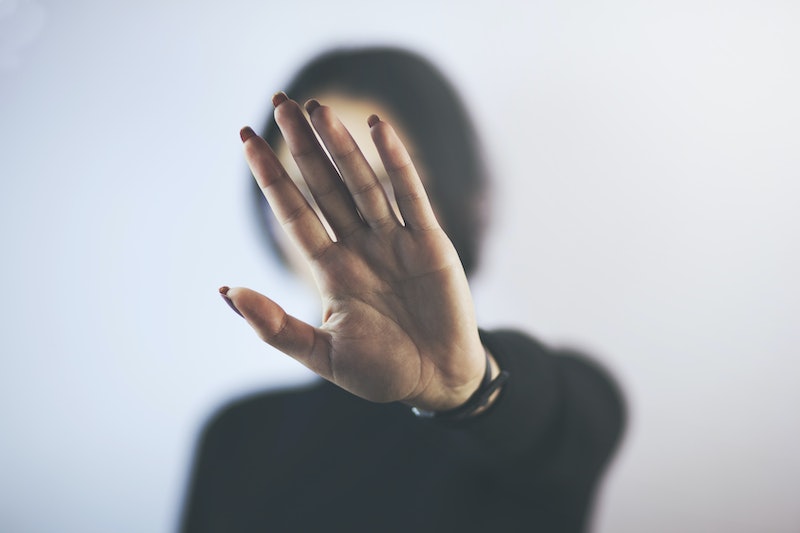 Following Brock Turner's early release from jail after serving half of his six-month sentence for convictions related to sexual assault, rape culture has been at the forefront of many minds. But campus rape takes place in far more settings than the stereotypical frat house — and one photography series, "It Happens" by Yana Mazurkevich for Current Solutions, tackles this discrepancy by showing the range of environments in which assault takes place. It's not just clubs and alleyways; in fact, it's often not clubs and alleyways. It's familiar places like bathrooms, dormitories, and classrooms, as well.

Mazurkevich, a junior at Ithaca College, created "It Happens" as a follow-up to another photography series, "Dear Brock Turner," which condemned the culture of victim-blaming and privilege that surrounded Turner's lenient sentence for three felony convictions (assault with intent to commit rape of an intoxicated or unconscious person, sexual penetration of an intoxicated person, and sexual penetration of an unconscious person). Each of the nine photographs in "It Happens" is accompanied by a statement from a survivor of sexual assault. Although the series references the circumstances of the Turner case — the final photograph shows a woman laying by a dumpster, along with a quote from the anonymous woman whom Turner assaulted — Mazurkevich tells Bustle she created "It Happens" with a bigger message in mind.

"Assault happens every single day, and by anyone, anywhere. I really wanted to emphasize that with this series, because it’s a topic that we do not discuss enough," she writes to Bustle over email. "Society believes that assault only happens to women. ... Assault happens to anyone, absolutely anyone."

Research has shown that sexual assault occurs across all demographics; to that end, the photographs depict a variety of genders and sexual orientations. The focus is on the victims, who look directly into the camera, rather than the person committing the assault. Mazurkevich says the choice to obscure the perpetrators' faces was intentional.

The series was published through Current Solutions, an organization dedicated to spreading awareness of sexual assault; their mission is to "help you safely voice your opinions and share your stories to educate others about gender inequality, domestic violence and sexual assault." A fair number of comments on the "It Happens" Facebook post exemplify rape culture, but Mazurkevich says the response to her series has been largely positive.

"The series is meant to be jarring, and it's meant to start a conversation, just like the stories that Current Solutions shares. With everything comes backlash, which there has been. The comments are angry and contain a fair amount of harsh words, victim blaming, and plain denying that a problem exists," she writes. "However, what's amazing to see is the response from my and Current Solutions' supporters, defending the series and defending survivors."

"The Current team has even received several new stories from people willing to open up, people who are saying they've been waiting for a way to tell their story [and] we are really encouraging more people to do the same," she continues. "It’s humbling and exciting that my art was able to deliver this sort of message and jumpstart the conversation."

Above all, the series accomplished what Mazurkevich set out to do: Ignite a discussion about sexual assault. "Just talk about [assault] with others," she urges. "Acknowledge it happens, and acknowledge that you have the power to prevent it by spreading awareness and educating the next generation."

More like this
5 Ways To Stand In Solidarity With Women In America From The UK
By Sophie McEvoy
How To Fight For Reproductive Rights, Based On How Much Time You Have
By Courtney Young
The Most Powerful Photos From The Weekend’s Abortion Rights Protests
By Melanie Mignucci
Why You're Seeing Green Bandanas At Abortion Rights Protests
By Lexi Inks
Get Even More From Bustle — Sign Up For The Newsletter